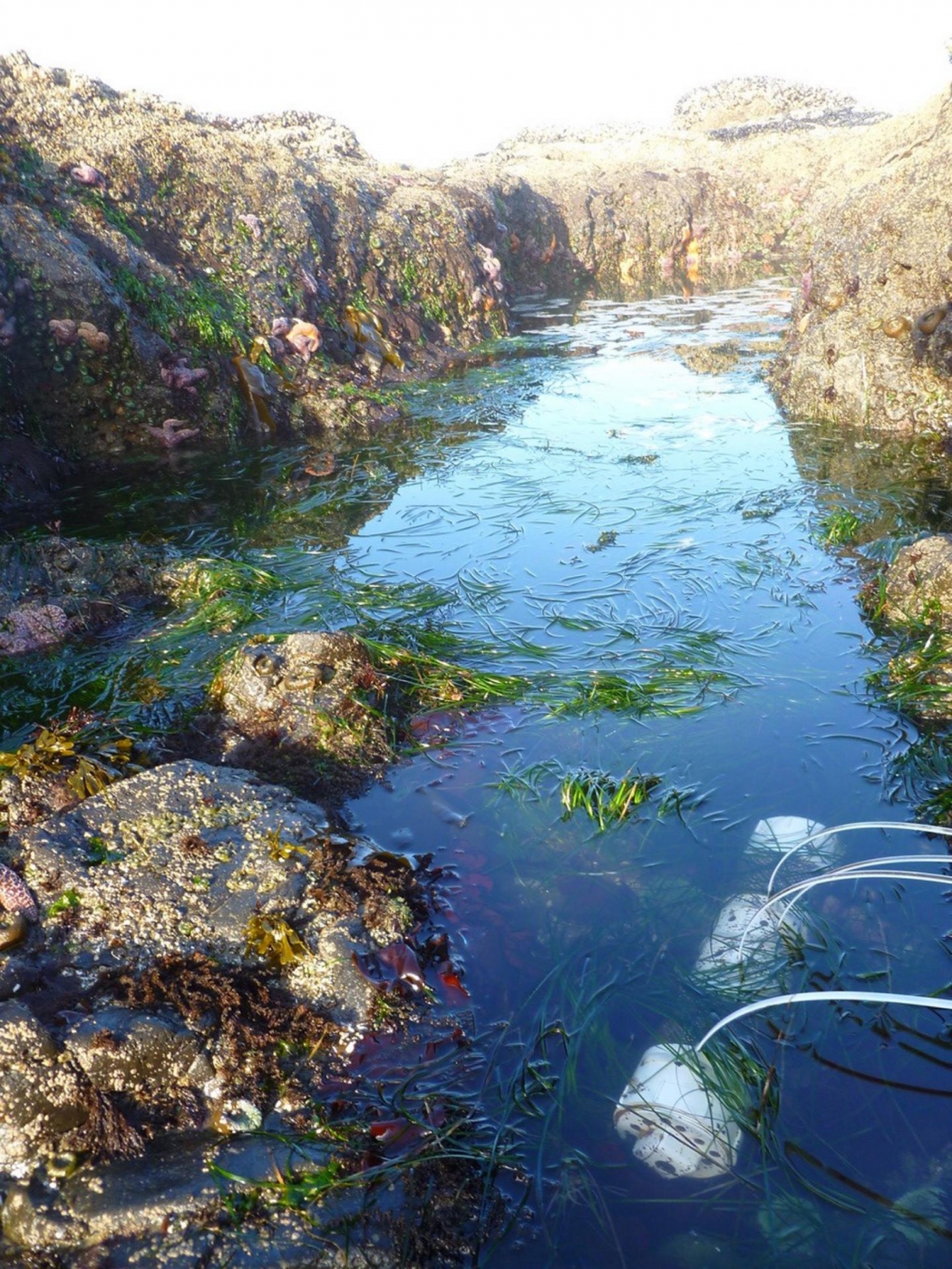 One of the sensors used to monitor levels of ocean acidification along the Oregon coast. Credit: Oregon State University

Hotspots of ocean acidification have been found in the waters that wash onto the shores of the West Coast, a major concern for the region’s billion dollar fishing industry as well as the region’s potentially fragile coastal ecosystems...

A new study of a 600-mile span of coastline found some of the lowest pH levels ever measured on the ocean surface, showing that significant acidification can be found in waters right along the shore.

But the news from the study, detailed May 31 in the journal Scientific Reports, isn’t all bad: Some areas had more moderate pH levels, and both these and the hotspots persisted in the same areas from year to year. This could give researchers and officials looking to protect marine life a map of where to concentrate efforts to mitigate against rising ocean carbon dioxide levels.

Ocean acidification is the often-overlooked partner to global warming and is driven by the same human-caused emission of carbon dioxide that is driving the rapid rise of global temperatures. The ocean absorbs much of that excess carbon dioxide, and as it does so, the pH of the ocean water declines, meaning it becomes more acidic (just as CO2-laden soda is more acidic than regular water).

As the ocean acidifies, it becomes difficult for shelled organisms such as oysters and clams to build their shells, as well as for fish to breathe. Some of the species that could be most impacted, particularly phytoplankton, sit at the base of the ocean food chain, potentially taking away a key food source for many other species, including some that are most economically valuable, such as salmon and black cod.

The waters off the West Coast of the U.S. are particularly vulnerable to acidification because they feature cold water upwelling from deeper in the ocean. Cold water is better at absorbing CO2 (which also makes acidification in the frigid waters of the Arctic a major concern for marine life there). The cold, upwelling waters also provide abundant nutrients and make the area a rich spot for marine life.

Offshore acidification had been studied before, but with the new study, “we literally took that picture and we moved it all the way to the surf zone,” Chan said.

Multiple institutions joined to install sensors in the coastal waters from Monterey Bay to just north of Newport, Ore. The sensors monitored conditions for the three years from 2011 to 2013 and found clear evidence of intense acidification.

Waters fell well below the global average ocean pH of 8.1, with the worst-hit areas measuring 7.4, among the lowest values ever recorded in surface waters.

“The bad news is that we have acidified, compromised water,” Chan said.

But, crucially, “it’s not the same everywhere,” he said. The sensors showed distinct spatial patterns of hotspots and areas where levels were more moderate, and, particularly striking, those areas stayed as hotspots, or relative refuges, “year after year after year.”

Why certain areas have been hit hard and others haven’t wasn’t a focus of the study, but Chan said it likely has to do with the interactions of winds and ocean currents. Some of the sensors from the study are still in place, and Chan is working with citizen scientists in marine reserves in Oregon to better understand local conditions.

He thinks that this same persistent pattern of hotspots and refuges probably isn’t confined to the West Coast. “I think that that’s something that’s going to hold for everywhere in the world,” he said.

Such detailed information is useful for local officials trying to mitigate the impacts of ocean acidification. They can use the maps generated to see where local stressors, such as pollution, might be making conditions worse. They can target the worst-hit areas, while working to ensure that the relative refuges stay that way. Strategies could include limiting local pollution and maintaining healthy kelp beds and sea grasses, which are thought to help mitigate the impacts of acidification. 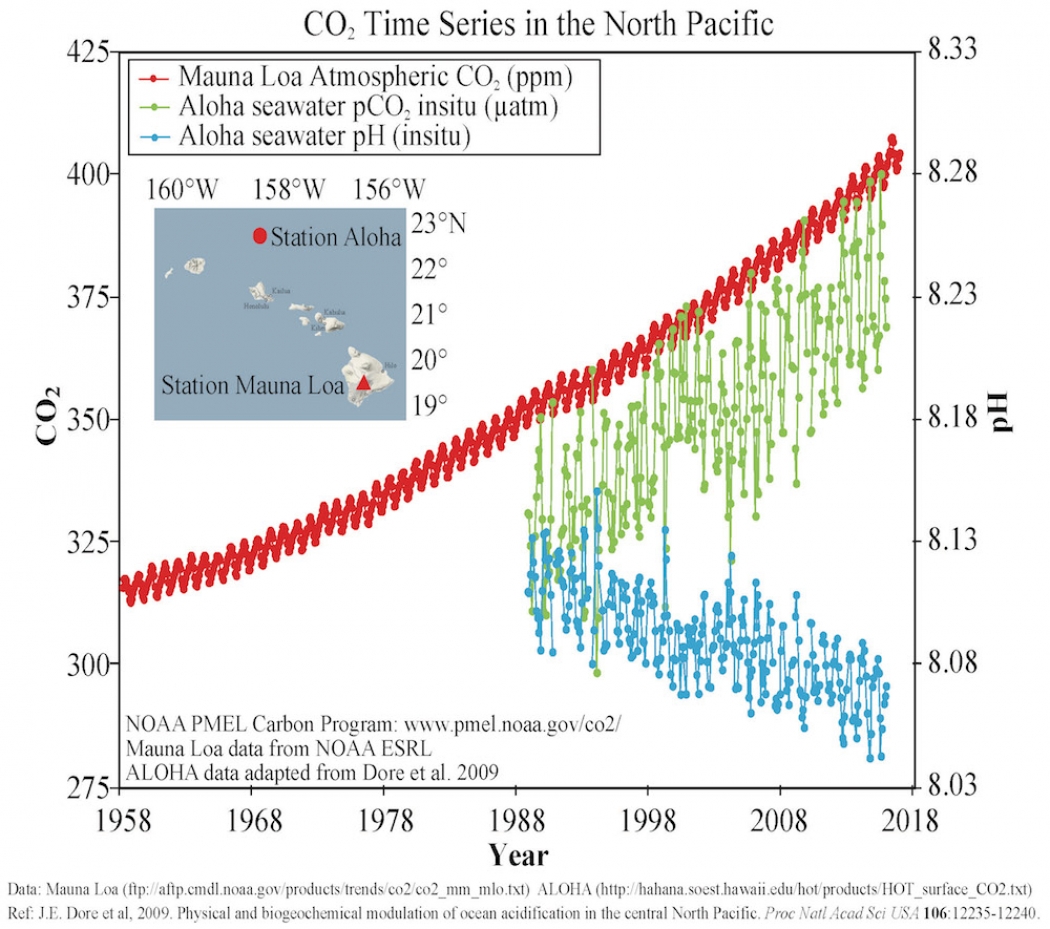 As atmospheric carbon dioxide levels have risen (in red), the ocean has absorbed some of that CO2 (in green), lowering its pH (in blue). Credit: NOAA

Chan was part of a panel of scientists convened by California, Oregon, Washington, and British Columbia to look at the issue of ocean acidification along the West Coast and whether any mitigation could be done on the local and regional level.

Since the April 2016 release of the panel’s report, two bills have already passed in California to reduce the impacts of ocean acidification and promote its research. A bill to establish an ocean policy council is currently moving its way through Oregon’s government.

The Pacific Northwest has been one of the most proactive regions of the U.S. in dealing with ocean acidification, in part because of an oyster hatchery crisis a decade ago. One hatchery saw an 80 percent decline in oysters because of acidic waters. In response, the industry and regional governments implemented an early warning system so that hatcheries can take measure like treating water to prevent damage to their oysters.

Chan has spoken with oyster farmers in Washington about how they might use the coastal acidification maps his work has generated and what they would do if the area they grow oysters in turned out to be a hotspot. Oysters, like wine, have a specific terroir, or flavor, based on where they’re grown, which would seem to make oyster growers reluctant to relinquish their favored spots.

But their response surprised Chan. They said they’d move.