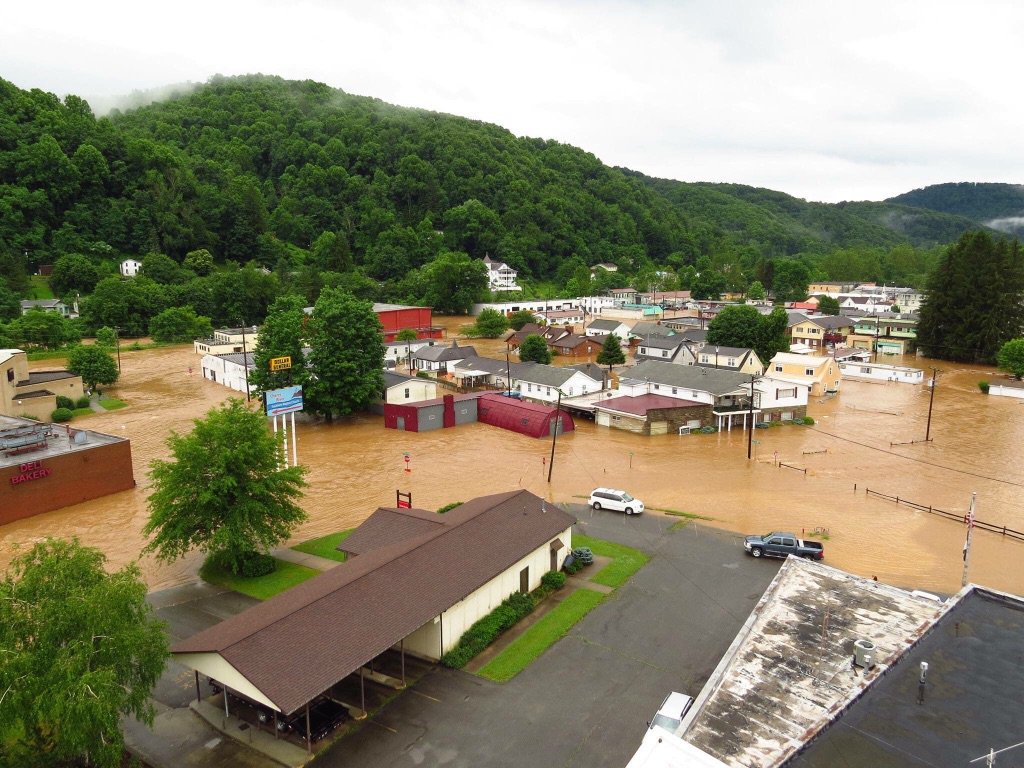 Some of the worst flooding in West Virginia "in 100 years" has left at least 23 people dead, including two children...

Some of the worst flooding in West Virginia "in 100 years" has left at least 23 people dead, including two children.

Tens of thousands of residents were left without power and many roads were impassable after nine inches of rain came down on Thursday, officials said. The hardest hit counties include Greenbrier, Nicholas, Fayette, Kanawha and Webster. In Greenbrier, a flaming house could be seen floating down a creek.

Approximately 100 homes have been damaged, and the death toll rose to 23 by Friday night, WCBH-TV reported.

His address came as the deluge brought unprecedented damage to the Mountain State.

Jimmy Scott gets a hug from Anna May Watson as they clean up from severe flooding in White Sulphur Springs in West Virginia on Friday. (Steve Helber/AP)

An 8-year-old boy and a 4-year-old boy who were swept away in different counties, authorities said. The death toll was expected to increase, said Cahill, who described "complete chaos" in his county.

"Today's just an accountability mission, trying to verify where everybody's at and follow up on missing person tips," Cahill said. "It's really hard to navigate around because there's just a ton of debris. We've even had rescuers that had to be rescued."

The body of 8-year-old Emanual Williams, known as "Manny," was found after he fell into Big Wheeling Creek on Thursday, said Wheeling pastor Harry Croft.

Anna May Watson hugs a relative as they clean up from severe flooding in White Sulphur Springs.(Steve Helber/AP)

Manny's mother told him that she was walking across the creek with her son and daughter because Manny wanted to catch crayfish. One of the kids slipped, and the mother grabbed both the boy and his sister in the swift current.

"She lost her grip on Manny," the pastor said.

The 4-year-old boy, identified by NBC News as Edward McMillion, was found about a quarter mile from where he fell into a creek, which usually runs about ankle deep but rose to about 6 feet deep when Jackson County was pounded with rain.

The boy was outside with his grandfather, who jumped in after the boy but the water was rushing too quickly. Neighbors, alerted by screams, tried to help save the boy but were also unable to reach him.

Belinda Scott had fled to the attic after smelling gas, though her house then blew up and killed her two dogs.

She held on to a tree for more than four hours before being rescued, and is currently hospitalized with burns on 67% of her body, her husband Ronnie said.

A state of emergency was issued Thursday for 44 of the 55 counties in the state. Tomblin authorized the deployment of up to 200 members of the West Virginia National Guard to help local emergency responders.

"We had swift water rescue teams out until late last night and back out again his morning literally rescuing people from rooftops and upper stories of houses," he said.

Tens of thousands were left without power in West Virginia after devastating flooding.(West Virginia Dept. of Transport/via Twitter)

One of those rescued from the top of his roof was Paul Moya, who is diabetic.

"I'm still shaking," he told CBS News from the hospital. "I really just want to break down and cry right now. All I could see was the homes burning and the electrical poles burning. I think I could say that now I was scared."

Pro golfer Bubba Watson was at the resort and tweeted photos of entire holes underwater: "Prayers for @The_Greenbrier & surrounding areas. We are without power & it's still raining. Never seen this much rain! #WestVirginiaBeSafe."

Eric Blackshire was able to get to safety when volunteer firefighters used a rope to guide people down a hillside.

"It was kind of like a hurricane party. I guess you could call it a flood party. There were lots of beers being drank last night," he said.

Kanawha County Sheriff's Office spokesman Sgt. Brian Humphreys said a temporary bridge may be needed to get everyone out.

At least four people are dead in the flooding. (West Virginia Dept. of Transport/via Twitter)

Richwood Mayor Robert Johnson said there was extensive damage to his city. "We pretty much live in a bowl, and the bowl filled with water, certainly," he said.

Some areas were looking at flooding "that's going to be the worst in 100 years," said Chris Stadelman, Tomblin's communications director.

"My mother-in-law has lived here for 80 years, and this never happened before," Mark Burgess of Elkview told NBC News. "There is nothing you can do. We can call for help if it's too deep, but it's OK right now."

A dam at Summit Lake was operating normally but was being watched closely, the Gazette Mail reported. "The dam is still there. It is still functioning the way it is supposed to function," Ray Torres, deputy forest supervisor at the U.S. Forest Service headquarters in Elkins, told the paper.

Across the state line, the crisis is nearly as dire in Virginia. Gov. Terry McAuliffe declared a state of emergency due to the flooding in Alleghany County and Covington.

The Virginia Department of Transportation warns that more than a dozen Alleghany County roads were closed Friday morning. There were approximately 1,700 customers without power statewide.

"It's really bad. There's a raging river," Alleghany County Chief Sheriff's Deputy Matt Bowser told NBC News. "There's 500-gallon oil tanks and trash cans and gas cans and tree trunks floating down the river where people's backyards are. You can see people in the second-story windows waiting to be evacuated."

With TOBIAS SALINGER
source: http://www.nydailynews.com/
original story HERE
To see our most current positions, opinions, comments, agreement or disagreement with this article, and/or possible criticisms related to the subjects or facts raised in the above article, click here.  Then look for those subjects in the navigation links at the top the page. To learn about more about global warming, climate change or greenhouse gases as well as the causes, consequences, solutions, definitions, facts and tipping points related to these subjects, click here.
To automatically be emailed a summary of the latest news on global warming, sign up for our Global Warming Blog by clicking here. (Put your email address in the Global Warming Blog Subscribe box at the bottom right of the page.)
To sign a critical petition for declaring a national and international global warming State of Emergency, click  here