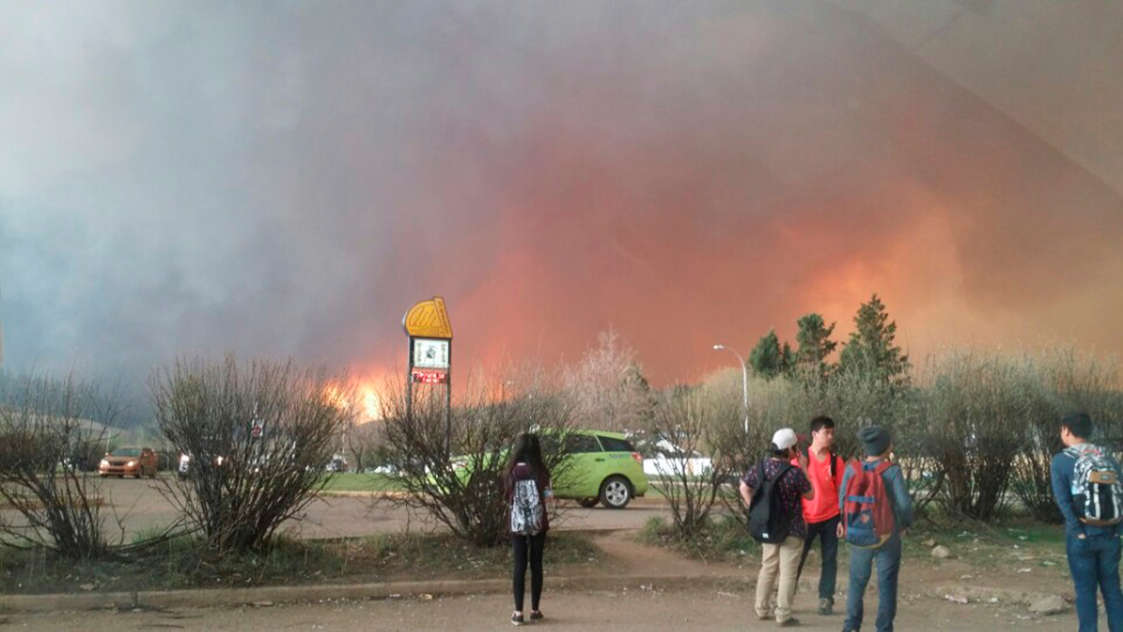 Wildfires have led to evacuation notices for hundreds in Alberta, as crews continue to battle several blazes and experts say the dry temperatures could make for a long and brutal fire season...

A wildfire raging in Fort McMurray prompted mandatory evacuation orders for several communities in the area. While recent fires in B.C. also led to evacuation notices for a few areas.

The premature start to the wildfire season has already led to 311 fires in Alberta, according to the province’s Ministry of Agriculture and Forestry. There has been approximately 192 fires in B.C.

“It’s way drier this year than it’s been for a long, long time,” Darby Allen, an Alberta regional fire chief told reporters Monday. “It’s really dry. We need to have discussions on what we can do about trying to encourage people not to light fires and go out in the bush.

“[Wildfires] have certainly come more ferociously in the years gone by. We’ve had four significant fires in the last five days or so and that is pretty intense.”

“Because spring came about a month early here, we are already in the middle of our prime fire season for the spring,” said Mike Flannigan, a wildfire expert at the University of Alberta. “Given the already dry conditions means it’s easier for fires, once they sustain themselves, to go underground until it gets windy and they re-appear.”

Following a media briefing this morning, Regional Emergency Services, Mayor Melissa Blake and Alberta Forestry have provided an update and addressed questions about the forest fire events north and west of Fort McMurray.

Flannigan said conditions have been so dry some fires have burned two metres into the ground, forcing firefighters to dig out the fires or flood the ground with water.

“The wildfire season is off to a very active start. Is the rest of the season going to be like this? It’s hard to tell,” he said. “But if you believe the seasonal forecasts and the fact that El Nino is still kicking around, odds are we are going to have a very active fire season.”

Judith Kulig, professor in the faculty of health sciences at the University of Lethbridge, said the effects of climate change are also driving the increase in wildfires, and it’s not going to get better in the future.

“The whole aspect of climate change and global warming, which is then interrelated things such as insect infestation, so pine beetle increases because it’s not a cold enough winter,” she said. “The trees are infested and drier and more prone to fire.

“In general, we’ve had less rainfall; we didn’t really have a winter this year. And so consequently we have a very dry environment.”

Meanwhile in B.C. the dean of University of British Columbia’s faculty of forestry, said the biggest worry for the province is the limited snow pack.

“Certainly in the [B.C. interior] there isn’t much snow pack, so the amount of snow that is available is very little and as a result we will see ecosystems drying out quite quickly early in the season,” said UBC professor John Innes. “That could be a signal of very severe fires to come.

“The shortage of snow in the interior is an El Nino related phenomenon.”

But Alberta wildfire officials got a jump on the long and busy season by declaring March 1 as the official start date to the forest fire season, up one month from the traditional start date of April 1.

The official date requires Albertans to get permits for any burning, and training for wildfire crews will begin.

“It puts it in the public’s mind that this is an issue that needs to be addressed, we all need to be careful,” she said.

Flannigan also said education on fire prevention and fire bans or restrictions are necessary in fighting the upcoming fire season.

By Andrew Russell National Online Reporter  Global News
source: http://globalnews.ca/
original story HERE.
To see our most current positions, opinions, comments, agreement or disagreement with this article, and/or possible criticisms related to the subjects or facts raised in the above article, click here.  Then look for those subjects in the navigation links at the top the page. To learn about more about global warming, climate change or greenhouse gases as well as the causes, consequences, solutions, definitions, facts and tipping points related to these subjects, click here.
To automatically be emailed a summary of the latest news on global warming, sign up for our Global Warming Blog by clicking here. (Put your email address in the Global Warming Blog Subscribe box at the bottom right of the page.)
To sign a critical petition for declaring a national and international global warming State of Emergency, click  here!