WHAT AN ANCIENT COMET COLLISION TEACHES US ABOUT GLOBAL WARMING... 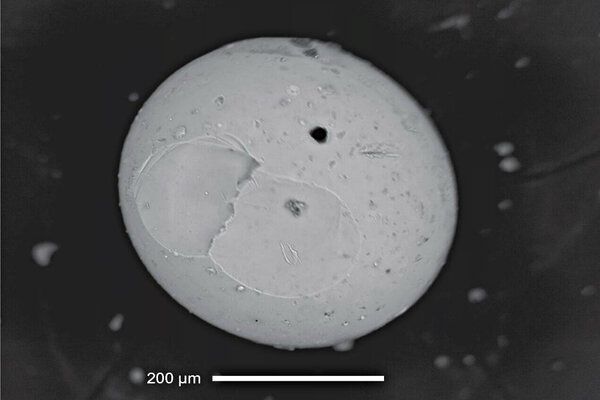 A comet impact 56 million years ago on Earth contributed to global warming, say scientists after studying tiny glass spheres, or microtektites, found in ancient sediment from a period of massive climate change...

This event is known to scientists as the Paleocene-Eocene Thermal Maximum (PETM), a period in which the Earth exhibited signs of ancient global warming. Without humans to contribute carbon dioxide and other gasses to the atmosphere, however, what could have caused this shift?

A team of American researchers went back to the basics in their search for an answer: They examined sediment from that time period in search of clues. What they found were microtektites, small, glassy, spherical pieces that are usually formed during asteroid impacts.

Recommended: Could you pass Astronomy 101? Take the quiz!

"This tells us that there was an extraterrestrial impact at the time this sediment was deposited – a space rock hit the planet," Morgan Schaller, the co-author of a paper published Friday in the journal Science and an assistant professor of earth and environmental sciences at the Rensselaer Polytechnic Institute, said in a press release. "The coincidence of an impact with a major climate change is nothing short of remarkable."

Microtektites can form when an extraterrestrial impact occurs, melting and vaporizing the ground, and throwing molten ejecta into the air, where they solidify before falling down. Some of the microtektites contained "shocked quartz," a sign of intense pressure.

The size of the strewn field, or the area in which microtektites are found, can be indicative of the size of the impact. In this instance, study authors found the tiny spheres along the East Coast in New Jersey and Bermuda, about 700 miles apart.

While scientists are not definite about the link between the dramatic climate shifts and the impact that could have created the microtektites, the new paper's team argue that evidence could possibly indicate causation. Comets carry a carbon isotope known as Carbon-12, which became abundant in the PETM era, as temperatures and ocean levels climbed.

One of the study’s authors, Earth magnetism researcher Dennis Kent, has argued for more than a decade that a comet might have triggered ancient climate change. Dr. Kent believes that a comet impact like the one that created the microtektites could have released carbon into the atmosphere, triggering a feedback loop that rapidly warmed the Earth, The Washington Post reports.

Other scientists, however, say that it is unlikely that the relatively small impact indicated by the microtektites would have caused such a massive climate shift. Other explanations include increased volcanism.

Alongside the massive climate shift came the extinction of dozens of species, and the proliferation of mammals and other animals that might seem more recognizable to us today. The BBC reports that higher world temperatures allowed these animal species to spread across the globe and expand their range towards the poles.

While modern humans hardly spare a second thought for potential extraterrestrial impacts, comets and meteors still speed by the Earth, from a massive meteor impact off the coast of Brazil to a huge comet that passed by the Earth in March, to relatively little fanfare.

Yet while modern scientists may be concerned about some future impacts, the team involved in the discovery of the Atlantic microtektites were excited.

"I went to the lab and dumped a sample on the sorting tray without sieving it, and there it was," Dr. Schaller said, according to a press release. "It was a stunning moment. I knew what I was looking at was not normal."