AS LOUISIANA FLOODWATERS RECEDE, THE SCOPE OF DISASTER COMES INTO VIEW... 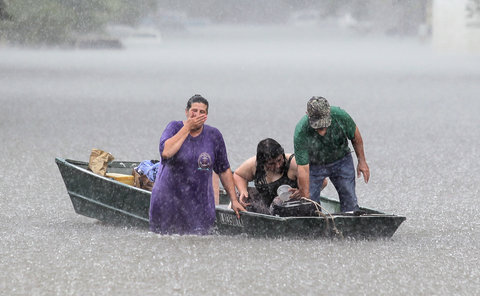 DENHAM SPRINGS, La. — Kathryn Morgan, 18, stood on the shore of the neighborhood, waiting for a boat and taking stock... 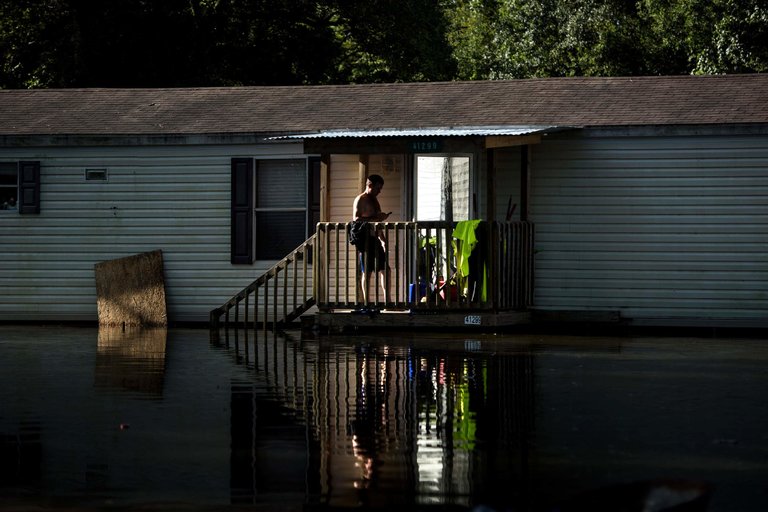 Home, truck, school, workplace, her friends’ homes: all gone, flooded out. There was less certainty about the fate of her dog, left days ago with some food in a portable kennel. Or the bassinet and piles of baby clothes left behind when she and her 5-week-old daughter, Charlie, were picked up in a boat and taken to the safe and dry second story of her godmother’s home.

“It’s Louisiana, we always expect the ditches to fill when it rains,” said Ms. Morgan, who was returning from the first supply run in three days. This was not just the ditches. “It’s like a hurricane,” she said. “But without any warning.”

As the receding floodwaters continued to expose the magnitude of the disaster the state has been enduring, Louisiana officials said Tuesday that at least 11 people had died, and that about 30,000 people had been rescued. Gov. John Bel Edwards acknowledged that the state did not know how many people were missing, but he said that nearly 8,100 people had slept in shelters on Monday night and that some 40,000 homes had been “impacted to varying degrees.”

“We are still very much in an emergency, search-and-rescue response mode for much of the Florida parishes,” Mr. Edwards said, referring to an eight-parish area east of the Mississippi River. “Saving life is the most important priority that we have. We’re going to dedicate every available response to that effort until it’s no longer required.”

In Louisiana, severe weather can often seem a trauma visited and revisited. But the disaster unfolding here this week fits into a recent and staggering pattern in more than half-dozen states, where floods have rolled out at such a scale that scientists say they might be a once-every-500-or-1,000-year occurrence. The cumulative, increasingly grim toll, from Maryland to South Carolina to Louisiana to Texas, includes scores of lives and billions of dollars in economic losses.

Severe flooding across Louisiana has turned deadly, forcing thousands to evacuate their homes and leaving many in need of rescue.Everywhere the same refrain — that it has never happened like this — has given rise to the same question: How should communities and families plan for deluges that are theoretically uncommon but now seem to play out with appalling regularity?

“We’ve clearly had a rash of these things in the last year; in the last 12 months, it’s just been incredible,” said Barry D. Keim, Louisiana’s state climatologist. “We’re learning a lot, but, unfortunately, it’s flooding a lot of people and causing a lot of problems.”

In Livingston Parish, which recorded more than 25 inches of rain in three days, unearthed coffins floated down main streets, and elementary schools became islands of shelter. The parish president’s house was flooded out, even though the house was not located in the federally designated flood zone when he moved into it — two weeks ago.

“Grab what you can and get out,” is what the president, Layton Ricks, recalled a man telling him as he stood in the deepening lake of his driveway on Friday night. “This is going under.”

In an interview at the parish government building, Mr. Ricks played down his troubles, talking instead, between catches in his voice, of the staggering challenges faced by the poor and newly homeless of his parish.

“What do they do?” he said, asking for them as much as for himself as the parish’s chief executive. “It’s ungodly what happened.”

Photographs and maps show the scale of the disaster in southern Louisiana. 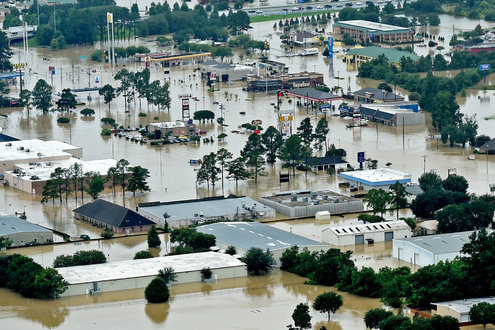 After the interview, Mr. Ricks walked down the hallway to a small gathering of senior state and parish law enforcement officials. They hugged, and some wept.

Just to the west in Baton Rouge, Louisiana’s capital, federal and state officials also grappled Tuesday with how to manage the fallout from the unnamed storm system that experts said carried enough precipitation to rival a hurricane.

The administrator of the Federal Emergency Management Agency, W. Craig Fugate, described the situation in Louisiana as “a very large disaster,” and the East Baton Rouge Parish authorities imposed a curfew from 10 p.m. to 6 a.m. Residents of 20 parishes are already eligible for federal disaster assistance.

As Louisiana on Tuesday faced its second catastrophic flood in about five months, climate scientists elsewhere cautioned that the state was unlikely to be the last to confront a disaster like this one.

“There’s definitely an increase in heavy rainfall due to climate change,” said John Nielsen-Gammon, the state climatologist in Texas. “The actual increase from place to place is going to be variable because of the randomness of the weather. Some places will see a dramatic change.”

The blend of climate change and development in new areas has led to particularly dire flooding in places where storm-water systems were designed by people who were “assuming it was always going to rain the same way as 40 years ago,” said J. Marshall Shepherd, a professor at the University of Georgia and a former president of the American Meteorological Society.

In Denham Springs, La., some residents returned home and found many of their belongings destroyed by flooding.

By THE ASSOCIATED PRESS on Publish Date August 16, 2016. Photo by Jonathan Bachman/Reuters. Watch in Times Video »

Despite years of warnings, and long histories of planning for emergencies, officials in saturated cities and counties have often found themselves responding to far graver challenges than they imagined. A strategy for a flash flood that comes and goes within hours can hardly keep pace when record rains fall, and plans for action are often refined on the fly.

“We had a template before this disaster even happened,” said Allan H. Kittleman, the county executive in Howard County, Md., which had severe flooding last month. “Of course, you have to tweak it.”

In Louisiana on Tuesday, the miseries varied by geography. In Ascension Parish, officials were still handing out sandbags and urging evacuations. In Baton Rouge, the chore for emergency workers was going door to door to find the unreported missing, injured or dead. In Livingston Parish, the task had changed from a frantic flight to safety to attempts at return that were expected to end in heartbreak.

“It’s not an emergency now,” said David Truxillo, 51, who pulled up to a submerged road with his wife, both of them with pistols on their hips and both debating whether a truck could make it through the water at this height (it could not, they decided).

“It’s trying to see what we got left,” his wife, Tina, said. Definitely not the beehives in the backyard, the motorcycles, the camper or the shed. Maybe not the house.

In a subdivision across this slowly resurfacing town, a team of family and friends were helping drag everything out of Jim Bridges’s waterlogged house, to which he had finally returned on Tuesday afternoon. Chairs, a television, beds, books, a piano, all of it in a long pile, like a barricade stretching across the front lawn.

“For us to flood, half of Denham would have to flood,” Mr. Bridges, 70, recalled telling a concerned new neighbor a few years ago. He sighed. “A lot more than half of Denham flooded.”

By CAMPBELL ROBERTSON and ALAN BLINDERAUG. 16, 2016