WHAT HAPPENED NEXT TO THE GIANT LARSEN C ICEBERG???

Scientists have revealed exactly how the trillion-tonne A68 iceberg broke free of the Antarctic ice shelf last month – and say it has spawned smaller icebergs... 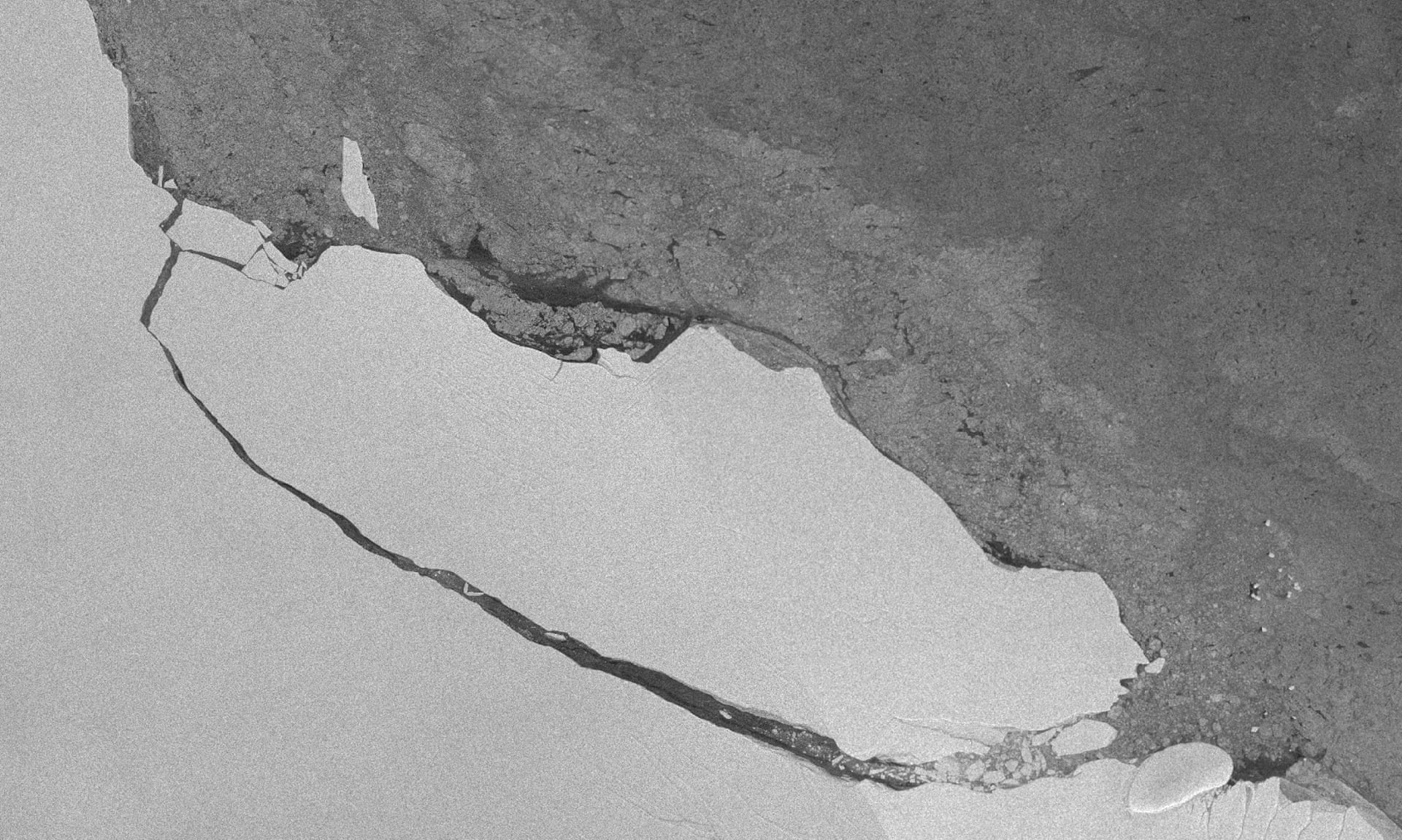 View of the A68 iceberg on the 30 July 2017, taken from a European Copernicus Sentinel-1 satellite image. Photograph: A. Fleming, British Antarctic Survey.

The fate of the giant iceberg that broke free from Antarctica’s Larsen C ice shelf last month has been revealed.

Twice the size of Luxembourg, the trillion-tonne iceberg known as A68 was found to have broken off the ice shelf on 12 July after months of speculation about a rift which had been growing for years, with the iceberg “hanging by a thread” for weeks.

How significant is the release of the Larsen C megaberg?

At 5,800 sq km it is one of the largest icebergs ever recorded, with its calving leaving the Larsen C ice shelf about 12% smaller in area and at its lowest known extent.

“The really interesting thing is that it didn’t just break through in one clean shot, it formed a lace-network of cracks first and then we were all waiting on tenterhooks to see which one would be the final pathway,” said Dr Anna Hogg, an expert in satellite observations of glaciers at the University of Leeds and member of the Centre for Polar Observation and Modelling.

Based on radar data from the European Space Agency’s Sentinel-1 mission, Hogg says there are now at least 11 smaller icebergs floating near A68 – fragments thought to have broken off the enormous tablet of ice, or from the Larsen C ice shelf itself, possibly as a result of A68 bumping against the shelf.

“I am calling them ‘small bergy bits’ but the largest ones are bigger than 10km long, which is actually a colossal piece of ice in its own right,” said Hogg.

And the remaining cracks in the ice shelf have not remained static either. “They have continued to grow and extend a bit still,” she said. “Since the iceberg has broken free there has still been some continuing activity on the remaining ice shelf so we are really interested to continue to monitor that.”

What’s more, the iceberg appears to have drifted away from the ice shelf, with a gap of about five kilometres now visible between the two. “That would suggest that [the iceberg] is floating in the ocean – it is not currently grounded,” said Hogg, adding that there are a number of options for the future of A68: it may break up into smaller pieces, get pushed around by the winds, or be steered by the ocean currents.

“We think that this berg is about 200 metres thick of ice, and of course 90% of that is beneath the ocean surface, so it is possible it could become grounded,” she added.

The latest update comes as Hogg and her colleague Hilmar Gudmundsson from the British Antarctic Survey release a commentary in the journal Nature Climate Change exploring the implications of the loss of such huge icebergs on the future stability of ice shelves like Larsen C.

The new data, says Hogg, shows that the remaining forking cracks in the Larsen C ice shelf are growing in the direction of a feature known as the Bawden Ice Rise – an outpost which supports the ice shelf, a little like scaffolding, or the pillar of a building’s facade. Should the cracks continue in a straight line and the ice shelf break around such a point, she adds, the support would be lost, a result that could greatly reduce the ability of the ice shelf to act as a buttress, and hold back the flow of glaciers into the sea.

“If the ice that is resting on those pinning points does break off, that is definitely a concern,” said Hogg.

But experts including Hogg have been quick to point out that calving events like that which occurred in July are part of the natural life cycle of an ice shelf and are not necessarily influenced by climate change.