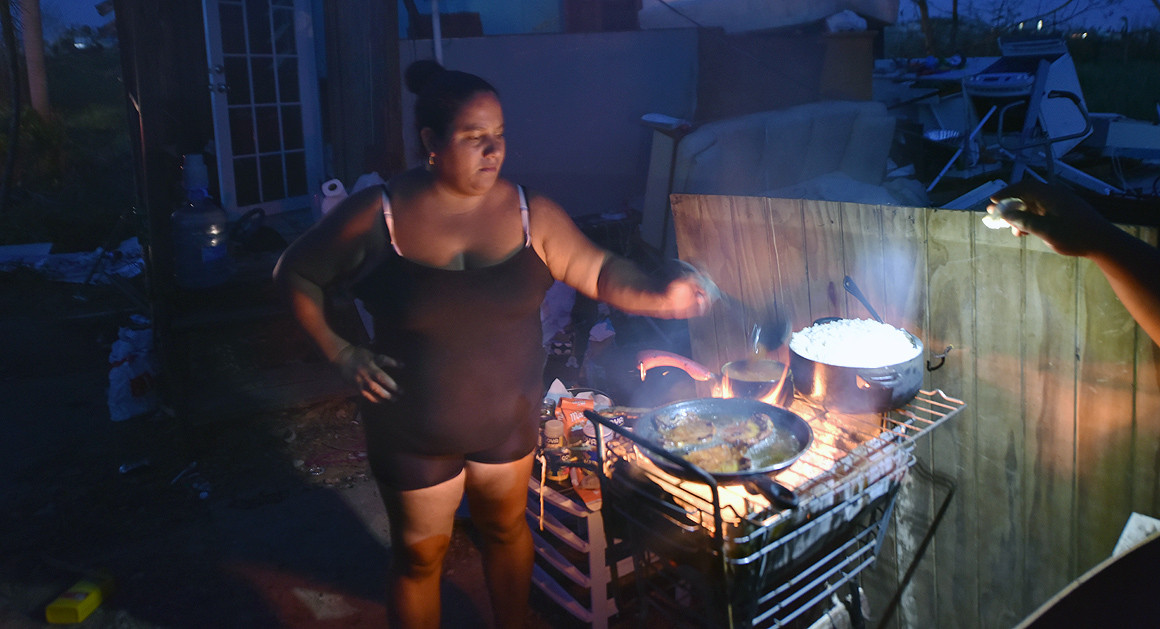 A woman named Maria prepares food next to her home, destroyed by Hurricane Maria. The island has no electricity. Congress approved a massive hurricane relief package six days after Harvey hit Texas — yet appropriators appear weeks away from an aid request devoted to Puerto Rico. | Hector Retamal/AFP/Getty Images

The administration contends that much of Puerto Rico and the U.S. Virgin Islands is so damaged that officials can't even begin damage assessment...

The White House is likely weeks away from a formal funding request for Puerto Rico, as the storm-ravaged island enters its sixth day without power, according to Trump administration and congressional sources.

Senate Minority Leader Chuck Schumer is demanding that lawmakers approve a disaster aid package by week’s end to help Puerto Rico and the U.S. Virgin Islands recover from Hurricane Maria. But aides familiar with the devastation on the Caribbean islands say the government is far more focused on delivering resources right now than getting more cash from Congress.

“The thing is, funding doesn’t help them. Getting people and supplies there is what needs to happen,” one administration aide said Tuesday. “There’s no crunch in the short term for cash.”

Still handling three simultaneous hurricane relief efforts, FEMA’s staff is stretched thin. But the agency’s disaster relief fund is still flush after Congress provided $15 billion in disaster aid, H.R. 601 (115), earlier this month, as well as another $6.7 billion that will kick in at the start of the fiscal year Oct. 1.

Advocates argue that funding for FEMA doesn't mean Puerto Rico's government can pay its own bills, however, including its already depleted Medicaid program.

While the federal government continues to calculate a damage estimate, responders deployed to the region are focused on logistics like getting food and water to millions of people who remain without power as temperatures hit 90 degrees and humidity hovers above 70 percent.

The administration contends that much of Puerto Rico and the Virgin Islands is so damaged that officials can't even begin damage assessment, meaning the federal government may not know for weeks how many roads, buildings or power lines will need to be rebuilt.

“The issue is not paying for any of this,” the administration source said. “It’s like: Paying for what?”

But Democrats say the administration’s response is already wholly anemic, accusing President Donald Trump of taking potshots at the ailing islanders while neglecting to deploy the full force of federal resources.

“We have the greatest military the world has ever seen,” Rep. Joe Crowley (D-N.Y.), chairman of the Democratic Caucus, told reporters on Tuesday. “We know how to invade other nations. We know how to bring that equipment in. We have paratroopers. We have sailors. We have Marines. We have men and women who would want to help their fellow countrymen in their time of need. It’s time for the president to invoke that and to bring that type of response.”

Trump said Tuesday that he plans to travel to Puerto Rico early next week to survey damage, more than a dozen days after Maria compounded devastation wrought by Hurricane Irma earlier this month.

The president has fielded criticism for neglecting to visit the islands as quickly as he arrived in Texas and Florida following Hurricanes Harvey and Irma. But he told reporters at the White House on Tuesday that his administration is “getting really good marks for the work we’re doing” in Puerto Rico and the Virgin Islands.

Congressional Democrats have derided Trump for focusing on the NFL’s national anthem controversy in the wake of the disaster and noting Puerto Rico’s financial issues. “Texas & Florida are doing great but Puerto Rico, which was already suffering from broken infrastructure & massive debt, is in deep trouble,” Trump tweeted late Monday.

Rep. Nydia M. Velázquez (D-N.Y.), who is the first Puerto Rican woman to be elected to Congress, said she is “offended and insulted” by the president’s tweet.

“If you don’t take this crisis seriously, this is going to be your Katrina,” Velázquez told reporters Tuesday about Trump, suggesting the president appoint a military general to organize comprehensive emergency response.

Rep. José E. Serrano (D-N.Y.) said Tuesday that he has gotten commitments from House Appropriations Chairman Rodney Frelinghuysen (R-N.J.) and House Speaker Paul Ryan that Puerto Rico and the Virgin Islands will be “treated equally in any funding package to come.

“You can’t look at this funding and say, ‘Whatever is left over can go to the Virgin Islands and Puerto Rico.’ No — it has to be equal to Texas, to Florida, to Louisiana, to Georgia. …” Serrano said. “Now it’s incumbent on us to stay on top of the leadership to make sure that a certain segment of the other party doesn’t break this promise that the speaker and the chairman of Appropriations have put out.”

In Puerto Rico, another desperate plea for help
Congress approved its massive hurricane relief package on Sept. 8 — six days after Harvey made landfall in Texas — yet appropriators appear weeks away from an aid request devoted to Puerto Rico.

The White House believes there is “plenty of money” for the hurricane response in the short term, an administration aide said, acknowledging that much more will be needed in the months to come.

While White House officials plan to discuss that longer-term funding strategy this week, even a back-of-the-envelope estimate will be incredibly difficult, according to one person familiar with the damage assessment efforts.

The government officials charged with surveying the damage — including those from FEMA, the Defense Department and the Centers for Disease Control and Prevention — each have to come up with their own funding estimates. But many of the damage assessment teams are still working on recovery in states like Texas and Florida.

By SARAH FERRIS and JENNIFER SCHOLTES

Heather Caygle contributed to this report.