WHY CLIMATE SCIENTISTS ARE TAKING FACT-CHECKING INTO THEIR OWN HANDS... 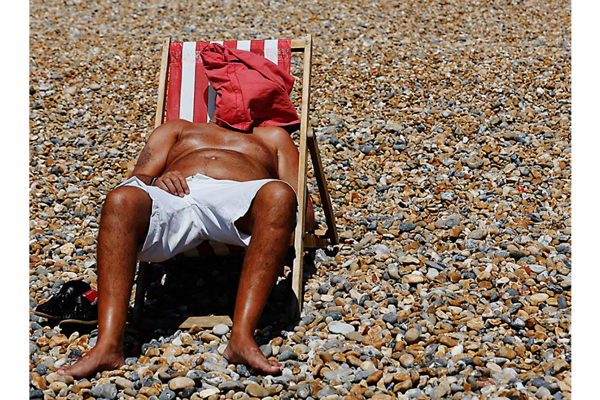 A man sunbathes under a t-shirt on Brighton beach, Southern England July 19, 2013. Climate scientists are attempting to debunk a series of media reports that suggest record-high global average temperatures are unrelated to climate change.
Luke MacGregor/Reuters

Climate scientists and science writers debunked news reports in The Daily Mail and Breitbart News that suggested global temperature increases were unrelated to climate change, one of a number of challenges aimed at a Republican Congress and Trump administration...

Scientists are challenging a series of news reports last week that suggest record-high temperatures are the result of the weather phenomenon El Niño, not climate change.

Researchers, science writers, and bloggers have slammed the media report since it first appeared in the British Tabloid The Daily Mail on Sunday. They have said the report – which was then summarized and widely circulated by the conservative news and opinion website Breitbart on Wednesday – cherry-picked data and drew incorrect conclusions.

The scientific community’s efforts to debunk the report are part of a developing trend, as President-elect Donald Trump prepares to take office in January. Climate change was already a highly politicized subject before Mr. Trump’s victory on Nov. 8, with climate scientists having a tense relationship with some members of Congress skeptical of humanity’s impact on global weather patterns. But Trump’s suggestions that climate change is a “hoax” and his promises to scale back on research and efforts to reduce greenhouse gas emissions has many in the scientific community facing off against these and related assertions.

Karen James, an independent researcher in Maine, told The Boston Globe she challenged on Facebook The Daily Mail report because she is concerned Trump’s win marks a change in society that it is no longer valuable to examine the truth and make evidence-based decisions.

Are you scientifically literate? Take our quiz

“Science doesn’t just produce facts and technologies and things that are useful. It’s also a way of thinking that values the truth,” said Dr. James, a biologist at Mount Desert Island Biological Laboratory in Bar Harbor.

Federal and international agencies including NASA, the National Oceanic and Atmospheric Administration (NOAA), and the World Meteorological Organization have said 2016 will likely be the hottest year on record, continuing a two-year trend.

But the report written by The Daily Mail’s David Rose says El Niño, not climate change, is responsible for this past year’s record-high temperatures. Mr. Rose also cites a recent decline in global average temperatures on land since the El Niño event ended this year, ushering in a cooler La Niña cycle.

Breitbart News’s James Delingpole then summarized the report in an article titled “Global Temperatures Plunge. Icy Silence from Climate Alarmists.” The Twitter account of the House Committee on Science, Space, and Technology shared the Breitbart article, prompting a deluge of angry responses from Democratic politicians and climate scientists, including Peter Gleick, co-founder and chief scientist of the independent research institute, The Pacific Institute.

Climate scientists across the blogosphere criticized The Daily Mail and Breitbart reports for cherrypicking data to draw targeted conclusions. Phil Plait, author of Slate’s “Bad Astronomy” blog, was one of many writers to point out Rose used only measurements on land. Temperature, they write, fluctuates much more on land than in the oceans because land stores relatively little heat.

“You can have both climate change and a goose from El Niño,” he said.

Other climate scientists pointed out the 2016 El Niño event was the hottest on record, in part, because global average temperatures have already increased over the time.

On the “Open Mind” blog, the pseudonymous Tamino also criticized Rose for citing temperature fluctuations only since 1998, and excluding the long-term trend of temperature increases since the 1970s.

The cacophony of voices that attempted to debunk The Daily Mail and Breitbart reports also highlighted climate scientists complicated relationship with some members of The House Committee on Science, which retweeted the Breitbart article. Some referenced Republican chair Rep. Lamar Smith of Texas and his criticism of the Obama administration. Mr. Smith has accused the Obama administration several times of having a “suspect climate agenda.”

“The United States’ contribution to the Paris climate agreement, which includes the Clean Power Plan, could cost up to $176 billion annually, and would have no significant impacts on climate change,” he said in a statement posted on the Committee’s website.

But other members have said the current environment of the committee is hostile to climate scientists. Rep. Katherine Clark, a Democrat from Massachusetts, told The Boston Globe scientists and witnesses are belittled, and they are sometimes handpicked to further a specific agenda.

Some in the scientific community are trying to improve this relationship between them and a Republican Congress and White House before Mr. Trump takes office. An open letter signed by 87 scientists and 22 Nobel winners hopes to convince Trump and the Republican Congress of the importance of accepting scientific evidence for climate change, as the Christian Science Monitor’s Weston Williams reported.

"Scientific knowledge has played a critical role in making the United States a powerful and prosperous nation and improving the health and well-being of Americans and people around the world," reads the letter. "From disease outbreaks to climate change to national security to technology innovation, people benefit when our nation’s policies are informed by science unfettered by inappropriate political or corporate influence."

The letter appeared to take aim at Trump and his transition team’s skepticism of climate change. Trump has called climate change “a hoax” orchestrated by the Chinese and pledged to revive the American coal industry, roll back carbon emission regulations, and withdraw from the Paris climate agreement. He also recently named Myron Ebell, who appears to relish criticism from the left of his climate views, to head his Environmental Protection Agency transition team.

While Trump appeared to soften this stance in an interview with The New York Times in November (he said there is “some connectivity” between humans and climate change), his space policy adviser wants to refocus NASA’s attention away from Earth and towards space.

“Earth-centric science is better placed at other agencies where it is their prime mission,” Trump adviser Bob Walker recently told The Guardian.

That remark led to calls among the scientific community that agencies including NOAA couldn’t shoulder the budgetary or satellite requirements for these research activities.

But Trump and a Republican Congress wouldn’t be the first in Washington and abroad to have a tense relationship with climate scientists. Both the Harper government in Canada and the Abbott administration in Australia challenged and defunded climate research. Even former President George W. Bush refocused NASA’s role in Earth sciences, as the Monitor’s Joseph Dussault reported.

“But at that time, climate change hadn’t yet been politicized to the degree it is now. And space-based Earth monitoring was a nonpartisan cornerstone in the national strategy,” writes Dussault.