WHY HURRICANE IRMA COULD HURT, A LOT: MUCH LIES IN HARM’S WAY... 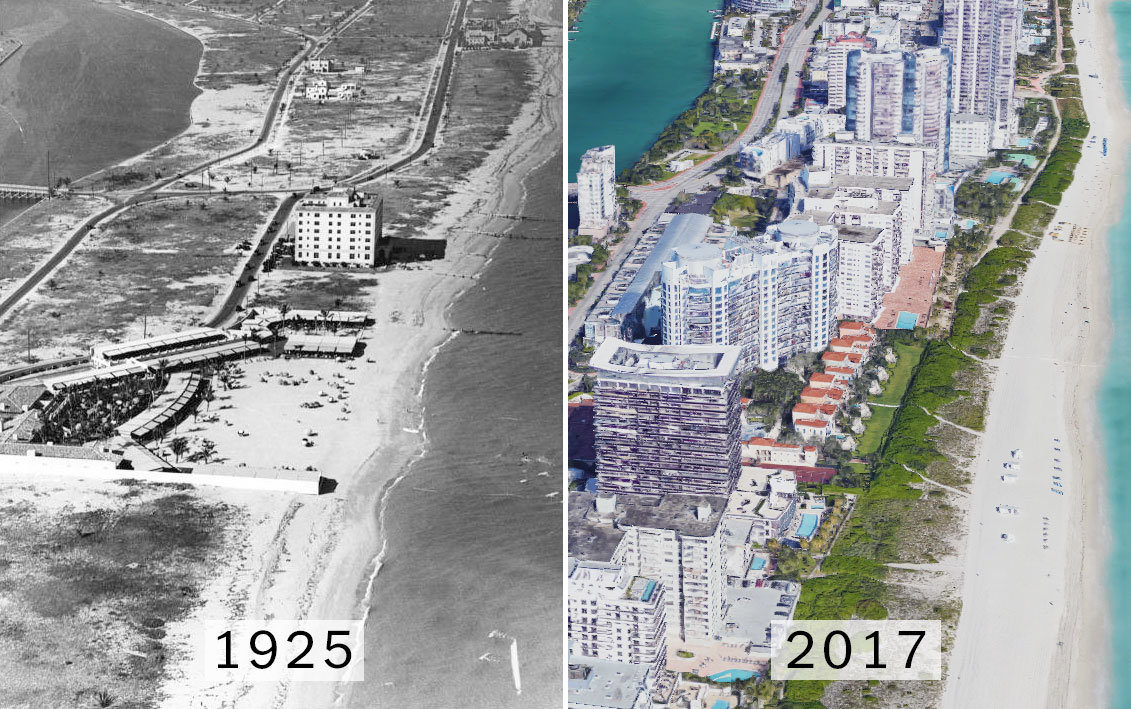 Miami Beach a year before the Category 4 storm of 1926, and this year. The reinsurance firm Swiss Re estimates that a similar storm would inflict more than $200 billion in damage if it hit Miami today. Credit Left, via State Archives of Florida; right, Google

WASHINGTON — The last time a Category 5 hurricane ripped through Florida, it was so destructive that meteorologists retired its name forever. That storm, Hurricane Andrew, made landfall southwest of Miami in 1992, killing 65 people, destroying 63,000 homes and inflicting $26.5 billion in economic losses...

But if a similar-sized hurricane were to strike Florida today in the same spot, it would be far more catastrophic — causing up to $100 billion in damage, according to a recent analysis by Swiss Re, the reinsurance firm. That’s even after accounting for the fact that South Florida has strengthened its building codes since Andrew.

The reason is simple: Central and South Florida have grown at a breathtaking pace since 1990, adding more than 6 million people. Glittering high-rises and condominiums keep sprouting up along Miami Beach and other coastal areas. A lot more valuable property now sits in harm’s way.

With Hurricane Irma — currently a Category 5 storm and one of the strongest hurricanes ever recorded in the Atlantic — possibly set to pummel Florida this weekend, the state is confronting the fact that rapid development has made its coastline far more vulnerable to hurricane damage than it used to be.

“Florida has exploded in the last 40 years,” said Megan Linkin, a natural hazards expert at Swiss Re. “If you look at images of Miami Beach from 1926” — when the Great Miami Hurricane, a Category 4 storm, devastated the city with a direct hit — “it’s almost unrecognizable today.”

Why Hurricanes Keep Getting Costlier

A similar dynamic is playing out across the United States, from Florida to Louisiana to Texas. In 2016, the Congressional Budget Office estimated that hurricanes currently cause about $28 billion, on average, in annual damage nationwide. But those costs are projected to rise 40 percent between now and 2075, after adjusting for inflation.

Nearly half of that projected increase, the C.B.O. said, is because global warming and sea-level rise are expected to make hurricanes and storm surges more severe, though the exact effects are still a source of debate among scientists.

The Cost of Hurricane Harvey: Only One Recent Storm Comes Close (click to open graphic) 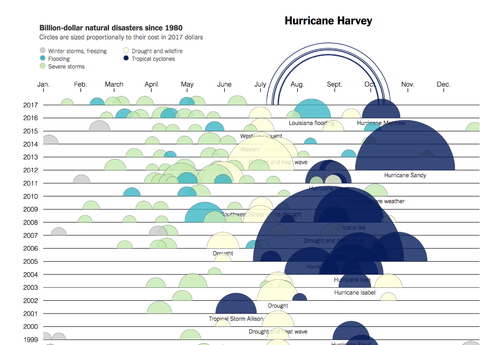 But half of the expected rise in hurricane costs is the result of expected increases in coastal development. Today, according to the C.B.O., roughly 1.2 million Americans live in coastal areas at risk of “substantial damage” from hurricanes — defined as damage of at least 5 percent of average income. By 2075, that number is forecast to rise to 10 million.

Population growth can also increase hurricane risks by adding newcomers who are unfamiliar with big storms or by clogging roads during evacuations, experts said. 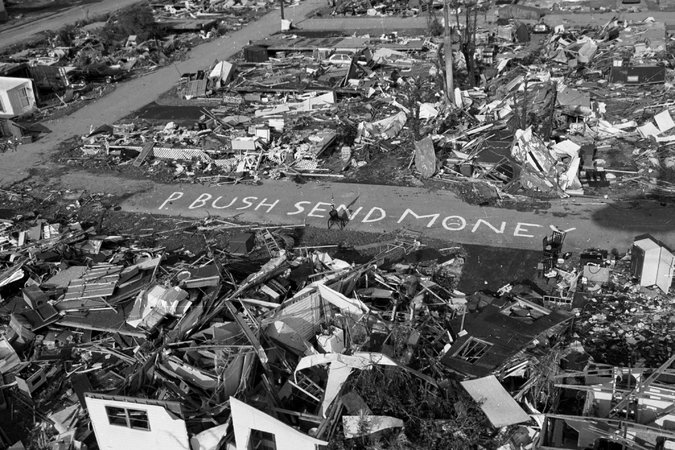 Devastation from Hurricane Andrew at a trailer park near Homestead, Fla., in 1994, more than two years after the storm struck. Credit Keith Meyers/The New York Times

As of Wednesday, forecasters were still unsure where Irma might make landfall in Florida or how strong it will be when it does. But in almost any conceivable scenario, a hurricane today is likely to do more damage than a comparable storm in the past, if only because of increased development.

In 1960, Hurricane Donna raged through the Florida Keys as a Category 4 storm before turning northwest to hit Naples and Fort Myers, causing roughly $7.4 billion in damage in today’s dollars. According to a model developed by Roger A. Pielke, Jr., and Christopher Landsea, a similar storm today would cause $46 billion in damage, after accounting for population growth, and increased property values.

Swiss Re estimates that a storm like the Great Miami Hurricane of 1926 would inflict more than $200 billion in damage today if it struck Miami and Miami Beach directly — exceeding the $160 billion in damage caused by Hurricane Katrina in 2005, adjusted for inflation. (Officials are still calculating the cost of Hurricane Harvey to Texas, but estimates today range as high as $180 billion.)

Nearly $80 billion of those potential losses in Florida would not be covered by insurance, the Swiss Re report said, which would “undoubtedly” affect South Florida’s economic growth “over several years, hindering its capability to recover.”

Those stark numbers, Mr. Pielke said, suggest that even before considering the effects of climate change, “more $100 billion disasters are probably in our future — and we need to think harder about how to prepare for them.” 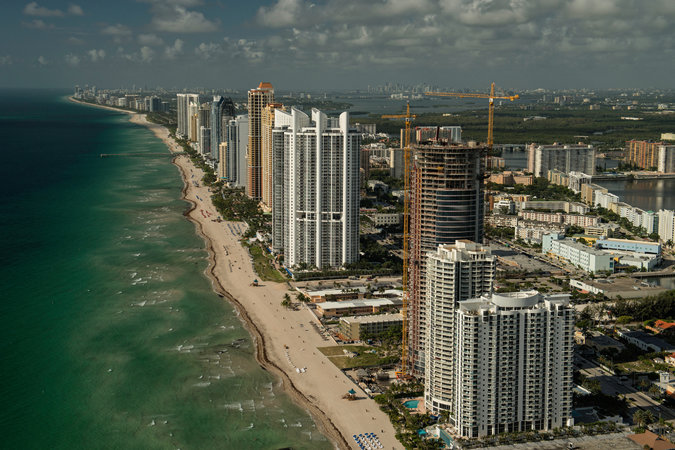 Construction sites in Sunny Isles, Fla., on a barrier island in northeast Miami-Dade County, in 2015. Credit Oscar Hidalgo for The New York Times

In response, some cities like Miami have been taking precautions against future storms — though so far that has not included a slowdown in development.

In 1994, in the wake of Andrew, South Florida enacted some of the strictest building codes in the country. New houses must now feature impact-resistant windows or shutters as well as stronger clips and straps to secure their roofs, to better withstand major hurricanes, which inflict much of their damage through powerful winds that can send debris flying dangerously. Local zoning rules also require high-rise developers in key areas to build to withstand high winds.

“There’s no question that these building codes have improved our hurricane risk,” said Shahid Hamid, director of the Laboratory for Insurance, Financial and Economic Research at Florida International University, which has built a wind machine that can simulate hurricane-force winds to test new building designs.

But, Dr. Hamid cautioned, stricter codes don’t offer perfect protection. Roughly 70 percent of the region’s buildings were built before 1994, and many homes have not been retrofitted (though homeowners can get a substantial cut in their insurance premiums if they do so). And, he said, a direct hit from a Category 5 hurricane, with sustained wind speeds greater than 157 miles per hour, can cause heavy damage to even the best-constructed homes.

What’s more, even high-rises built to withstand fierce winds can still be vulnerable to water damage from heavy rains that can seep in through roofs, as investigators discovered after Hurricane Wilma clobbered the region in 2005. 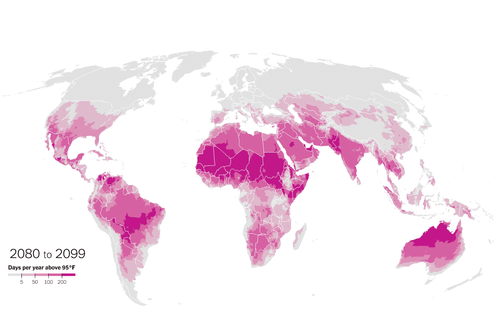 There is also flooding and storm surge to consider. Hurricane Andrew pushed relatively little water inland in 1992 and did most of its damage through ferocious winds that flipped over cars and pulverized homes. But sea levels along Miami’s coasts have risen 3.3 inches since then, and the city is already seeing an increase in “sunny-day flooding” during high tides. With sea levels higher, a hurricane that struck in a vulnerable place could conceivably produce far greater flooding than Andrew did.

“Every hurricane is different,” said Jean-Pierre Bardet, dean of the college of engineering at the University of Miami. “I’d expect that if we had a direct hit, we’d see damages that we were not expecting.”

While stricter building requirements have made the cost of development somewhat more expensive, they have hardly put a brake on South Florida’s frenetic growth, as millions of people move for the sunny weather and gorgeous beaches. Miami-Dade County’s population has grown 35 percent since Hurricane Andrew, and developers still have ample incentive to build along the coastline.

In Florida, which has no state income tax, property taxes make up 36 percent of state and local revenues, and few cities have opted to take drastic measures to limit development along the hugely desirable coasts.

“It’s a struggle that every community is facing in South Florida,” Mr. Bardet said. “There is a constant battle between our ability to prepare for hurricanes and the pressure for urban expansion. It’s a great place to live. But it does come with some risk.”