WHY MORE COVERAGE OF FLOODS IN TEXAS THAN IN SOUTH ASIA? 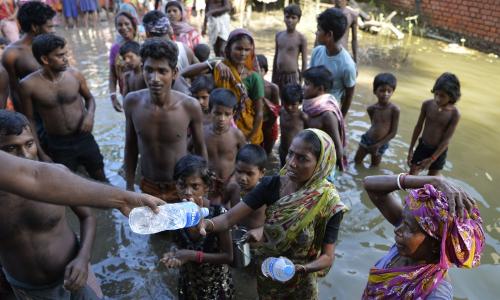 Are American lives simply worth more?

Lynne Edwards, Peter Williams, and Susan Howe ask the above question... Plus letters from Bob Pike and Sheila Rigby

While I have the greatest sympathy for those who have lost friends, family, pets or property in the Texas floods (Report, 30 August), I am disgusted at the relative number of column inches and amounts of airtime devoted to its coverage. During precisely the same period huge areas of Bangladesh, Nepal and India are suffering an even greater catastrophe, with 1,200 plus lives lost and millions made homeless. Let’s get some balance here. America is a rich country and will cope, despite inept leadership. Or are we saying that American lives are worth more?.
Susan Howe
Ross on Wye, Herefordshire

• The contrast between the coverage of floods in Texas and floods in South Asia is stark. Live updating of trivia as well as important events from Houston; the odd report from India, Nepal, Bangladesh and elsewhere. There are probably many more people of South Asian heritage in this country than American. The implicit message is that they, and their relatives, are far less important than a pet in Houston. I don’t want Texas coverage reduced, but please take more notice of the rest of the world.
Lynne Edwards
New Quay, Ceredigion

• The probability of these extreme weather events has increased as a result of global warming. Focusing on America might have been justified if Donald Trump had used his visit to Texas to announce the US’s return to the Paris climate accord. In the absence such good news, can we assume that the UK media values an American life at 80 times that of an Asian one?
Peter Williams
Heaton Moor, Stockport

• “Houston, Texas, after being deluged by over 76cm (30 inches) of rain”; “By yesterday the region had been hit by up to 9tn US gallons of rainfall – as much in two days as it normally receives in a year and the equivalent of a cube of water two miles high” (Report, 29 August). The services in Houston and your reporters struggle to give ordinary understanding to the volume of water involved. Metrication can assist. One millimetre of rain is one litre of water on every square metre of ground. 76cm of rain is 760 litres (or if we wish to mix larger imperial volumes, 150 gallons) of water on every square metre of ground. Now I understand why the elderly ladies were submerging gracefully in the lounge of their retirement home.
Bob Pike
St Cyr sur Loire, France

• The third letter was amended on 31 August 2017. The letter writer meant to pose the question “can we assume that the UK media values an American life at 80 times that of an Asian one?”. This was based on 15 deaths in America, and 1,200 in Asia; a mistake in the calculation meant “eight times” was originally submitted.