WHY THE EPA NOMINEE WANTS TO BE A POLITICAL WRECKING BALL... 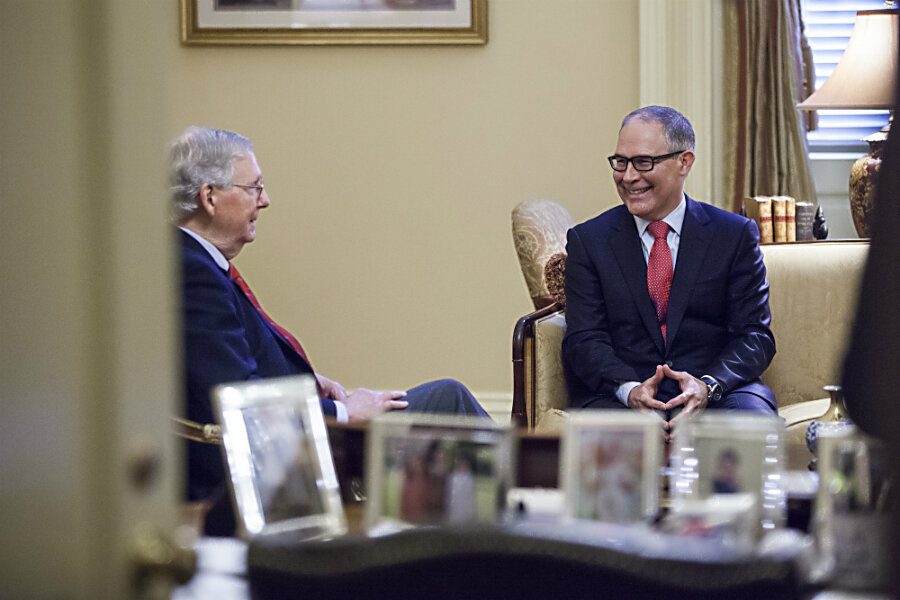 Scott Pruitt has made a career of asserting states' rights against federal authority, primarily by suing the agency he may run. Now, he gets a chance to shift that balance...

When new presidents come to the White House, the pendulum of federal environmental action tends to swing, and under Donald Trump it may take an unusually wide shift – seen especially in passing responsibility to the states.

State empowerment stands out like no other theme as a guiding light for Scott Pruitt, who faces a confirmation hearing today as President-elect Trump’s nominee to head the Environmental Protection Agency.

Mr. Pruitt’s strict interpretation of the United States Constitution, and of the limits of federal authority, undergirds his track record of challenging major EPA regulations as unconstitutional power grabs, while serving as Oklahoma’s attorney general.

But his critics say those lawsuits – including a still-pending case on electricity emissions, President Obama's signature domestic climate policy – pose a grave risk to joint state-federal efforts to safeguard the environment and public health. They say Americans have benefited from a model of “cooperative federalism” that has taken root, with states and the EPA each playing important roles. And they note that, whatever Pruitt’s ideology may be, important money for his political campaigns has come from the oil and gas industry.

Even as environmentalists urge the Senate to block Pruitt, the pendulum swing isn’t driven by him alone. From Trump on down, the incoming administration is steeped in the view that the Obama EPA has overreached, and that a reset is in order. But to allies and outside observers alike, Pruitt is potentially a major change agent.

“He is deeply committed to federalism in a proper sense of this word,” said David Rivkin, a constitutional litigator at BakerHostetler who represented Pruitt and Oklahoma on their lawsuit against the EPA's power sector emissions rule. “It’s something that very much animates his thinking. I think what a lot of people don't understand is a lot of the lawsuits he brought are driven entirely by his constitutional views.”

The political swings on the environment have become sharper in recent years on both left and right, said David Konisky, associate professor at the Indiana University School of Public and Environmental Affairs. Under Obama, it meant a more domineering federal government. Under Trump, the EPA will likely use its discretion to pull back on enforcement and oversight. That opens up the likelihood of more lapses of regulatory oversight, such as the lead poisoning water crisis that occurred in Flint, Mich., he said.

At issue now is the future of cooperative federalism, that notion of a collaborative model for the Constitutional roles of federal and state governments. While the framework applies to each agency a bit differently, the balance between state and federal control is particularly sensitive to leadership change at the EPA.

The basic way cooperative federalism works at EPA has been this: The federal agency sets standards, maintains broad oversight, and provides things like scientific research on pollutants and on how reducing pollution would work in the real world. States, meanwhile, implement and enforce their own plans to reach the EPA standard.

States already are awarded significant deference in carrying out environmental regulation, said Professor Konisky. That’s partly how a situation like Flint occurred even under Obama’s EPA. The state environmental agency downplayed or didn’t take the problem seriously enough, and told the regional EPA office to stand down. While EPA later admitted it acted too late, Konisky said the authority states have over the EPA in those situations complicated the matter.

When the Obama administration shifted toward a model with greater federal power, after Republican President Bush, “states viewed this as an infringement on their discretion,” Konisky said. “I think the [Obama] EPA sees this as a necessary correction on their inaction.”

Pruitt could shift more environmental planning and enforcement to states. To liberals, it heralds less federal oversight that could enable states to flout regulations they don’t like. To conservatives, this means less EPA micromanaging in state plans for reducing air and water pollution.

Pruitt, at a recent event, voiced support for the general idea of cooperative federalism.

What Democrats, environmental activists, and social justice groups fear is that Mr. Pruitt’s EPA would relinquish the federal watchdog role over the states. They’re concerned state governments with close industry ties would exert political influence to weaken enforcement of environmental rules; indeed, they say that occurred with Pruitt in his role as Oklahoma's attorney general.

Sen. Ben Cardin (D) of Maryland said he worries that a Pruitt-led EPA won’t actively enforce regional efforts like cleaning up the Chesapeake Bay, where states are under an order to curb the release of harmful contaminants into the watershed. In fact, Pruitt signed an amicus brief opposing the Chesapeake Bay cleanup plan, backing a lawsuit that claimed the EPA was stepping on state power.

"In my state," Carper said, "the air pollution includes mercury, ozone and any number of toxic substances that are put up not in Delaware but in other states and it’s simply blown to our part of the country."

More than a mere rebalancing may be under way, Democrats and environmental groups say. They worry a combination of pressures will undercut the environmental protection process.

They say Republicans have threatened the impartiality of the science advisory panels that underpin environmental standards through legislation that would pack the panels with industry representatives.

Supporters of those efforts say it’s a necessary move because those panels aren’t allowed to consider the cost of health standards, so it makes sense to include officials from the business world – and perhaps more from state agencies – who have to live with those changes. (The other side notes that the EPA assesses costs when designing regulations after setting a standard.)

The EPA’s scientific, systems design and engineering work could also come under pressure from the REINS Act, passed by the House earlier this month, which would require Congress to approve regulations that cost the economy $100 million. Proponents of the bill say it’s a necessary check on a process that fails to account for real-world economic effects, while detractors say it would undermine science-based conclusions that back environmental and public health standards.

Then there’s funding for the EPA. It has remained relatively flat for a decade, straining resources at federal offices around the country. Some state environmental regulators complain that’s crimped their implementation and enforcement efforts, as much of their work comes through grants and revolving funds.

“There’s the budget issue going on and also the states’ willingness to take a hard line against the polluters,” said Nat Mund, legislative director with the Southern Environmental Law Center. “There are fewer and fewer environmental cops out there down the line.”

Republicans have a different view. Sen. Deb Fischer of Nebraska said agencies in her state are best equipped to handle regulation of things like storage tanks on farms.

A slew of new or stricter regulations and the requisite planning, combined with an EPA that misses regulatory deadlines, has complicated state agencies’ roles, Yeatman said. The amount of times the Obama administration imposed a federal plan on states for reducing air pollution demonstrates the problem, in his view. That so-called federal implementation plan is used when states submit a plan that doesn’t sufficiently meet an air quality standard – and the Obama EPA used that tool 56 times compared with the previous three presidents using it a combined 5 times.

“The Clean Air Act stipulates that the states are supposed to be first among equals,” Yeatman said. “Demonstrably, that’s the way it has not worked over the last eight years. What we’ve seen is this shift from cooperative federalism to coercive federalism.”

Pruitt is of the same mindset, and is committed to enforcing environmental laws if they’re followed to the letter, said Mr. Rivkin, who served at the Department of Justice and the White House Counsel's Office in the administrations of Ronald Reagan and George H. W. Bush.

A key test will likely be the same issue – greenhouse gas regulation – that is at stake in Pruitt’s highest-profile (and still pending) lawsuit by states against the EPA. Rivkin has served as outside counsel in that suit.

Many conservatives don’t believe an EPA rule limiting carbon emissions from power plants is legal. The EPA, asserting a court-backed obligation to regulate carbon emissions as pollutants under the Clean Air Act, has called on states to cut electric power emissions sharply over the next 15 years.

Obama’s legacy on climate action now hinges at partly on the next pendulum swing at EPA.

Staff Writer | @zcolman
Zack Colman, deputy editor (Washington), was a Knight Science Journalism fellow at MIT, a Bill Lane Center for the American West media fellow at Stanford University and has covered energy and environment policy from Washington, D.C., for the Washington Examiner, The Hill and Smart Grid Today. A Michigan State University alum from the Detroit area who earned a master's in public affairs reporting from the University of Illinois at Springfield, his reporting also has appeared in The Associated Press, InsideClimate News, Fusion, Wired Magazine, High Country News and TheAtlantic.com.
source: http://www.csmonitor.com/
original story HERE
If you would like to share this blog story on Facebook with one easy click, scroll down to the very bottom of this page and look for the SHARE button along with the Facebook LIKE button under the "Sign up to Learn About & Help End Global Warming” boxed area where people enter their email address. You do not need to enter any email address to use the one click Facebook SHARE button.
Get more of The Global Warming Blog. Bookmark this page and signup for the blog’s free RSS Feed. Sign up for free Global Warming Blog by clicking here. You will automatically be emailed a regular summary of the latest global warming headlines.
To learn about more about global warming, climate change or greenhouse gases as well as the causes, consequences, solutions, definitions, facts and tipping points related to these subjects, click here.
To see our most current positions, opinions, comments, agreement or disagreement with this article, and/or possible criticisms related to the subjects or facts raised in the above article, click here.  Then look for those subjects in the navigation links at the top the page.
To sign a critical petition for declaring an international global warming State of Emergency, click  here!