Why the Movie Downsizing Should be Seen by Everyone Who Cares About the Environment?

Alexander Payne the writer and producer of Downsizing, as well as Matt Damon and the other stars, deserve the highest environmental honors. It is obvious they took a lot of professional risks in making this clever film about the dangers of global warming. 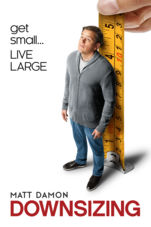 Every environmentalist and sustainability advocate should see this film! What may be the single greatest truth of this film is that it has cleverly brought one of the 11 key tipping points of global warming to the forefront of the world's consciousness. That tipping point is methane release from the melting permafrost and tundra.

In this movie, there are many clever plays on the downsizing of human beings to downsize their consumption and resource overshoot. While it was not an initial box office hit, we at Job One for Humanity believe that over the years this movie will do very well in the streaming services and at other video rental outlets. Downsizing was chosen by the National Board of Review as one of the top ten films of 2017, while Hong Chau a co-star earned a nomination for Best Supporting Actress at the 75th Golden Globe Awards.

For those of you who want more information on this movie the following is from its Wikipedia page and, it does not give away a very clever ending and telling of the methane tipping point surprise.

Downsizing is a 2017 American science fiction comedy-drama film directed by Alexander Payne, written by Payne and Jim Taylor and starring Matt Damon, Christoph Waltz, Hong Chau, and Kristen Wiig. It tells the story of a couple who decide to undertake a newly-invented procedure to shrink their bodies so they can start a new life in an experimental community. When the wife refuses the procedure at the last minute, the husband has to reassess his life and choices after befriending an impoverished activist.

Here is the movie trailer.