WHY THE REPUBLICAN PARTY'S CLIMATE POLICY OBSTRUCTION IS INDEFENSIBLE... 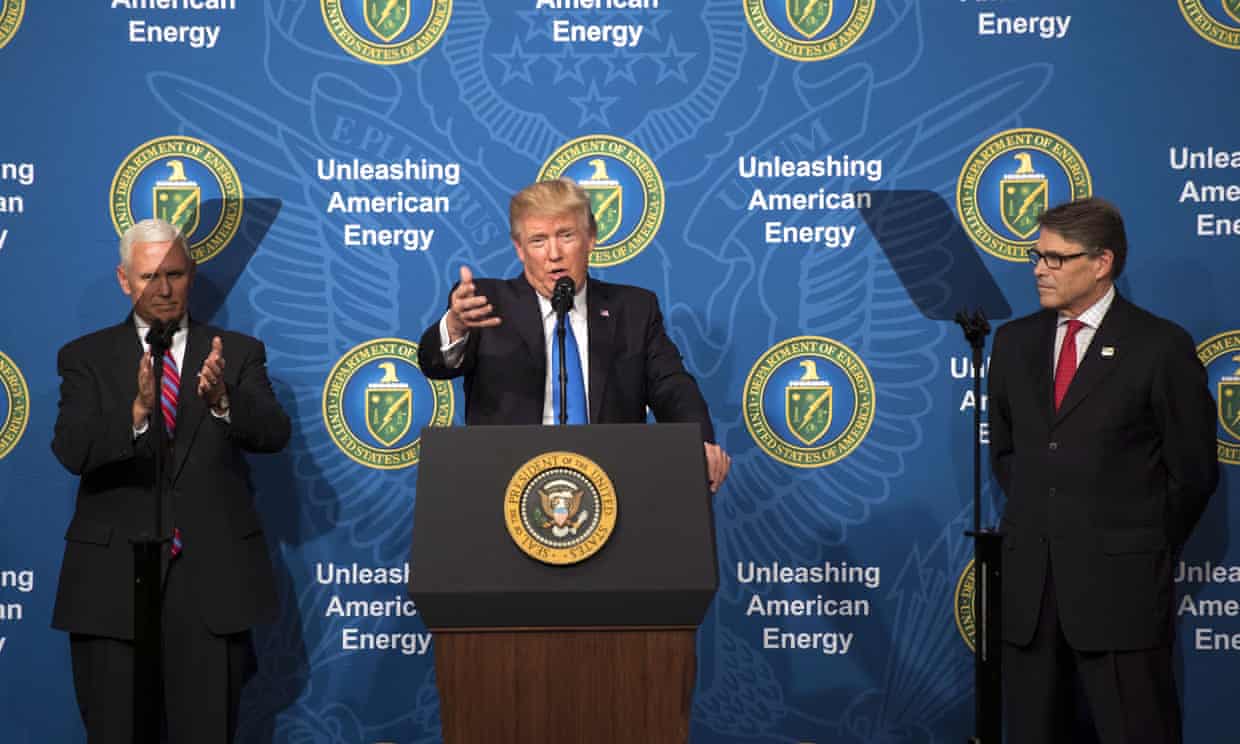 It’s unscientific, fails basic risk management, is bad for the economy, and immoral...

Perry’s responses perfectly summarized the Republican Party’s current position on the subject. The problem is that it’s an indefensible position.

Wrong on the science

The Republican position is based upon a rejection of established climate science. When confronted with the conclusion that global warming is 100% due to human activities, Perry responded, “I don’t believe that ... don’t buy it.” But of course it’s not a matter of belief – that’s what the scientific evidence indicates. There have been dozens of studies quantifying the various contributions to recent global warming. I summarized ten of them in the chart below (details here), and the answer is clear: 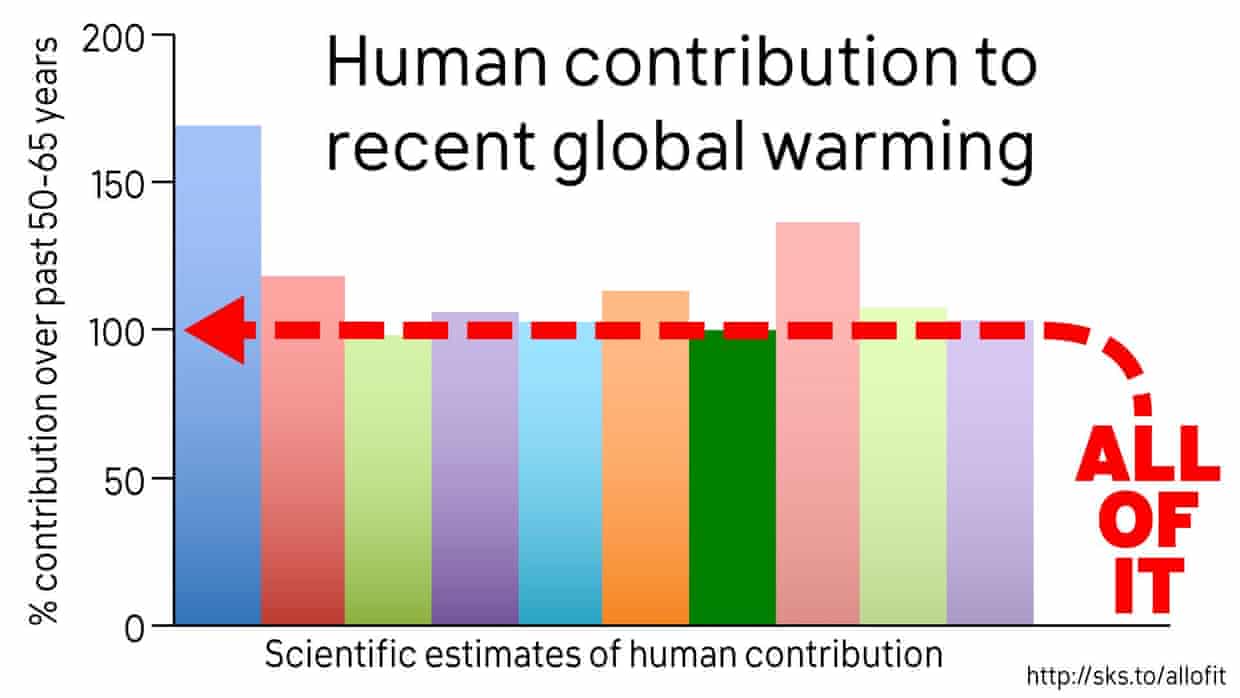 Human contribution to global surface warming over the past 50 to 65 years based on ten peer-reviewed studies (see sks.to/allofit for details). Illustration: Dana Nuccitelli and John Cook

That’s why the latest IPCC report likewise included a best estimate that humans are responsible for all of the global warming since 1950. During that time, solar activity has slightly declined, and there haven’t been any significant natural warming factors. Perry talked about “the warming and cooling of our ocean waters,” but the oceans have likewise steadily absorbed heat due to human-caused global warming.

On this issue there’s a 97% expert consensus whether you survey climate scientists or their public statements or their peer-reviewed literature. And the greater the climate science expertise of those surveyed, the higher the consensus.

Many Republican policymakers will now admit, like Perry, that humans have “some impact” on the climate. That simply represents an acceptance of 150-year-old science. They don’t deserve much credit for finally accepting science that was first established when John Quincy Adams was president.

There’s a chance the less than 3% fringe minority of contrarian climate scientists are right. It’s a slim chance, given that their research doesn’t withstand scientific scrutiny, is full of errors, and their alternative explanations are all contradictory, but it’s not impossible.

But that’s like saying there’s a chance that if I chain smoke cigarettes for 50 years I won’t develop lung cancer. Or that I’ll never get in a car accident, or that my home will never be broken into or catch fire. Those are all possibilities, but people generally don’t like to take big risks with our health, or important purchases like cars and homes without having an insurance policy.

With Earth’s climate, there is no insurance policy. Either it remains stable and habitable or it becomes increasingly unstable and uninhabitable. In that sense the smoking analogy is quite apt. The more we smoke, the more we increase our chances of developing cancer. The more carbon pollution we dump into the atmosphere, the more we increase the odds of destabilizing Earth’s climate. We can either take that risk, or we can cut down our smoking or carbon pollution to minimize it.

Currently, most Republican policymakers don’t want to take any action to curb America’s carbon pollution (with the exception of about 10% of House Republicans). Like Rick Perry, they will often cite concerns about economic impacts to justify climate policy opposition. That’s exactly backwards.

In reality, climate inaction is the expensive route, and climate polices could potentially save tens of trillions of dollars. That’s the conclusion not of some tree-hugging environmental group, but of Citibank – America’s third-largest bank. Citi Global Perspectives & Solutions published a report in 2015 finding that investment costs alone in a climate action scenario would be $2 trillion lower than in an inaction, fossil fuel investment scenario. In other words, even if the 97% consensus is wrong, investing as though it were correct would save money. And if the 97% consensus is right, Citi found that slowing global warming would save tens of trillions of dollars more.

It’s not just the Citibank report; there’s a 95% consensus among economists that the US government should commit to reducing greenhouse gas emissions. Only 1% of economists disagree. 41% of economists think climate change is already hurting the global economy, 63% think it will by 2025, 89% by 2050, and 97% by 2100.

Wrong on ethics and morality

Sadly, today’s wealthy policymakers won’t feel the impacts of their climate policy obstruction. Today’s youth, and especially people in poorer countries who are least responsible for the problem will most suffer the consequences.

America is the world’s biggest net carbon polluter, one of the world’s wealthiest countries, and has joined Syria and Nicaragua as the only countries rejecting the Paris climate agreement. Nicaragua objected that the agreement was too weak, and Syria was mired in a civil war. Essentially, Trump and the Republican Party stand alone in rejecting the need for climate action, despite the country’s responsibility for the problem and resources available to address it. We’re forcing the rest of the world to clean up our dangerous mess. It’s a grossly immoral and unethical position.

The Republican Party position is indefensible

There’s simply no way to defend the Republican Party’s climate policy obstruction. The scientific evidence is clear, which is why there’s a 97% expert consensus. It’s possible (however unlikely) that those scientific experts are wrong, but risking the stability of the climate on which every living organism on Earth relies on such a long shot is a terrible failure of basic risk management.

Moreover, doing so would badly hurt the economy. There are climate policies that would grow the economy, that have bipartisan support and have been proposed by Republican thought leaders. Every other world country agrees on the need for climate action, and yet most Republican Party leaders are unwilling to even engage in the climate policy debate.

These are the reasons why the Republican Party stands alone in climate denial. They will eventually pay the political price for this indefensible, immoral stance, much as they lost huge segments of the American electorate due to party positions on civil rights and gay marriage. The problem is that we only have about three years left to avoid dangerous climate change. Time is running out.