WHY WON’T AMERICAN BUSINESS PUSH FOR ACTION ON CLIMATE? 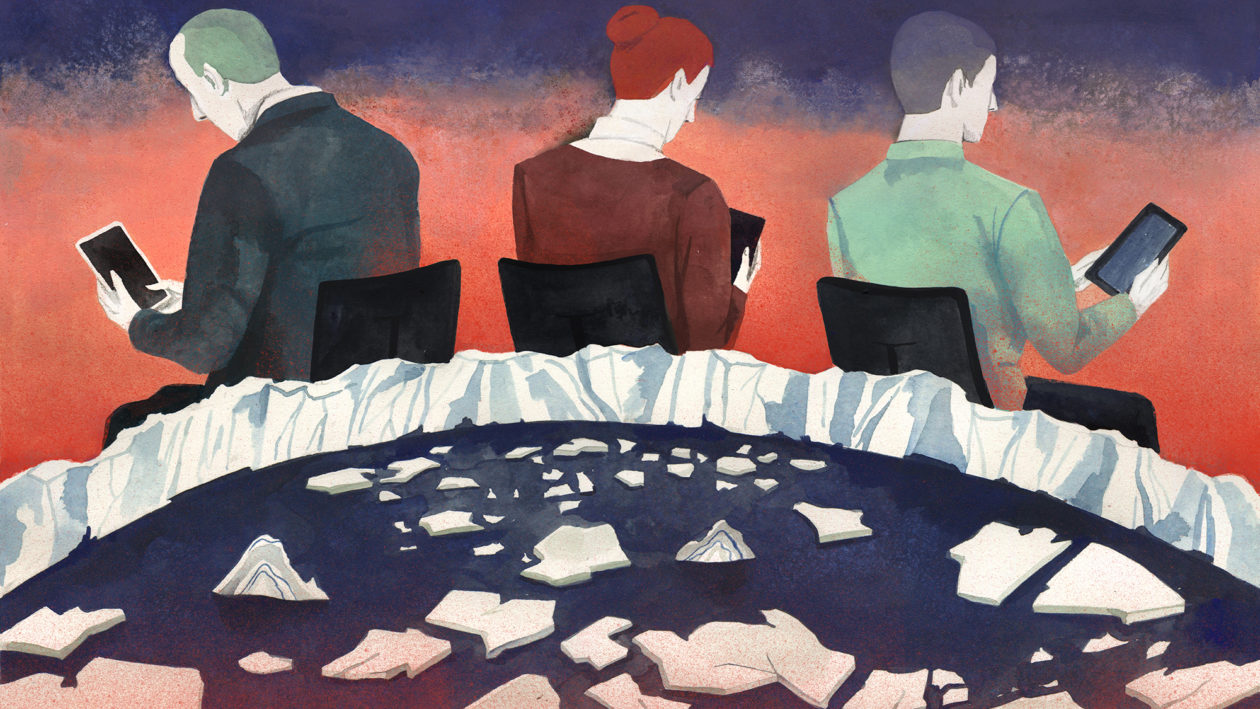 Many U.S. corporations have adopted environmentally friendly practices and touted themselves as green companies. But when it comes to government climate policy, these businesses have been largely silent and support politicians who oppose taking any action...

hen President Trump imposed restrictions on immigrants and refugees, dozens of technology companies, including Apple, Facebook, Google, and Microsoft, filed a legal brief opposing the new rules. CEOs at Ford, Goldman Sachs, Nike, and Starbucks spoke out against them.

When Indiana and North Carolina curbed anti-discrimination protections for lesbian, gay, bisexual, and transgender people, leaders of big companies strongly objected. PayPal canceled plans to expand in North Carolina, and the NBA moved its all-star game out of Charlotte.

But as President Trump prepares to back away from the Paris climate agreement, roll back the Obama administration’s signature climate change initiatives, and appoint an Environmental Protection Agency administrator who has repeatedly fought the agency, the leaders of corporate America have for the most part been muted or silent.

This poses a problem for environmentalists and their allies in Congress, particularly on the climate issue.

U.S. Senator Sheldon Whitehouse, a Rhode Island Democrat and a persistent advocate for climate change action, puts it this way: “One of the dirty secrets that we have to live with is that even the good-guy corporations don’t show up in Congress to lobby for doing something about climate change. Collectively, they do zero or less than zero to support climate legislation… That leaves the field to the bad guys.”

Without support from business, the environmental movement will struggle to defend itself against what David Goldston, director of government affairs for the Natural Resources Defense Council, calls an “incredible onslaught from both Congress and the administration.” What’s more, if environmentalists are to have any chance of convincing the federal government to enact stronger laws or regulations to curb climate change — a long shot, admittedly, for now — they will need big companies to use their political clout to turn around the Republicans who control Congress and the White House.

The reluctance of Fortune 500 companies to speak up on behalf of environmental protection is striking because it comes after decades of efforts by environmental nonprofits, ranging from The Nature Conservancy to Greenpeace, to develop partnerships with business. This work has paid off: Many companies have pledged to reduce their own carbon footprints, curb waste, and buy renewable energy. But few are willing to spend political capital on behalf of the environment.

Why aren’t companies “speaking out more against the Trump administration’s ‘alternative facts’ on climate?”

The nomination of Oklahoma Attorney General Scott Pruitt to lead the EPA is a case in point. “He’s not just bad on one thing,” says Fred Krupp, president of the business-friendly Environmental Defense Fund (EDF). “He’s bad on everything.” It’s the first time that EDF has campaigned against an EPA nominee, but the group has few business allies in the battle.

Tom Murray, an EDF vice president who works closely with business, says he hopes that “pragmatic business voices” will eventually step up to influence the Trump administration. “At this point, however, companies are hanging back on engaging in policy and politics,” he says. “Companies are trying to make sense of the new political landscape, concerned about becoming the president’s next social media target, and enticed by the potential of regulatory and tax reform.”

A business affiliate of the Natural Resources Defense Council called E2 (it stands for “environmental entrepreneurs”) did put together a letter from “500 business leaders” who oppose Pruitt, but the signatories include a registered nurse, a physical therapist, and not a single big-company CEO.

Bob Keefe, E2’s executive director, says big business needs to step up. “It simply makes no sense that big companies like Coke, Microsoft, Google, and other companies that care about and are doing great things with clean energy and sustainability aren’t speaking out more against the Trump administration’s ‘alternative facts’ on climate change and a national energy plan that will only increase our dependence on fossil fuels,” he says.

Worse, at least for environmentalists, some companies are actively turning against their erstwhile allies. Two days after Trump was elected, the Alliance of American Automobile Manufacturers, which represents Ford and General Motors, among others, urged the president’s transition team to roll back stringent fuel economy rules that were agreed to by the carmakers early in the Obama years. Environmentalists were stunned.

Says Mindy Lubber, president of Ceres, a nonprofit alliance of environmentalists and investors: “General Motors is doing a lot of good things on waste, they’re committed to 100 percent renewables, they’re supportive of the Paris talks. But on fuel economy standards, they like this new administration.”

In 2016, Amazon, Facebook, Microsoft, and Google all donated more money to Republicans than Democrats.

Meantime, as the political winds have shifted rightwards, so have campaign contributions from corporate political action committees (PACs). In 2016, Amazon, Microsoft, Facebook, and Google — all of which had previously favored Democratic congressional candidates over Republicans — donated more money to Republicans than Democrats. Congressional Republicans have united to oppose plans to regulate the greenhouse gases that cause climate change since 2008.

All of this means that, when it comes to climate change, the loudest business voices in Washington belong to the fossil fuel industry and powerful trade associations, notably the U.S. Chamber of Commerce and the National Association of Manufacturers, that have staunchly opposed climate regulation. The chamber’s board includes executives from Accenture, Allstate Insurance, AT&T, Caterpillar, Dow Chemical, FedEx, Florida Power & Light, and Pfizer, all of which have pledged to reduce their own greenhouse gas emissions. Public pension funds and so-called socially responsible investors have called on chamber members to “address any misalignment between their own positions and actions on climate change and their funding of the chamber’s actions,” to little apparent effect.

To be sure, some big companies have backed up their climate change rhetoric with action in Washington. In 2009, Apple left the U.S. chamber over its climate change position and Nike resigned from the chamber board, citing the climate issue. Last year, Google, Amazon, Apple, and Microsoft filed a legal brief in federal court supporting the EPA’s Clean Power Plan. General Mills, Mars, and Starbucks have lobbied side-by-side with Ceres on climate issues.

Since the election, Ceres, World Wildlife Fund, and a group called We Mean Business recruited a large number of small companies and a small number of large ones — Campbell Soup, DuPont, Gap, General Mills, HP, Intel, Kellogg, Johnson & Johnson, Mars, Mondelez, Monsanto, Staples, Starbucks, and Unilever, among them — to sign a letter asking the new administration to affirm its commitment to the Paris climate agreement. Yet without further action at the state or federal level, the U.S. will probably fall short of meeting the carbon pollution target that it agreed to in Paris, experts say.

Companies contacted by Yale Environment 360 declined to discuss their Washington lobbying, campaign contributions, or trade association memberships. In a statement, Google explained its donations to Republican climate skeptics by saying: “Google engages on a wide variety of public policy issues and we work with policymakers and advocacy groups across the political spectrum. We’re never going to agree 100% with every organization or policymaker on every issue.”

Corporations do not want to become a target of a president who is willing to call out individual companies by name.

Gary Garfield, who recently retired as CEO of Bridgestone Tire, is one chief executive who did step up, wrangling senior executives in the tire industry to call for strong climate action. But he says environmental issues aren’t a priority for many CEOs because, unlike immigration or gay rights, they do not directly affect company employees. CEOs don’t want to unnecessarily aggravate political allies, shareholders, or employees over an issue that “doesn’t really directly affect their business,” he notes.

The Trump presidency complicates the calculus for businesses that need to manage an array of Washington issues, insiders say. “Companies absolutely care about climate change, but they care about other things too,” says Ceres’ Lubber. “They are balancing and juggling.” Corporations want Trump and the Republican Congress to support corporate tax cuts and infrastructure spending, and they do not want to become a target of a president who has been willing to call out individual companies by name.

“Companies see a bully in the schoolyard, and they are off in the corner, doing their homework, and hoping the bully picks on someone else,” says Aron Cramer, the president and CEO of BSR, a network of businesses dedicated to sustainability. But, he says, business leaders understand the importance of climate policy, and they will speak up: “The underlying fundamentals will cause business to sustain their climate commitments and ultimately to be more vocal about those commitments.”

As with all things climate-related, there isn’t a lot of time to waste...

Marc Gunther has reported on business and sustainability for Fortune, The Guardian, and GreenBiz. He now writes about foundations, nonprofits, and global development on his blog, Nonprofit Chronicles.