WHY WORLD'S CLIMATE RESPONSE 'WILL BE WON OR LOST IN CITIES'... 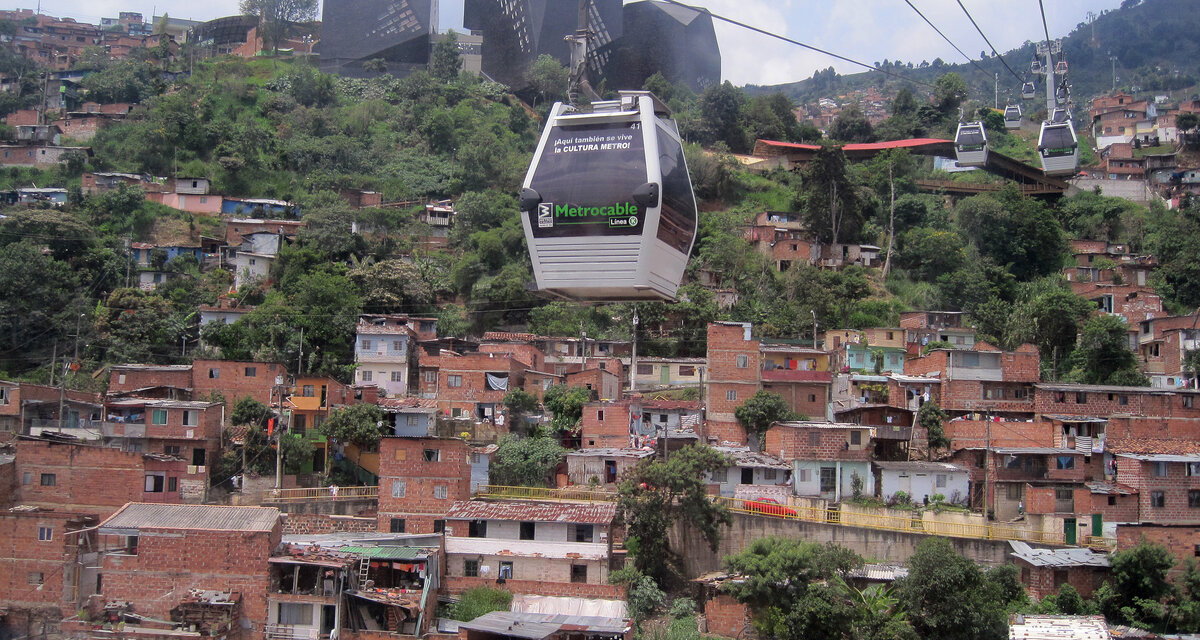 A Metrocable to transport residents of hillside slums is one project that has helped transform the city of in Medellin, Colombia. A core goal for the UN's Habitat III conference in Ecuador this week is for the world's cities to improve the environment together with improving lives of impoverished residents. Sara Miller Llana/The Christian Science Monitor/File

In Quito, Ecuador, a UN conference on cities reveals global momentum to seek lower-carbon urban living patterns. But blending emission cuts with economic growth is a daunting challenge, especially in the Global South...

October 17, 2016 —The last time the United Nations held a global conference on behalf of the world’s cities, back in 1996, one environmental issue was conspicuously not emphasized in the resulting vision document: There was no call for concerted action to mitigate global warming. “Climate change” was mentioned only once, as something that “can” happen when humans use fossil fuels.

This week in Ecuador, as an anticipated 45,000 people gather for a sequel, things are playing out on a very different track.

Heading into the meeting known as Habitat III, participating nations have prepared a document reflecting the urgent belief that cities will be ground zero for mitigating and adapting to climate change. While the document itself is light on short-term implementation methods, experts hope the adoption of the document this week will be a launching pad in the battle for sustainable development  that the UN has declared “will be won or lost in cities."

“It’s been a very exciting time for cities in the last 10 years because cities as a source of solutions has been recognized,” said Ani Dasgupta, global director of the World Resources Institute Ross Center for Sustainable Cities, in a conference call with reporters. “There is momentum for the global community to come together and do things, and I think Habitat this time will be different from the past two Habitats."

Indeed, recent months have seen a procession of landmark international agreements on climate and the planet’s fragile future. Last December nearly 200 countries signed onto the landmark Paris Agreement pledging to reduce their carbon dioxide emissions. That's been followed by a framework to address international air-travel emissions (albeit weaker than many hoped for), and global commitments this past weekend for slashing the use of hydrofluorocarbons – powerful greenhouse gases – as refrigerants.

Beyond that, in the past two years the UN's Millennium Development Goals have evolved into “Sustainable Development Goals” to be achieved in the next 15 years, thus integrating environmental needs with the fight against global poverty.

But if the world's response to climate change is growing, so are its cities – particularly in the Global South. Between 1950 and 2050 the world’s urban population is projected to increase from under one-third to about two-thirds of the total population, with 52 and 21 percent of that population living in Asia and Africa respectively.

With more than half the human population already living in cities, urban areas are now disproportionately responsible for the planet’s emissions. While they cover less than 2 percent of the Earth’s surface, they consume 78 percent of its energy and produce 60 percent of its CO2 emissions.

The task: move from goals to action

So if all the climate pledges being made now are to produce actual results, urbanists say, cities will have to drive and display those changes. Potentially, what helps Earth's ecosystems can also make city life cleaner and more comfortable for their booming and often-impoverished residents.

But this is why some urbanists are so worried about the vagueness in the headline document of Habitat III: the New Urban Agenda.

Although the Agenda is binding – unlike the declarations of past Habitat conferences – critics are frustrated that it didn’t include more specifics on how people living in cities are supposed to make these changes happen, instead leaving those practical details to be grappled with at the conference itself and beyond.

The NUA never once mentions “mayors,” for example, which critics say illustrates a fundamental disconnect pervading the road map – between the countries that are signing on to the goals and the communities that will be at the crux of implementation.

“There are no targets they have to achieve in there,” she says. “It could have been much more basic … and then had some implementation [guidelines]. It just seems like the whole thing was a bit haphazard.”

What is lost from that – adds David Satterthwaite, a senior fellow at the the International Institute for Environment and Development in London, in an email to the Monitor – is “the commitments that urban (municipal, city, metropolitan) governments should be making and where.”

“I hope [for] a strong commitment on the part of all groups gathered at [Habitat III] to strengthen the local processes that are needed to deliver on the commitments and help fund them,” he continued.

There is evidence that these processes are already under way in some cities.

In 1994 the city of Surat, India, experienced a flood that triggered a major plague outbreak. In the aftermath, city officials launched aggressive cleanup operations and longer-term governance reforms. The city expanded garbage collection and access to sanitation throughout the city and paved roads in the city’s slums. The city also improved data-gathering and monitoring on water quality and public health. Historically prone to flooding, the city is now investing in climate resiliency and adaptation infrastructure. The post-plague response has brought Surat “to the forefront of urban management in India, and the city is known for its state-of-the-art infrastructure,” according to an analysis last year.

Meanwhile Medellín, in Colombia, went from the “murder capital of the world” in the 1990s to the “world’s most innovative city” in 2013 through a variety of initiatives improving access to housing, upgrading transportation, and reforming land use. The city focused on improving its poorest communities, diverting more revenue from the sales of its abundant hydroelectric power to fund various improvements and partnering with the business community to build parks, provide basic services, and expand the cable car system into the city’s poorest communities.

The task of the third Habitat conference, experts say, will be to connect these isolated efforts around the world and build a global dialogue around how to implement the NUAs goals.

“It’s important to figure out how implementation is going to happen,” said Ana Moreno, secretariat coordinator for Habitat III, in a conference call with reporters.

This is only the third time the conference has taken place in 60 years, and urbanists are hoping this conference will lead to more concrete results than the previous two. The Vancouver conference in 1976 proclaimed that inequitable and unsustainable urbanization will get worse “unless positive and concrete action is taken at national and international levels.” The Habitat II conference 20 years later in Istanbul resulted in a declaration hailing “a new era of cooperation” and a Habitat Agenda calling for “adequate shelter for all” and “sustainable human settlements.”

Twenty years on from Istanbul, organizers in Quito are hoping that a more focused and urgent message will lead to more widespread dialogue, cooperation and, ultimately, progress.

“Previous Habitats were more generally about human settlements. This is focused on urbanization,” said Ms. Moreno. “This not an excluding conversation, it’s a focusing conversation on big challenges humanity is facing.”

Lessons from cities like Surat and Medellín – specifically, focusing on delivering basic services to everyone in a city – could be a start, added Mr. Dasgupta in another conference call.

“This idea of actually getting services to everyone as a path towards growth and environmental sustainability is a departure from what we’ve traditionally believed in,” he said.

“Cities don’t change overnight, so their decisions over roads, over land use, that they make today will impact them over [decades],” he added. “Quito [needs to] be the beginning of the conversation and not end of the conversation.”