WILDFIRE SEASON IS SCORCHING THE WEST... 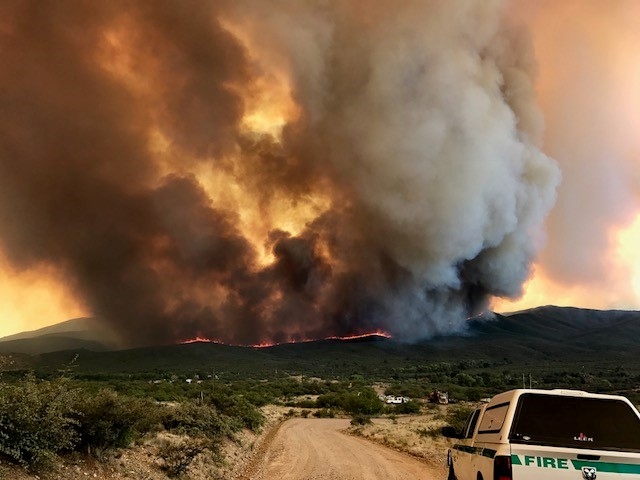 Smoke rises from the Goodwin Fire, which burned more than 28,000 acres in Arizona through mid-July.
Credit: Prescott National Forest/flickr

The West is ablaze as the summer wildfire season has gotten off to an intense start. More than 37,000 fires have burned more than 5.2 million acres nationally since the beginning of the year, with 47 large fires burning across nine states as of Friday...

The relatively early activity is quickly becoming the norm, with rising temperatures making the fire season longer than it used to be. The warming fueled by greenhouse gases is also helping to create more and larger fires as it dries out more vegetation that acts as fuel for fires.

This new fire situation means that western states need to be begin to rethink how they prepare for and combat fires, as well as how fire-prone land is developed.

Five large fires (those of 1,000 acres or more) are currently raging across California, the largest of which is the Detwiler fire near Yosemite National Park, which has burned more than 80,000 acres since it ignited on July 16. That fire is now 75 percent contained, but it destroyed dozens of buildings, including 63 homes.

Montana currently has the most large fires of any state, with 14, including the massive Lodgepole Complex fire (a series of smaller fires that merged into one), which has burned more than 270,000 acres in the eastern portion of the state. That fire is also well-contained, but has burned through tens of thousands of acres of rangeland, displacing thousands of cattle and burning several structures. An intense drought there has rapidly cured the grasses that have fueled the fires.

Oregon has seven large fires burning, while Nevada has six and Idaho five.

Scorching temperatures and dry conditions in recent weeks have helped fuel these fires across the region, which have burned 2 million more acres than at this point in last year’s wildfire season.

Compared to the 10-year average of wildfire activity, this year is below average for the number of fires, but above average for the total number of acres burned. A very active wildfire season in the Central Plains pushed up the acres burned; a wet winter meant grasslands were ripe with fuel, and once hot and dry weather came and fires ignited, they could take off more quickly than fires that burn through forested areas, Robin Broyles, a spokesperson for the National Interagency Fire Center, said.

A 2016 Climate Central analysis showed that the annual number of large fires has tripled since the 1970s and that the amount of land they burn is six times higher than it was four decades ago. 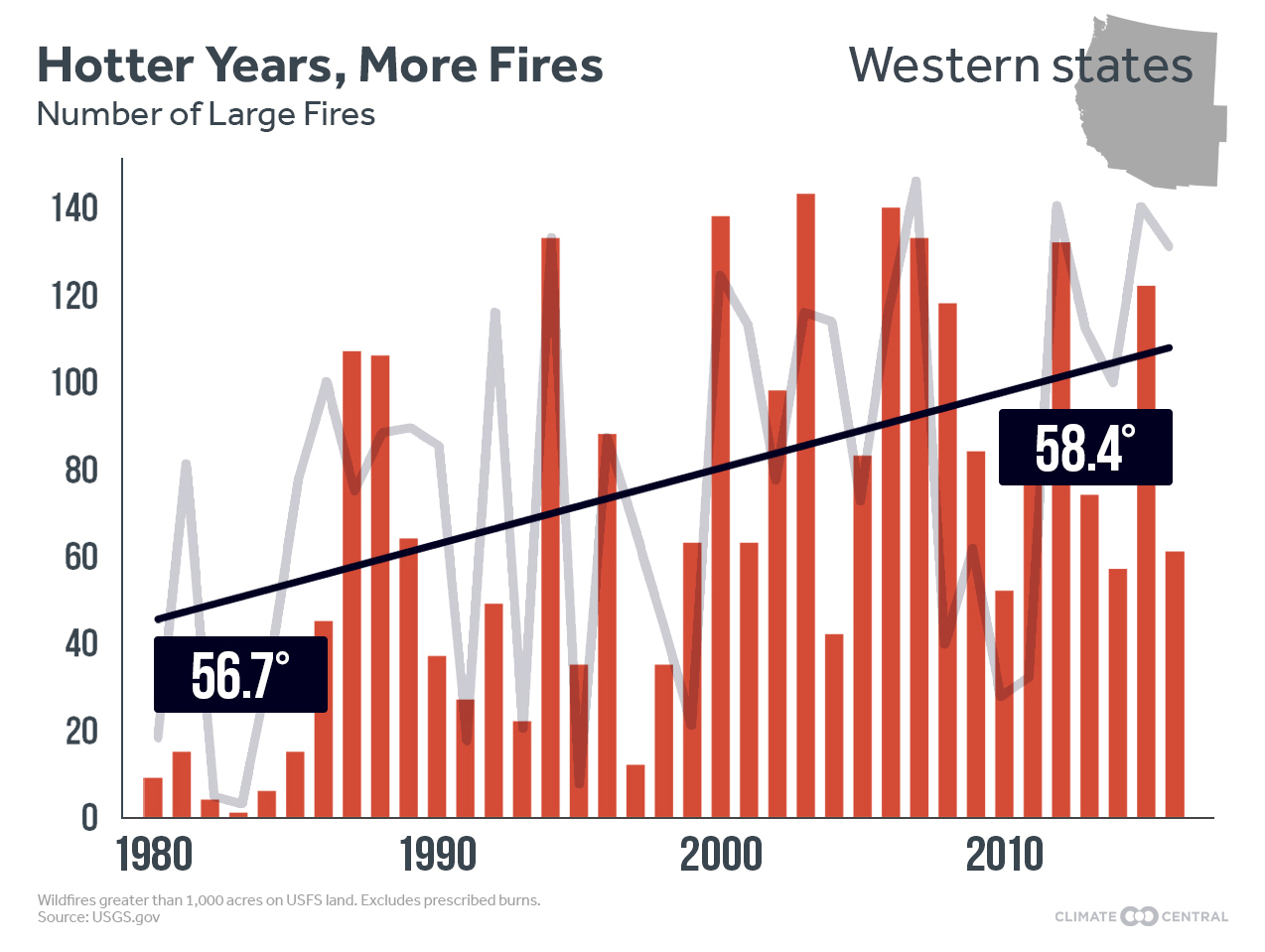 Number of wildfires in these states

While multiple factors, including land use and tree disease, influence fire activity, climate change is playing a role in those trends. A study published in October found that rising temperatures accounted for nearly half of the increase in acres burned, as they helped to dry out forests and extend the length of the fire season.

The fire season is 105 days longer than it was in the 1970s, the Climate Central analysis found.

The lengthening of the fire season has become clear in California, which usually didn’t see major fires until the Santa Ana winds kicked in in the fall and vegetation had dried out over several months.

With those hot periods likely coming earlier and earlier in spring and summer as global temperatures continue to rise, “you’re going to have a longer period where fire can ignite and move,” Stephens said. 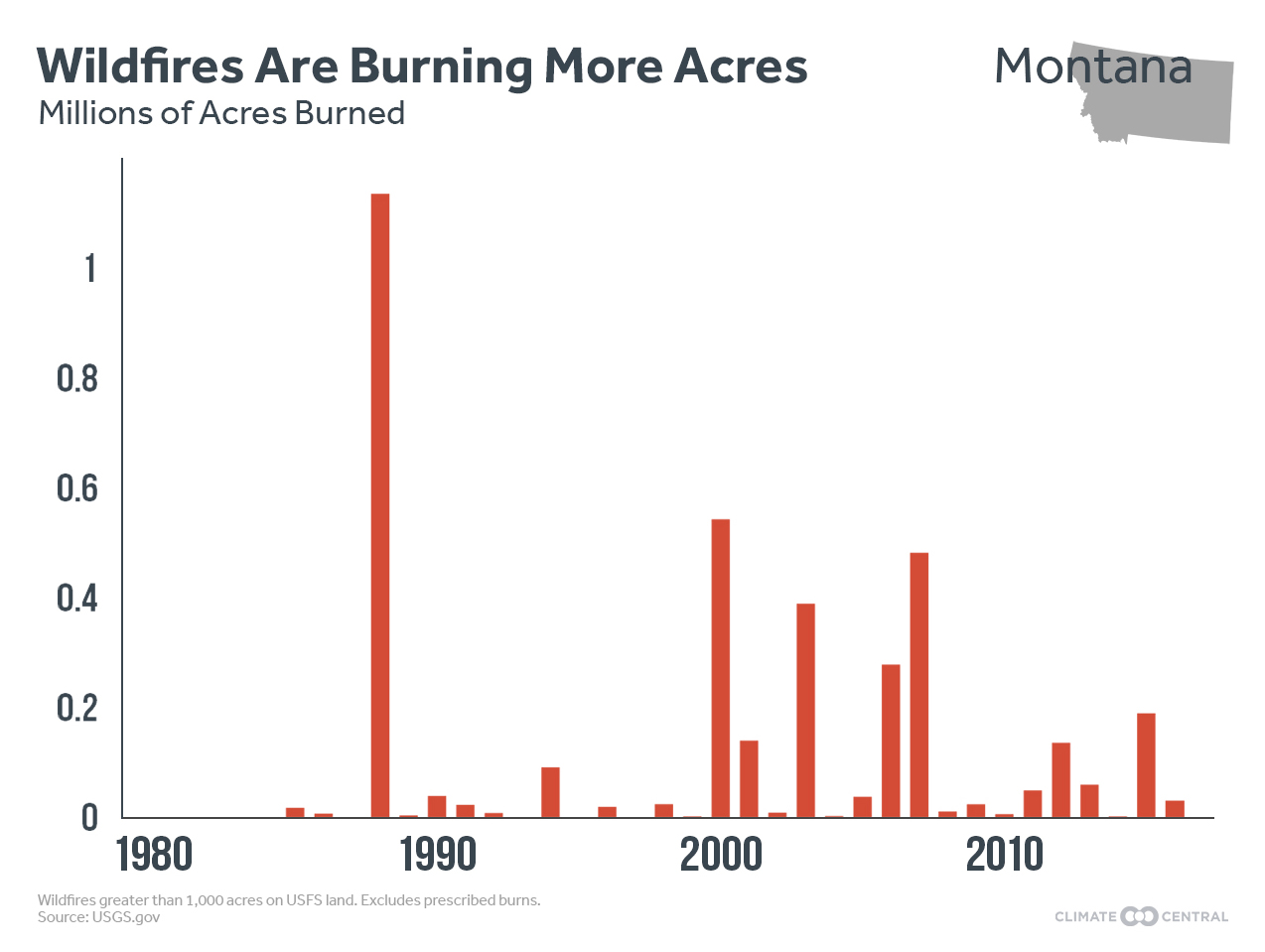 Acres burned by wildfires in these states

While the past few years in California have seen wildfires fueled by the record-setting drought in the state that killed off swaths of trees, this fire season has been helped by the opposite conditions. Ample winter rains allowed grasslands to flourish, so when hot, dry conditions came in June, those grasses were quickly cured into perfect fire fuel, Stephens said.

With the shifts in the fire season, policymakers and fire managers may have to begin to rethink some of their strategies for preventing fires, particularly as the longer fire season eats into the time that managers have to conduct prescribed burns to burn up potential fuel, Stephens said. Areas may also have to do more prescribed burns during drought years, to reduce fuel loads, he said.

Funding for firefighting — the costs of which have topped $1 billion in 12 of the past 15 years — may also have to be rethought. Instead of having a seasonal firefighting team, funding may have to be put in place for a year-round one, Stephens said.

Hot and dry conditions are expected to persist across the West over the next few days, which could help more fires start and spread. Areas in the path of next month’s solar eclipse, particularly drought-plagued Montana, are also concerned about the influx of eclipse watchers who may not be aware of the fire danger or the precautions they’ll need to take in order to avoid accidentally setting one.

“It’s really important that people recognize” that danger and are aware of the various fire restrictions in place, Broyles said.

You May Also Like:
VW, in Settlement, to Build Electric Vehicle Stations
The Largest Wind Farm in the U.S. Is Growing in Oklahoma. It’s a Sign of the Times
Climate Change Means More Fuel for Toxic Algae Blooms
Stop What You’re Doing and Look at This Gorgeous Larsen C Satellite Image