WILL AUSTRALIA'S RETREAT FROM CLIMATE CHANGE RESEARCH BE A GLOBAL TREND? 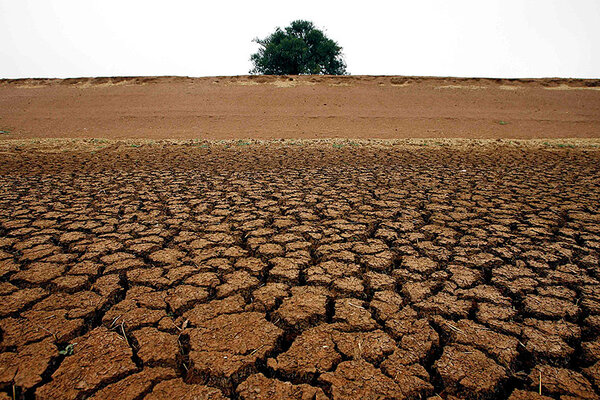 Cracks are seen in a dried-up dam near the western New South Wales town of Parkes, located over 400 kilometres west of Sydney March 7, 2007. Australia's longest river has lost half its natural water and it is predicted to dry up by a further 20 percent due to climate change by 2030. David Gray/Reuters/File

The Australian federal science agency responsible for climate change research is shifting its focus, asserting that climate change is proven and so needs no more research. Does this make sense, and is it a sign of things to come?

The move, based on the belief that climate change is proven and so requires no further research, represents a shift in Australian government policy. Going forward, the country will instead focus on climate change mitigation, adaptation, and commercial ventures.

While the international scientific community has reacted with almost universal dismay to the announcement by Australia’s Commonwealth Scientific and Industrial Research Organisation (CSIRO), a fundamental question remains: does this represent the start of a broader shift, or is Australia an outlier?

“I believe this is the start of a global trend,” says David Carlson, director of the World Climate Research Program (WCRP), Geneva, in a telephone interview with The Christian Science Monitor.

“Because of Paris [United Nations Conference on Climate Change, 2015], people will begin to relax their guard. The worry is that Australia is just the first.”

The WCRP is a part of the United Nations and, as such, rarely comments on the activities of particular countries. But this situation is very unusual, an “extraordinary event," says Mr. Carlson.

“My steering committee really lit up about this on Friday. We know so many of the [affected] scientists personally.”

In fact, the WCRP released a statement Monday expressing its concern, outlining the new goals as expressed by CSIRO, in areas such as “biodiversity and sustainability of agriculture, soils, and water” and “science to keep (our) people healthier," going on to say:

“One can hardly imagine a worse and more backward step toward any of those laudable goals than ignoring climate and discarding climate research.”

In an email to staff February 3, CSIRO chief executive Larry Marshall wrote, "the question [of climate change] has been answered, and the new question is what do we do about it, and how can we find solutions for the climate we will be living with," as the Monitor reported.

The notion that climate change is proven and so needs no further research is “absurd," says Carlson. “I wish that were true!”

“I completely agree we need to adapt, but without continuing research, we won’t understand how.”

Australia’s climate change research is of particular value, and so any reduction of particular concern, because CSIRO is “the most advanced institution of its kind in the Southern Hemisphere,” as The Independent notes.

“The organization creates one of the only high resolution pictures of the Southern Hemisphere’s climate – and the models that data is used in are among the most important for studying how climate change will affect the world.”

Not only is Australia so important for the global understanding of climate change, positioned as it is in a key location, but it is also especially vulnerable, surrounded by vast oceans with such major processes.

“I can understand the political impulse for relaxation,” concludes Carlson, “but I think that’s dangerous for the planet because we don’t have the information we need.”