A boat plies a waterway in Vietnam’s Mekong Delta. Photo by LisArt/Flickr

No delta region in the world is more threatened by climate change. Will Vietnam act in time to save it?

This is the first article of an in-depth, four-part series exploring threats facing the Mekong Delta and how they might be addressed. Read the second installment here.

It’s a sad fact that several decades of talk about climate change have hardly anywhere yet led to serious efforts to adapt to phenomena that are virtually unavoidable. Neuroscientists say that’s because we’re humans. We aren’t wired to respond to large, complex, slow-moving threats. Our instinctive response is apathy, not action.

That paradox was much on my mind during a recent visit back to Vietnam’s fabulously fertile Mekong Delta, a soggy plain the size of Switzerland. Here the livelihood of 20 percent of Vietnam’s 92 million people is gravely threatened by climate change and by a manmade catastrophe, the seemingly unstoppable damming of the upper reaches of the Mekong River.

Samuel Johnson famously said that “nothing concentrates the mind so well as the prospect of imminent hanging.” It’s been nine years since a World Bank study singled out the Mekong Delta as one of the places on our planet that is most gravely threatened by sea level rise. There if anywhere, I imagined, I’d find a sense of urgency. I’d find adaptive measures well advanced.

I was wrong. Vietnamese government ministries, provincial administrations, experts from Vietnamese universities and thinktanks, experts deployed by the World Bank, the Asian Development Bank and foreign governments: all have been pushing plans and policies. The problem has been to sort out the best ideas, make appropriate decisions and find the resources needed to implement them in a timely, coherent way.

Things may be coming together at last, I concluded after talking with dozens of local officials, professors, journalists and farmers in mid-June. None denied the reality of the problem. Many connected the question of what to do about climate change to older arguments over the best ways to grow more and better crops.

Some of my interlocutors expected that Vietnam’s new government will reveal its strategy toward the end of 2016. They hope Hanoi will get it right. Vietnam’s a single-party state. Once a policy is adopted and handed down from the top, it isn’t easy to change direction. However, if the prescriptions just don’t make sense in the 13 Delta provinces, the party/state’s local representatives can just fail to follow through. In Vietnam it’s common to find unmotivated officials carrying out Hanoi’s prescriptions in a formal way, without conviction and, at the end of the day, without much result.

Because the stakes are so high, let’s assume that there’s only one correct answer: that in the next several months, Hanoi will approve a comprehensive mitigation and adaptation plan for the 13 Delta provinces, and the provinces will like it enough to carry it out. Anything less would be a terrible result. 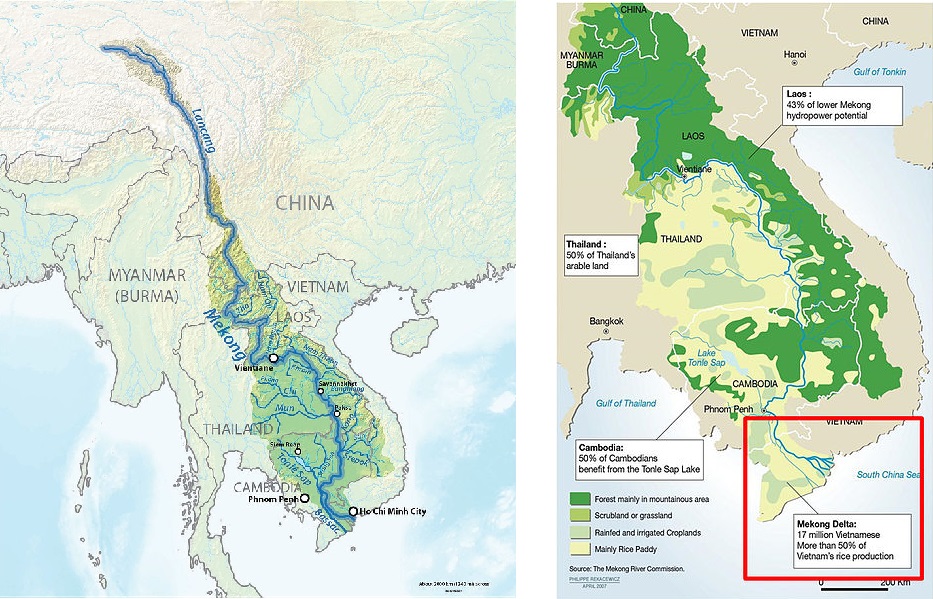 Left: The Mekong River and its watershed. The river originates in the Tibetan Plateau of China, where it is known as the Lancang River; it then proceeds through Myanmar, Thailand, Laos, Cambodia and Vietnam. Right: The lower Mekong basin. Images courtesy of Wikipedia and Penprapa Wut/Wikimedia Commons

The Mekong Delta’s average elevation is less than 2 meters above sea level. Much of it is perfectly suited to growing rice. Farmers in the Delta also produce fruit, coconuts, river fish and shrimp. Their abundant harvests are made possible by annual flooding and by an intricate network of canals, dams and sluices.

It’s a highly engineered environment, a modern hydraulic society based on intensive farming and infrastructure that deflects floods, limits saline intrusion, facilitates river transport and aquaculture, and furnishes the right amount of fresh water for irrigation.

It wasn’t always like this, of course. When Vietnamese settlers first moved into the Delta some 300 years ago, they found a wild landscape shaped by a monsoon climate, typhoons and tides and the Mekong’s annual flood. Imperial officials, and later French colonial engineers, mobilized tens of thousands of pioneers to dig canals and drainage ditches. As time passed, much of the infrastructural work was mechanized. Decades of insurgency slowed the taming of the Delta but even the years of the “American War” were marked by land reform and the introduction of so-called “miracle rice” — strains that could double harvests provided that irrigation water levels, pesticides and nutrients were carefully managed. 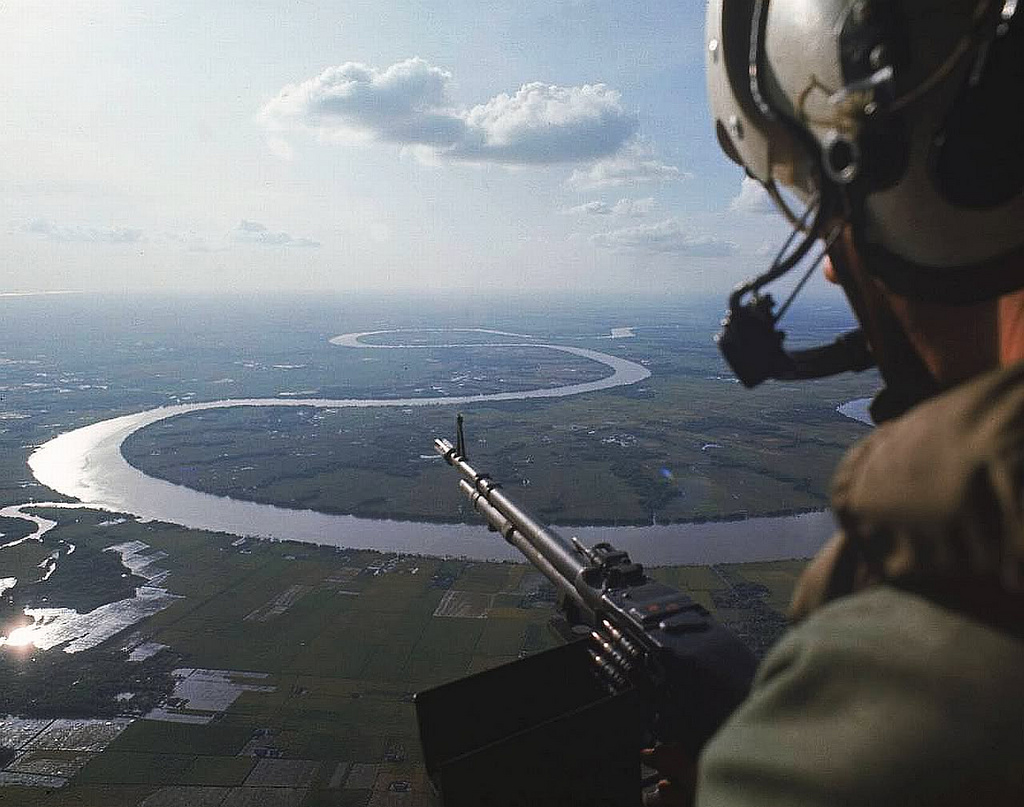 A heli door gunner over the Mekong Delta in 1967. Photo by manhhai/Flickr

The officials who came south after the collapse of the Saigon government in 1975 were intent on reforming agriculture Soviet style, as they’d done in the Red River Delta far to the north. Collectivization didn’t work very well, however. Farmers refused to tend collective plots with the same care they’d put into growing crops on their own land. Ten years later, Hanoi conceded the failure of central planning, redistributed agricultural land in family-sized plots and allowed small private businesses to operate alongside state-owned enterprises.

These so-called “doi moi” reforms ushered in a quarter century of astonishing growth in Vietnam’s economy. For the Mekong Delta, loans and grants from Western countries funded repair and extension of the water management infrastructure. The introduction of high-yielding rice varieties, expansion of rice lands and emphasis on double and, in some places, triple cropping permitted a rapid increase in rice production, from 7 million to 24 million tons of paddy annually. Vietnam’s integration into the global trading system opened up markets for its rice and for new crops — in particular pond-raised shrimp and catfish.

There were skeptics, of course, who spoke up to doubt the sustainability of unprecedented prosperity. Some academics questioned the wisdom of an unremitting focus on rice monoculture. They noted that in districts no longer subject to annual flooding, ever-increasing quantities of pesticides and chemical fertilizer are needed to sustain good harvests. Some farmers complained that the state-owned Vietnam Southern Food Corporation was getting an unfair share of profits from marketing the rice they grew. As the country’s food economy shifted from scarcity to surplus, Hanoi’s continued emphasis on “food security” — meaning, in the Delta, reserving more than half of its arable land exclusively for rice — seemed increasingly anachronistic.

Still, as food production and exports climbed year after year, it was possible to imagine that prosperity would be permanent in the Mekong Delta. It was only necessary to wish away the warnings of climate change researchers, the huge dams under construction upstream, and the persistently low incomes of the farmers who grew the rice.

For years, Duong Van Ni and his colleagues at Can Tho University have been educating anyone who’ll listen about the changes in store for the Mekong Delta. The data’s there and it’s persuasive.

On an afternoon in mid-June, as monsoon rain pounded the tin roof of a cafe near campus, Professor Ni walked me through the scenario that staff of the University’s DRAGON (Delta Research and Global Observation Network) Institute have built and presented to countless audiences. It integrates over 100 years of hydrological and climate data with geographic information system and remote-sensing data contributed by the U.S. Geological Survey. 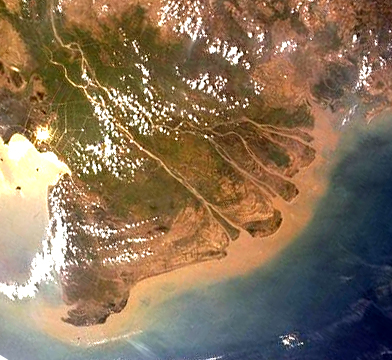 A NASA satellite image of the Mekong Delta.

No delta area, not the mouths of the Ganges, the Nile or the Mississippi, is more vulnerable than the Mekong estuary to the predictable impacts of climate change. The 1-meter sea level rise expected by the end of the 21st century, all else being equal, will displace 3.5-5 million people. If the sea instead rose by 2 meters, lacking effective countermeasures, some 75 percent of the Delta’s 18 million inhabitants would be forced to move to higher ground.

Already, said Professor Ni, there’s been a significant decrease in rainfall in the first part of the annual rainy season, and more rain toward the end. The Mekong’s annual flood peak has fallen by a third since 2000. The waters from upstream carry less silt to replenish the Delta floodplain. Also, the volume of fresh water is falling while the sea level rises. This allows salt-laden tidal water to penetrate further and further into Delta estuaries and swampy coastal areas during the dry season.

Modeling of current trends suggest that average temperatures in the Mekong Delta will rise by more than 3 degrees Celsius toward the end of the century. Annual rainfall will decrease during the first half of the century, and then rise well above the 20th century average. The area that’s flooded each autumn won’t change substantially, but the floods won’t last as long.

All things being equal, rice yields will plummet as temperatures rise. Lighter rains in the early months of the wet season will challenge farmers’ ingenuity. Rising seas and reduced river flows will severely test the system of sea dikes. Riverbanks and the Delta coast are already crumbling; this will accelerate. Farmers who are unable to cope will head north to seek industrial and construction jobs.

That’s not all. At slide 70 (of 86) of the DRAGON presentation, attention shifts to upstream dam construction on Delta water regimes. For China, Laos and Thailand, the hydroelectric potential of the upper Mekong is a seemingly irresistable development opportunity. It may be that not all the dams they plan will be built across the Mekong mainstream. Whether a few or many, their impact on agriculture in Vietnam and Cambodia will be profoundly negative, Professor Ni, his colleagues at Can Tho University, and experts at other institutes in southern Vietnam have pounded the alarm gongs for years. The dam cascade is a nearer and more present danger, and apparently just as unstoppable as climate change.

DRAGON Institute’s slideshow concludes with a call to action. The future is bleak but not hopelessly so if appropriate adaptation and mitigation strategies are launched. What the Delta needs is revealed: sustainable development based on a triply effective foundation of water source security, food security and social security.