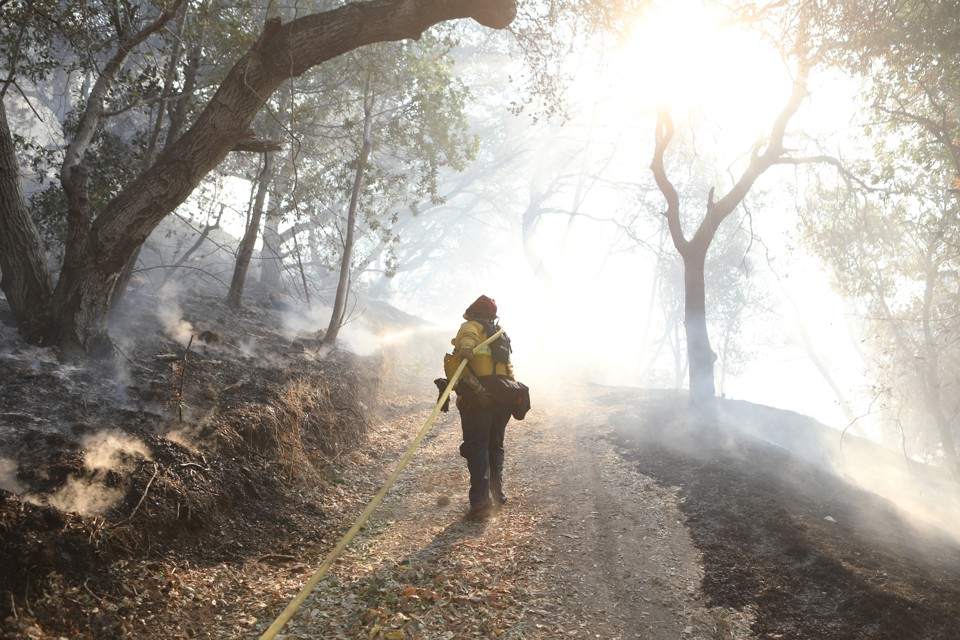 Firefighters work to control a blaze in Sonoma County, California, last week. Jim Urquhart / Reuters
The Napa Valley wildfires are eerily similar to those that often flare up near Los Angeles...

The deadliest and most destructive spate of fires in California’s modern history continues to burn. The string of massive fires in the Napa and Sonoma Valleys have little precedent: They have killed 40 people, destroyed more than 5,700 structures, and incinerated more than 200,000 acres of land. The Washington Post reports that hundreds of people remain missing.

“This is truly one of the greatest tragedies California has ever faced,” said Jerry Brown, the state’s governor.

The fires come amid a rash of unusual weather disasters across the world: Hurricanes Harvey, Irma, and Maria; a landfalling superstorm in Ireland; and deadly wildfires from British Columbia to the Iberian peninsula. 2017 is almost certain to be the second-warmest year ever measured, second only to an El Niño–intensified 2016.

Northern California suffered through a record-breaking heat wave earlier this year. In late August, Napa Valley saw day after day of temperatures above 100 degrees Fahrenheit. Those hot days are blamed in part for desiccating the region’s foliage, essentially preparing the area for this month’s wildfires.

But the Napa-Sonoma wildfires have surprised experts for reasons other than their size or intensity. Driven by hot, dry winds from the state’s interior, the North Bay blazes resemble Southern California’s wildfires, which often burst into life in the Santa Ana winds. Those winds, like the gusts whipping the north, are also hot, dry, and east-to-west. (And the subject of a dynamite Joan Didion essay, but that’s another story.)

“The warming you would expect by the end of the century would be equivalent to a shift in latitude.”

In their entirety, the fires—from their speed to their wind-driven nature—suggest a much more southwest-like climate than the region today. Is this the future? Will climate change turn Northern California into Southern California?

“The comparison is not a bad one,” said Alex Hall, a professor of atmospheric science and the director of the Center for Climate Science at the University of California, Los Angeles.

It might be literally true for temperature. If greenhouse-gas emissions continue on roughly their current trajectory, then Northern California’s temperatures will warm by between 6 and 11 degrees Fahrenheit by 2100.

“That’s approximately the current temperature difference between Southern and Northern California on the coast,” says Hall. “The warming you would expect by the end of the century would be equivalent to a shift in latitude.”

He added that it’s not clear whether wind-driven fires will increase in Northern California in a warmed world. In Southern California, researchers predict that the amount of area burned by wildfires will double through the end of the century, as the Santa Ana winds become even drier.

Michael Wehner, a senior staff scientist at the Lawrence Berkeley National Laboratory, said that while the north’s future temperatures might resemble Los Angeles, its future precipitation would not. “Precipitation in Northern California will not likely decrease to Southern California levels. Future precipitation in NorCal will undergo a phase change, i.e., a larger fraction in the Sierra will fall as rain instead of snow due to warmer temperatures,” he told me in an email.

“It would likely be something completely different than either Northern or Southern California.”

Some climate models suggest that storm systems will also make landfall further north in California as the century goes on, bringing more precipitation to the state’s north half and Oregon. But Wehner cautioned: “This is yet to be documented in the observational record however, whereas increases in temperature, decreases in snowpack, and drier conditions all have to varying degrees.”

“It is likely an oversimplification to state that future NorCal landscapes become SoCal current landscapes. It would likely be something completely different than either,” he added.

There’s some precedent for swapping the two regions’ temperature profiles—though it last happened in the other direction. When glaciers covered the top third of North America 26,000 years ago, the climate of modern-day Los Angeles was 6 to 11 degrees Fahrenheit cooler—comparable, in other words, to San Francisco.

California as a whole is projected to be drier and hotter in the decades to come. The U.S. government projects the Sonoran, Mojave, and Great Basin deserts to expand as climate change continues to take hold. Since water evaporates faster into hotter air, it also estimates that the Sierra Nevadan snowpack will shrink and as a whole California’s water problems will get worse.

Outside of California, there’s widespread evidence that global warming has already made the West’s wildfires more intense and more expansive. As I wrote last month, a study in Proceedings of the National Academy of Sciences last year found that the size of the area burned by wildfires has doubled over the past 33 years. And the area of forest burned annually in the Pacific Northwest has increased by 5,000 percent since the early 1970s.

Robinson Meyer is an associate editor at The Atlantic, where he covers technology.
source: https://www.theatlantic.com/
original story HERE