WITH LANDMARK CLIMATE ACCORD, WORLD MARKS TURN FROM FOSSIL FUELS... 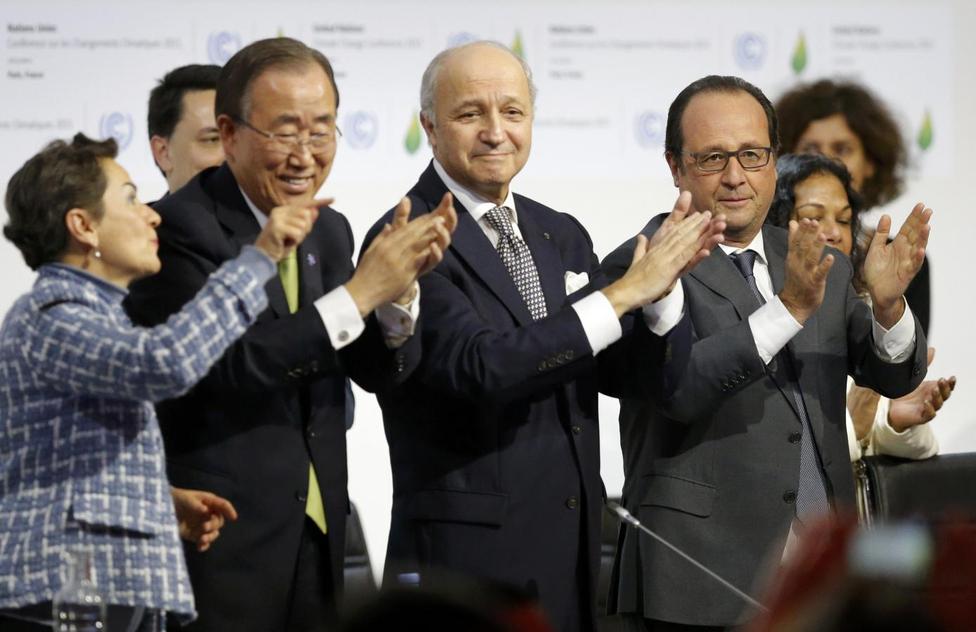 The global climate summit in Paris forged a landmark agreement on Saturday, setting the course for a historic transformation of the world's fossil fuel-driven economy within decades in a bid to arrest global warming...

"With a small hammer you can achieve great things," Fabius said as he gaveled the agreement, capping two weeks of tense negotiations at the summit on the outskirts of the French capital.

Hailed as the first truly global climate deal, committing both rich and poor nations to reining in rising emissions blamed for warming the planet, it sets out a sweeping, long-term goal of eliminating net manmade greenhouse gas output this century.

"It is a victory for all of the planet and for future generations," said U.S. Secretary of State John Kerry, who led the U.S. negotiations in Paris.

"We have set a course here. The world has come together around an agreement that will empower us to chart a new path for our planet, a smart and responsible path, a sustainable path."

It also creates a system to encourage nations to step up voluntary domestic efforts to curb emissions, and provides billions more dollars to help poor nations cope with the transition to a greener economy powered by renewable energy.

Calling it "ambitious and balanced", Fabius said the accord would mark a "historic turning point" in efforts to avert the potentially disastrous consequences of an overheated planet.

For U.S. President Barack Obama, it is a legacy-defining accomplishment that, he said at the White House, represents "the best chance we have to save the one planet that we've got."

The final agreement was essentially unchanged from a draft unveiled earlier in the day, including a more ambitious objective of restraining the rise in temperatures to "well below" 2 degrees Celsius (3.6 degrees Fahrenheit) above pre-industrial levels, a mark scientists fear could be a tipping point for the climate. Until now the line was drawn only at 2 degrees.

In some ways, its success was assured before the summit began: 187 nations have submitted detailed national plans for how they will contain the rise in greenhouse gas emissions, commitments that are the core of the Paris deal.

While leaving each country to pursue those measures on its own, the agreement finally sets a common vision and course of action after years of bickering over how to move forward.

Officials hope a unified stance will be a powerful symbol for world citizens and a potent signal to the executives and investors they are counting on to spend trillions of dollars to replace coal-fired power with solar panels and windmills.

"This agreement establishes a clear path to decarbonize the global economy within the lifetimes of many people alive today," said Paul Polman, the CEO of consumer goods maker Unilever and a leading advocate for sustainable business practices. Polman said it will "drive real change in the real economy".

TOO MUCH, OR NOT ENOUGH?

While some climate change activists and U.S. Republicans will likely find fault with the accord - either for failing to take sufficiently drastic action, or for overreacting to an uncertain threat - many of the estimated 30,000 officials, academics and campaigners who set up camp on the outskirts of Paris say they see it as a long-overdue turning point.

Six years after the previous climate summit in Copenhagen ended in failure and acrimony, the Paris pact appears to have rebuilt much of the trust required for a concerted global effort to combat climate change, delegates said.

World climate accord hailed as turning point from fossil fuels

"Whereas we left Copenhagen scared of what comes next, we'll leave Paris inspired to keep fighting," said David Turnbull of Oil Change International, a research and advocacy organization opposed to fossil fuel production.

Most climate activists reacted positively, encouraged by long-term targets that were more ambitious than they expected, while warning it was only the first step of many.

From the outset, some criticized the deal for setting too low a bar for success. Scientists warned that the envisaged national emissions cuts will not be enough to keep warming to less than 2 degrees Celsius.

Unlike the Kyoto Protocol, the last major climate deal reached in 1997, the Paris pact will also not be a fully legally binding treaty, something that would almost certainly fail to pass the U.S. Congress.

In the United States, many Republicans will see the pact as a dangerous endeavor that threatens to trade economic prosperity for an uncertain if greener future. Some officials fear U.S. progress could stall if a Republican is elected president next year, a concern Kerry brushed aside.

After talks that extended into early morning, the draft text showed how officials had resolved the stickiest points.

In a win for vulnerable low-lying nations who had portrayed the summit as the last chance to avoid the existential threat of rising seas, nations would "pursue efforts" to limit the rise in temperatures to 1.5 degrees Celsius (2.7 degrees Fahrenheit), as they had hoped.

"Our head is above water," said Olai Uludong, ambassador on climate change for the Pacific island state of Palau.

While scientists say pledges thus far could see global temperatures rise by as much as 3.7 degrees Celsius (6.7 degrees Fahrenheit), the agreement also lays out a roadmap for checking up on progress. The first "stocktake" would occur in 2023, with further reviews every five years to steadily increase or "ratchet up" those measures.

It softened that requirement for countries with longer-term plans extending to 2030, such as China, which had resisted revisiting its goal before then.

And for the first time, the world has agreed on a longer-term aspiration for reaching a peak in greenhouse emissions "as soon as possible" and achieving a balance between output of manmade greenhouse gases and absorption - by forests or the oceans - by the second half of this century.

It also requires rich nations to maintain a $100 billion a year funding pledge beyond 2020, and use that figure as a "floor" for further support agreed by 2025, providing greater financial security to developing nations as they wean themselves away from coal-fired power.