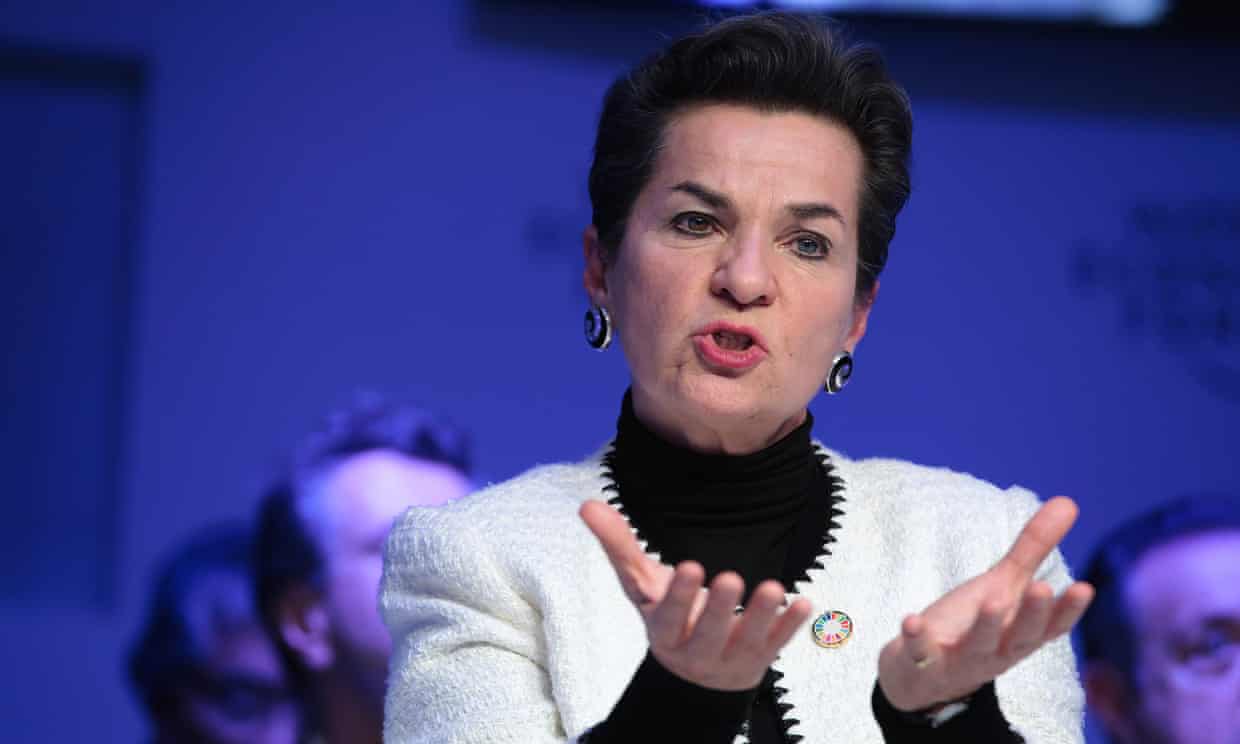 Former UN climate chief Christiana Figueres: “We stand at the doorway of being able to bend the emissions curve downwards by 2020.” Photograph: Jason Alden/Getty Images

Former UN climate chief Christiana Figueres among signatories of letter warning that the next three years will be crucial to stopping the worst effects of global warming...

(Job One Editor's note: FINALLY Someone who is on the correct timeline!!! To see how wrong most are and see how soon NON-CORRECTABLE Turning/Tipping Points will be hit and how we can stop the earth from reaching them, purchase our new book "Climageddon"

Avoiding dangerous levels of climate change is still just about possible, but will require unprecedented effort and coordination from governments, businesses, citizens and scientists in the next three years, a group of prominent experts has warned.

Warnings over global warming have picked up pace in recent months, even as the political environment has grown chilly with Donald Trump’s formal announcement of the US’s withdrawal from the Paris agreement. This year’s weather has beaten high temperature records in some regions, and 2014, 2015 and 2016 were the hottest years on record.

But while temperatures have risen, global carbon dioxide emissions have stayed broadly flat for the past three years. This gives hope that the worst effects of climate change – devastating droughts, floods, heatwaves and irreversible sea level rises – may be avoided, according to a letter published in the journal Nature this week.

The authors, including former UN climate chief Christiana Figueres and Hans Joachim Schellnhuber of the Intergovernmental Panel on Climate Change, argue that the next three years will be crucial. They calculate that if emissions can be brought permanently lower by 2020 then the temperature thresholds leading to runaway irreversible climate change will not be breached.

Figueres, the executive secretary of the UN Framework Convention on Climate Change, under whom the Paris agreement was signed, said: “We stand at the doorway of being able to bend the emissions curve downwards by 2020, as science demands, in protection of the UN sustainable development goals, and in particular the eradication of extreme poverty. This monumental challenge coincides with an unprecedented openness to self-challenge on the part of sub-national governments inside the US, governments at all levels outside the US, and of the private sector in general. The opportunity given to us over the next three years is unique in history.”

Schellnhuber, director of the Potsdam Institute for Climate Impact Research, added: “The maths is brutally clear: while the world can’t be healed within the next few years, it may be fatally wounded by negligence [before] 2020.”

Scientists have been warning that time is fast running out to stave off the worst effects of warming, and some milestones may have slipped out of reach. In the Paris agreement, governments pledged an “aspirational” goal of holding warming to no more than 1.5C, a level which it is hoped will spare most of the world’s lowest-lying islands from inundation. But a growing body of research has suggested this is fast becoming impossible.

Paris’s less stringent, but firmer, goal of preventing warming from exceeding 2C above pre-industrial levels is also in doubt.

The authors point to signs that the trend of upward emissions is being reversed, and to technological progress that promises lower emissions for the future. Renewable energy use has soared, creating a foundation for permanently lowering emissions. Coal use is showing clear signs of decline in key regions, including China and India. Governments, despite Trump’s pronouncements, are forging ahead with plans to reduce greenhouse gases.

The authors called for political and business leaders to continue tackling emissions and meeting the Paris goals without the US. “As before Paris, we must remember that impossible is not a fact, it’s an attitude,” they wrote.

They set out six goals for 2020 which they said could be adopted at the G20 meeting in Hamburg on 7-8 July. These include increasing renewable energy to 30% of electricity use; plans from leading cities and states to decarbonise by 2050; 15% of new vehicles sold to be electric; and reforms to land use, agriculture, heavy industry and the finance sector, to encourage green growth.

Prof Gail Whiteman said the signs from technical innovation and economics were encouraging: “Climate science underlines the unavoidable urgency of our challenge, but equally important is the fact that the economic, technical and social analyses show that we can resoundingly rise to the challenge through collective action.”

While the greenhouse gases poured into the atmosphere over the last two centuries have only gradually taken effect, future changes are likely to be faster, scientists fear. Johan Rockström of the Stockholm Resilience Centre said: “We have been blessed by a remarkably resilient planet over the past 100 years, able to absorb most of our climate abuse. Now we have reached the end of this era, and need to bend the global curve of emissions immediately, to avoid unmanageable outcomes for our modern world.”