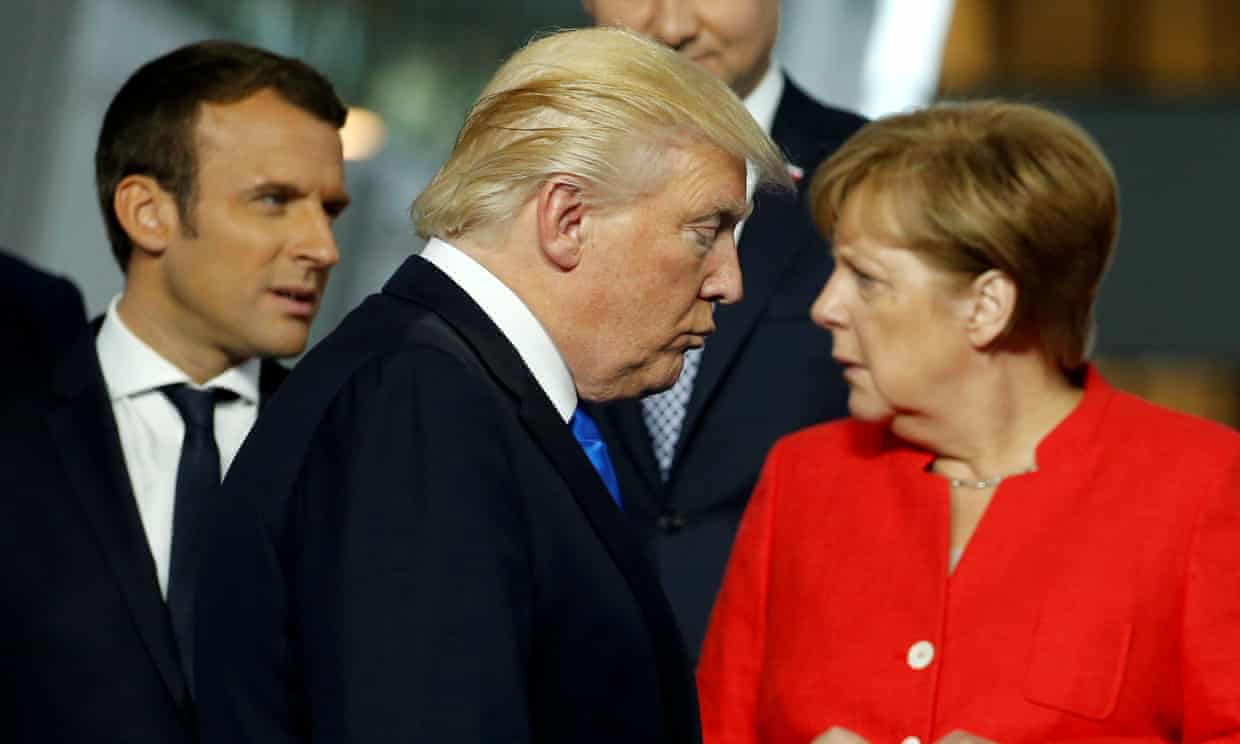 Donald Trump walks past French president Macron and German chancellor Merkel during a Nato summit. Trump withdrew the US from the Paris deal on Thursday. Photograph: Jonathan Ernst/Reuters

Joint statement by France, Germany and Italy says deal cannot be renegotiated, while other countries reaffirm commitment to carbon reduction...

European leaders dismissed Donald Trump’s claim that the Paris climate accord can be renegotiated after the US president announced he will pull out of the deal struck in 2015 to seek better terms.

Shortly after Trump’s announcement, the leaders of France, Germany and Italy released a joint statement rejecting Trump’s assertion that the climate deal can be redrafted.

“We deem the momentum generated in Paris in December 2015 irreversible, and we firmly believe that the Paris agreement cannot be renegotiated, since it is a vital instrument for our planet, societies and economies,” said German chancellor Angela Merkel, French president Emmanuel Macron and Italian prime minister Paolo Gentiloni.

The three leaders called on their allies to speed up efforts to combat climate change and promise to do more to help developing countries adapt.

Merkel called Trump immediately after he delivered his announcement to personally express her regret at his decision, her spokesman, Steffen Seibert, said on Twitter.

During the conversation she stressed that Germany would stick to the agreement.

He added in another tweet in English: “Chancellor Merkel disappointed w/Pres. Trump’s decision. Now more than ever we will work for global policies that save our planet,” he wrote.

Chancellor Merkel disappointed w/ Pres. Trump's decision. Now more than ever we will work for global climate policies that save our planet.

Immediately after her call to Trump, Merkel telephoned Macron, he said, and they agreed that “Germany and France will grasp at new initiatives in order to ensure the climate agreement is a success”.

In a televised address in French and English, Macron said that Trump had “committed an error for the interests of his country, his people and a mistake for the future of our planet”.

In contrast, the British government was slow to respond to the announcement. Downing Street issued a statement saying that Theresa May had told Trump of her “disappointment” at his decision and stressed that Britain remained committed to the agreement.

Downing Street sources would not say whether the prime minister had been asked to sign the letter of condemnation sent by Germany, France and Italy, but said that she had made her point directly to Trump.

The unyielding response of Italy, France and Germany came amidst a tsunami of global condemnation for Trump’s decision to renege on an agreement made by 195 countries after decades of negotiation. The US will join Syria and Nicaragua as the only governments to be outside the agreement.

The most furious reaction was in Germany, where tomorrow’s front page of German tabloid Berliner Kurier carries the blunt headline: “Earth to Trump: Fuck You”.

Prime ministers of America’s neighbours condemned the decision and reaffirmed their support for the Paris agreement. In Mexico, Enrique Peña Nieto said: “Mexico maintains its support and commitment to the Paris agreement to stop the effects of global climate change.”

The Canadian prime minister, Justin Trudeau, called Trump to express his disappointment at the decision, but said he was inspired by “the growing momentum around the world to combat climate change and transition to clean growth economies”.

The Vatican said a US pullout represented a “huge slap in the face” for the pope and a “disaster for everyone”. Pope Francis only days ago met Trump and impressed on him the importance of protecting the environment from climate change.

Japan’s foreign ministry said: “Climate change requires a concerted effort by the whole of the international community. Japan believes the leadership of the developed countries to be of great importance, and the steady implementation of the Paris agreement is critical in this regard. The recent announcement by the US administration on its withdrawal … is regrettable.”

In stronger comments, Japan’s environment minister, Koichi Yamamoto, said: “It’s as if they’ve turned their back on the wisdom of humanity.

“In addition to being disappointed, I’m also angry.”

In Australia, the energy and environment minister, Josh Frydenberg, said he was disappointed with Trump’s decision but reiterated the government’s full commitment to meeting its Paris targets. “We believe that the targets we agreed to, the 26% to 28% reduction in emissions by 2030 on 2005 levels are reasonable, are achievable.”

New Zealand’s climate change minister, Paula Bennett, said that “so much of what [Trump] said is wrong”, arguing that America was not paying a disproportionate cost to be part of the deal.

Trump said he was taking his decision to protect US jobs. “We’re getting out,” the US president had said, in attacking the Paris accord’s financial burdens as “draconian”.

However, many business leaders say he has handed the advantage in the key field of renewable energy to rivals in China and the Europe. Scientists said they feared for their children.

Trump’s speech on the Paris climate agreement, in full

World leaders had already begun preparing for a US exit. China’s premier, Li Keqiang, said on Thursday that fighting climate change was a “global consensus” and an “international responsibility”. The EU and China have forged a new alliance on climate change and are currently midway through a summit in Brussels at the end of which they will announce plans to step up efforts.

The EU’s commissioner for climate action and energy, Miguel Arias Cañete, said Trump’s unilateral decision marked a sad day for the global community, but he vowed the accord would endure.

“Today’s announcement has galvanised us rather than weakened us, and this vacuum will be filled by new broad committed leadership. Europe and its strong partners all around the world are ready to lead the way,” he said.

The president of the European parliament, Antonio Tajani, said: “It is a matter of trust and leadership. This decision will hurt the US and the planet.” 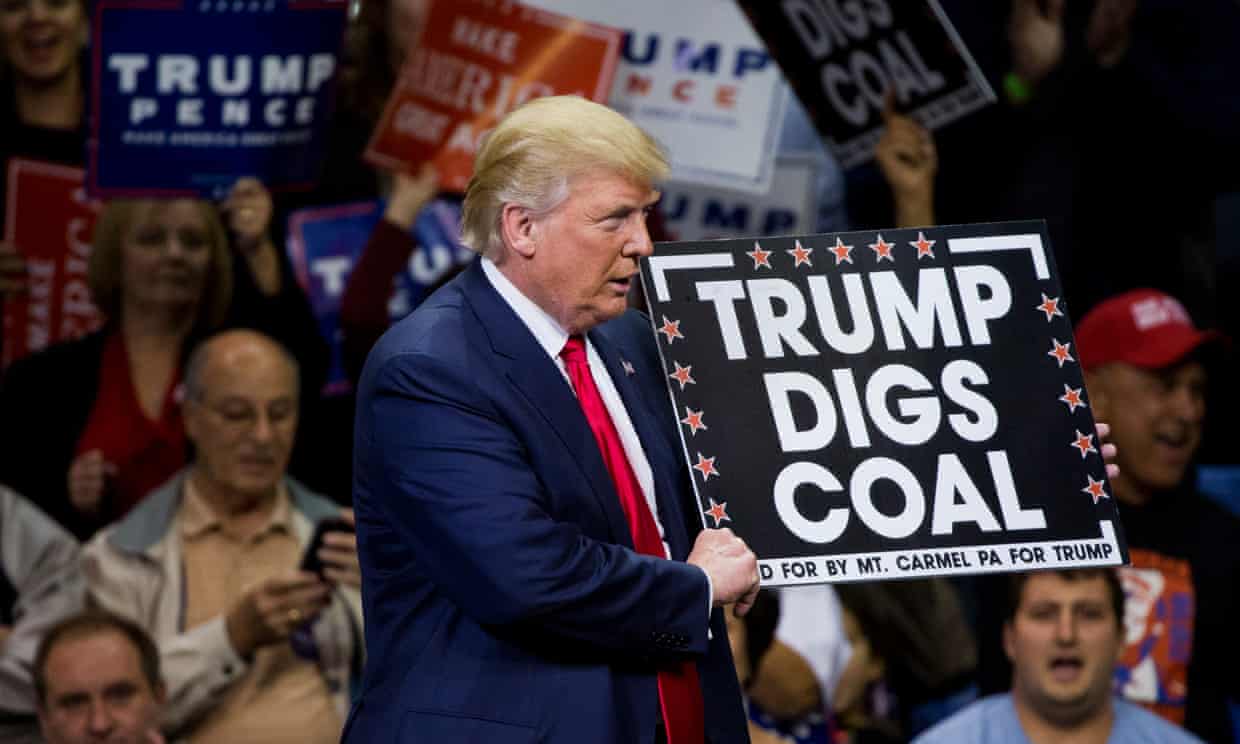 Damian Carrington: The US abandoning the global climate deal brings risks, but the unity of the rest of the world and plummeting green energy costs are reasons for hope. Read more...

Izabella Teixeira, who lead the Brazilian negotiating team in 2015, described Trump’s announcement as a “heart attack” but said the world would survive. She dismissed suggestions that any new deal would have to ignore US historical emissions. “These are old ideas, old politics,” she told the Guardian.

The Indian government did not immediately react to Trump’s announcement, which came shortly after 1am local time, but India’s energy minister recently reaffirmed the south Asian giant’s commitment to the global climate agreement. The world’s third-largest carbon pollution emitter is on course to exceed the renewable energy targets it set in Paris in 2015 by nearly 50%, and three years ahead of schedule.

Trump’s withdrawal announcement came in the late evening in Russia, and official commentary was not immediately available. But Vladimir Putin’s spokesman, Dmitry Peskov, said earlier on Thursday that Russia “attaches great importance” to the Paris climate accord, and a US withdrawal could complicate the agreement’s implementation. 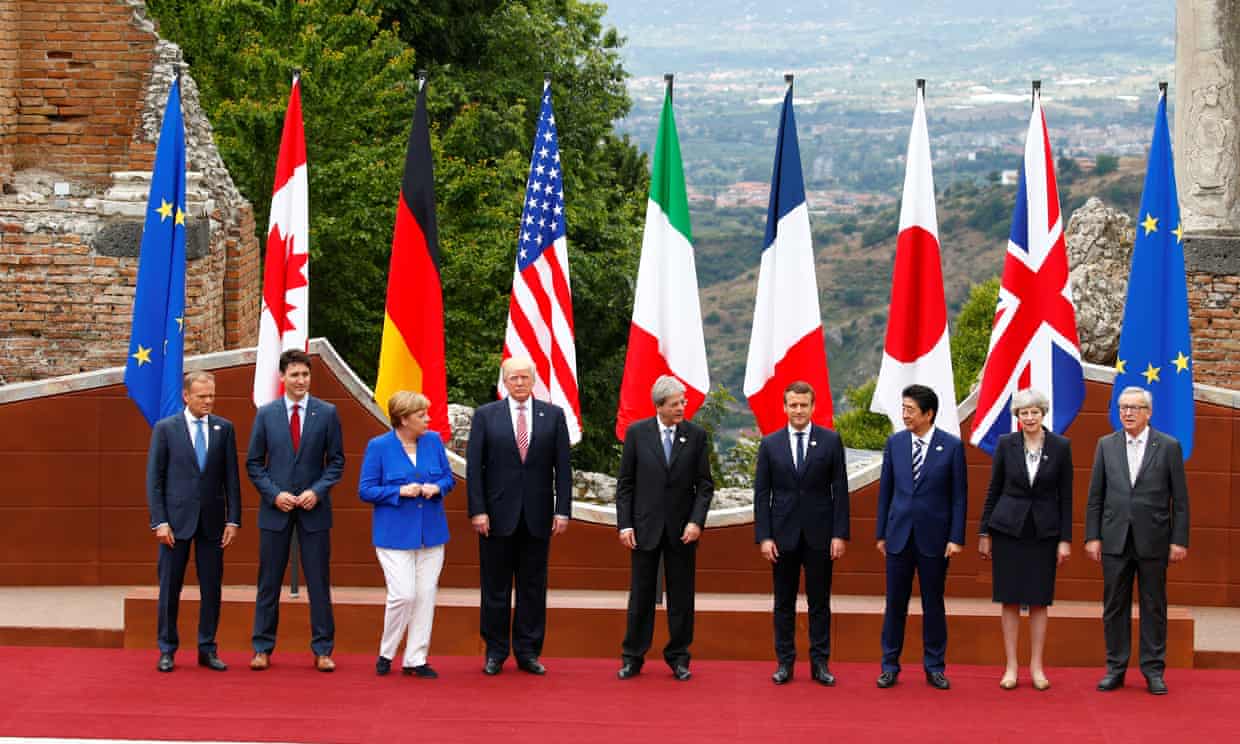 Donald Trump with other world leaders during the G7 summit on 26 May. Photograph: Tony Gentile/Reuters

“Of course, the effectiveness and realisation of this convention will be hampered without key participants,” Peskov told journalists. “There is no alternative (to the accord) at this time.”

The US has long been a key – though not always enthusiastic – player in international efforts to mitigate the already apparent trends of increasing temperatures, rising sea levels and more frequent and intense droughts, floods and storms.

Trump is accused of jettisoning this international role and putting the domestic fossil fuel industry first. Though his term may be too short to complete the job he has begun. 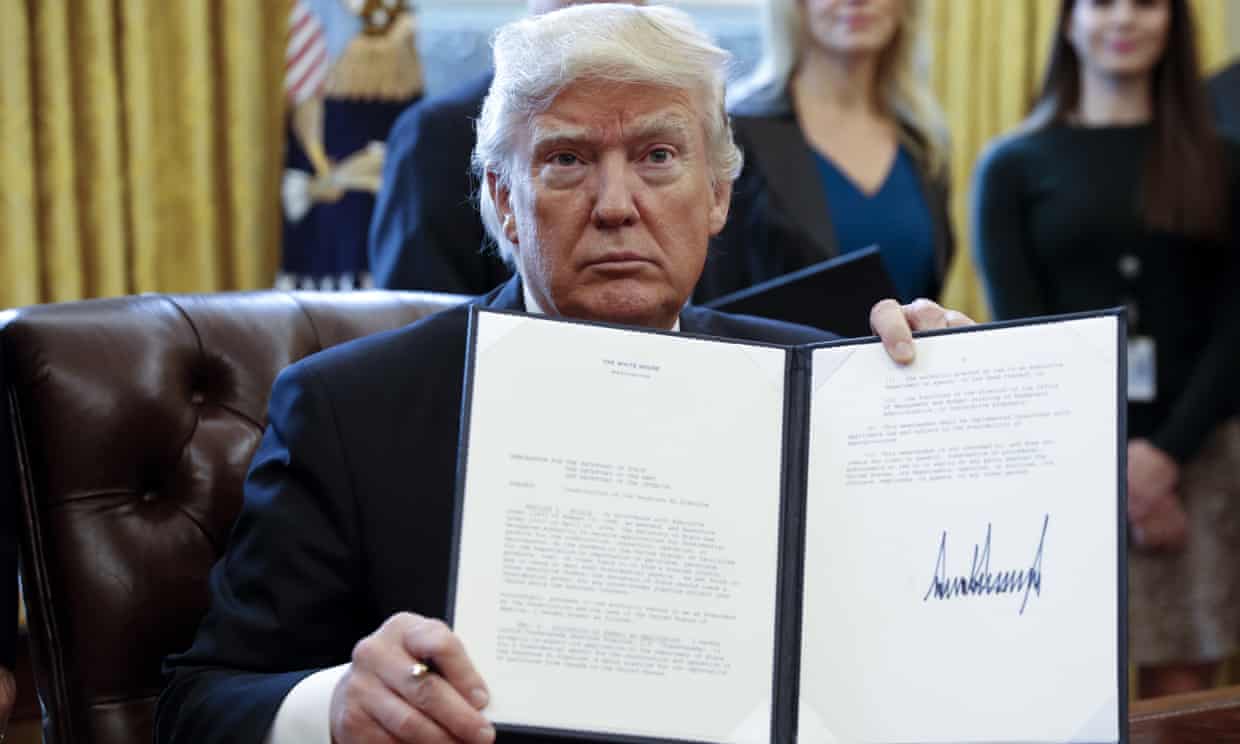 Lukas Hermwille, scientific researcher in the field of international climate policy at the Wuppertal Institute for Climate, Environment and Energy, drew attention to the fact that the exit from the agreement would anyway only come into effect in around three years’ time “ironically”, he told Die Welt, “on the day after the next US presidential election”. But Trump could still spend the rest of his time in office torpedoing climate protection from the inside out, he added.

Environmental groups were appalled. Tanya Steele, CEO of WWF said the decision makes it harder for the world to reach a safer and more prosperous future. “It is hugely disappointing that President Trump is making the mistake in rowing back on the Paris agreement,” she said, “Climate change is a very real global issue that affects the successful future of our planet.”

Carlos Rittl, executive secretary of the Brazilian Climate Observatory said the decision “creates the risk of a domino effect” that could put the target of keeping temperature rises below 2C (3.6F) out of reach, though he held out hope that global talks can make greater progress in reducing fossil fuels and promoting renewable energy in the absence of a country that has flitted back and forth between leadership and obstruction.

Many US mayors have said they will abide by climate commitments regardless of the White House U-turn. This was echoed by municipal leaders overseas.

The mayor of Paris, Anne Hidalgo, who chairs a group of 40 major cities, said: “No matter what decision is made by the White House, cities are honouring their responsibilities to implement the Paris agreement. There is no alternative for the future of our planet.”

Additional reporting by Kim Willsher in Paris, Alec Luhn in Moscow and Michael Safi in Delhi