Policemen fight with activists during a protest ahead of the 2015 Paris Climate Conference at the place de la Republique, in Paris, Sunday, Nov. 29, 2015. More than 140 world leaders are gathering around Paris for high-stakes climate talks that start Monday, and activists are holding marches and protests around the world to urge them to reach a strong agreement to slow global warming. (Laurent Cipriani/Associated Press)

PARIS — Hundreds of thousands of people have taken part in rallies around the world on Sunday, calling on leaders to halt climate change on the eve of a major conference in Paris.

The nearly two-week conference comes more than two weeks after the Paris attacks. A state of emergency was imposed in France after the carnage, and marches have been banned.

But violence quickly erupted between French riot police and a group of several hundred at a major square in Paris that was the site of a peaceful demonstration earlier. Police fired tear gas to disperse protesters throwing projectiles.

An organizer of the rallies, Avaaz, said that early estimates of marchers around the globe show 570,000 people marched in 175 countries.

Here are some of the rallies that took place in Europe on Sunday.

Thousands of demonstrators gathered in central Paris and formed a human chain along the route of a long-planned protest march that was banned by the French government in a security crackdown following the Nov. 13 Paris attacks. Nearby, thousands of shoes, some decorated, were placed at the Place de la Republique to symbolize the many feet that could not march because of the ban.

But violence erupted as the day progressed with several hundred people, some of them masked, throwing objects at riot police blockading the square in a bid to break through, and desecrating a memorial made of flowers and candles for the 130 victims of the attacks.

Interior Minister Bernard Cazeneuve said 174 people were jailed for possible charges. He said, separately, that 26 people have been placed under house arrest, stressing they weren’t militants but people known for violence in the past.

Some protesters chanted “a state of emergency is a police state.”

Paris police chief Michel Cadot said that a group of 200 or 300 people violated a ban on protests under the country’s state of emergency. Cadot said that the group lobbed glass bottles and other projectiles, including candles set out in homage to the victims of the extremist attacks. Shoes laid out at the earlier ceremony also were tossed about. Police fired numerous rounds of tear gas to disperse the group.

President Francois Hollande denounced the violence by a minority as “scandalous,” both because the clashes were caused by “disruptive elements” that have nothing to do with environmental activists and because they occurred at Place de la Republique, which has been a memorial square for the victims Paris attacks. He said “everything will be done” to ensure they are not present during the conference.

Prime Minister Manuel Valls also denounced the violence in a tweet, saying that respecting the square, used to pay homage to attack victims, “is to respect the memory of victims.”

It was not immediately clear if those involved in the violence were from a specific group. A known climate pressure group, 350.org, said the protesters were “unaffiliated with the climate movement and broke “the non-violent pledge that every group involved in the climate coalition” signed off on.

The protests were held ahead of the critical global warming talks outside Paris beginning on Monday.

Thousands of people took to the streets of several Spanish cities to demand a commitment from world leaders to halt climate change in what organizers are calling the largest pro-environment mobilization in Spain to date.

Friends of the Earth and Greenpeace both said around 20,000 protesters marched between Cibeles and Puerta del Sol in Madrid, while thousands also marched through cities such as Barcelona, ??Bilbao, Las Palmas, Murcia, Pamplona, ??Seville, Valladolid and Zaragoza.

At a march through the streets of Madrid, one banner read, “I am marching for my children and grandchildren” and another said “We don’t have a planet B.”

“Well, to be honest we don’t expect much (from the politicians). That’s why we are here,” said Incarnacion Florin. “We have to do something. It must make a difference.”

The gatherings were organized by more than 400 Spanish non-governmental organizations and other groups. Others around Spain were organized by the Alliance for the Climate and call on world leaders to reach “a fair, ambitious and binding agreement to avoid the worst consequences of climate change and accelerate the transition toward renewable sources of energy by 2050.

Thousands of people marched through London, urging world leaders not to blow their chance to take strong action on climate change.

Corbyn told the crowd that the talks were “an enormous opportunity” to tackle “pollution, climate change, inequality, environmental refugees, war refugees and resources wars. If we are to make a real difference in Paris, all these issues have got to be thought about and addressed.”

Thompson said that climate change, once seen as a fringe cause, was now “the issue of the 21st century.”

Numbers at the London march from Hyde Park to the Whitehall government district were swelled by the ban on a protest march in Paris.

About 4,000 people held a rally in the German capital, marching from Berlin’s train station to the Brandenburg Gate to listen to speeches and music.

The protesters called on the delegates at the Paris conference to set ambitious targets, using an array of signs, including a picture of a polar bear with “Save Me” written on it, or simply “Stop Global Warming.”

“I hope that there is a climate agreement that really helps, but I fear actually that the countries and government leaders will only agree to something that won’t help, primarily a weak agreement that will not help the living conditions on this planet,” said Dr. Anton Hofreiter, member of the Green Party in Germany’s parliament.

Philippe Sotto in Paris, Jamey Keaten in Brussels, and Jill Lawless in London, and Harold Heckle in Madrid, contributed to this report.

I just arrived in Paris for the global climate talks that start here today, and one of the first things I saw when I turned on my computer was the stream of photos coming from thousands of Global Climate March events across the globe.

What I saw was the beauty and power of a growing movement.

Melbourne hosted Australia's biggest climate action ever (60,000 people!), tens of thousands of Filipinos danced through Quezon City for climate justice, Egyptians ran and then marched through the streets of Cairo -- and so much more.

In total over 785,000 people marched this weekend, making it one of the biggest climate mobilizations ever in history.

There is obviously still a long fight ahead of us. But particularly after this weekend, it's becoming harder and harder to avoid the conclusion that we're close to something very big: a moment when the world can break free of fossil fuels, keep carbon in the ground, and build a just transition to 100% renewable energy for all.

I also want to mention the dedication of our team in Paris, who have worked through both heartbreak and a constantly shifting landscape about what activities the climate movement can take on there. Despite tight restrictions on activism placed by the French government, yesterday thousands of people formed a human chain stretching through the heart of the city to show their resolve to continue the fight for climate justice: 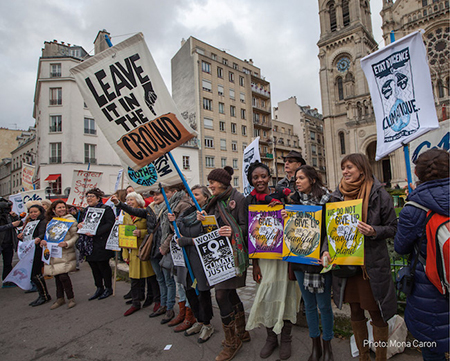 Then, this morning I helped hand millions of petitions calling for 100% clean energy for all to the President of the Marshall Islands, Christopher Loeak, who then carried them to heads of state as talks began.

Those messages are the beginning of an important two-week debate about the planet's future. There will be much to do afterwards, but what happens here in Paris is a crucial piece of the puzzle. If you want to stay up to date with breaking news from the talks, and weigh in on crucial issues as they develop, click here to be part of the Paris Rapid Response team.

You can also keep plugged in via 350.org’s Twitter, Facebook Page, or our Live Blog from Paris. We’ll have some updates this week, but the biggest issues will be decided as the clock ticks down in week two.

Here's the line in Saturday's New York Times that sums up what's at stake: "If successful, the Paris meeting could spur a fundamental shift away from the use of oil, coal and gas to the use of renewable energy sources such as wind and solar power."

I'll be in the talks here for most of the next week. Everyone inside in Paris will be thinking of you outside, and the work you're doing to make that shift possible. If -- or when -- this transition happens, you will be a critical part of it.

P.S. Activists near you already have their eyes on the next thing! On December 12th, at the very end of the climate summit, folks near you are organizing an action to make sure that the people have the last word -- no matter what happens over the next two weeks.