WORRIED WORLD URGES TRUMP NOT TO PULL OUT OF PARIS CLIMATE AGREEMENT... 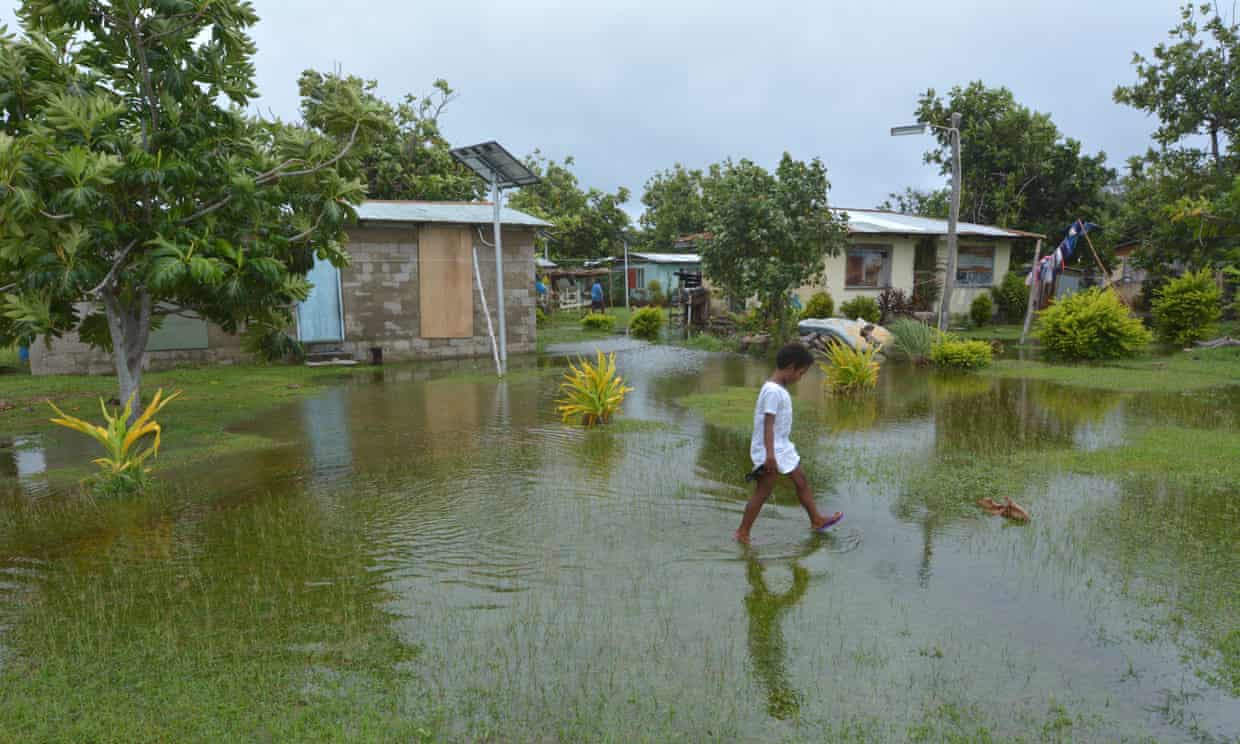 Floods in Fiji. Pacific island nations are particularly vulnerable to rising sea levels, and Frank Bainimarama, the Fijian president, has written to Trump to urge him to stay in the Paris deal. Photograph: Chameleonseye/Getty Images

Donald Trump’s scorched-earth approach to environmental protections has shocked current and former government officials overseas who are waiting nervously to see whether the US will destabilize the Paris climate agreement by pulling out of the deal...

The Guardian has spoken to a number of officials from key countries before Trump makes a decision on the Paris agreement this month. Trump’s announcement might come as early as this week. 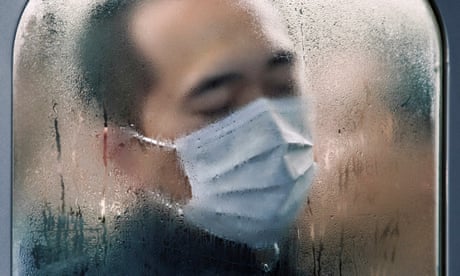 Red alert: Kofi Annan on the photos that capture our choking planet

“Trump’s actions on the climate are worrying,” said Izabella Teixeira, the former Brazilian environment minister. “Although it is still too early to be sure what his strategy is for the US, the signs so far of backsliding are a concern to anyone who was involved in the long process that lead up to the Paris agreement,” said the veteran negotiator, who was credited with a key role in securing the international deal in 2015.

“We certainly could not have imagined this political picture when we signed the agreement in Paris,” said Teixeira. “It is a concern because we saw a similar situation when George W Bush came to power and backed away from the Kyoto protocol”.

The US president has started peeling away many of the pollution rules imposed by Barack Obama’s administration, such as the signature Clean Power Plan, new vehicle emissions standards, clean water regulations, and curbs on toxic discharge from power plants.

Keystone XL and Dakota Access, two major and controversial oil pipelines, have been approved. Last week, the president ordered reviews of protected areas on land and water with the goal of opening them up to further oil and gas drilling. Trump said he was “unleashing American energy and clearing the way for thousands and thousands of high-paying American energy jobs.”

The administration is now mulling whether the US should stay in the Paris climate agreement, a landmark deal struck by nearly 200 nations to lower greenhouse gas emissions that was ratified last year. Trump has previously promised to “cancel” the deal, but his advisers are reportedly split over whether quitting the compact would be worth the resulting diplomatic fallout.

Last week a senior UN official warned the US would suffer economically if it chooses to pull out of Paris, citing the clean energy jobs that will be created as countries decarbonize their electricity sources. “There is no doubt where the future is and that is what all the private sector companies have understood,” Erik Solheim, UN environment chief, told Reuters. “The future is green. Obviously if you are not a party to the Paris agreement, you will lose out. And the main losers of course will be the people of the United States itself because all the interesting, fascinating new green jobs would go to China and to the other parts of the world that are investing heavily in this.”

Pacific island nations particularly vulnerable to the rising seas, heatwaves and droughts wrought by increasing global temperatures are particularly alarmed at the sharp reversal in climate policy by the US, the world’s second largest emitter of greenhouse gases.

Frank Bainimarama, the prime minister of Fiji, has written to Trump to urge him to stay within the Paris agreement. Bainimarama will officially head the UN climate change talks taking place in Bonn, Germany in November. “Climate change is not a hoax. it is frighteningly real,” Bainimarama told a conference in Melbourne. “Billions of people are losing the ability to feed themselves. Don’t let the whole side down by leaving, just when we have a game plan.”

Hilda Heine, the president of the Marshall Islands, a scattered group of low-lying coral islands, said she was “extremely disappointed to see the United States seeking to roll back its efforts to reduce emissions”. She added: “My country’s survival depends on every country delivering on the promises they made in Paris. Our own commitment to it will never waiver.”

Given America’s huge emissions and diplomatic clout, its domestic climate policies are being closely watched by other governments. They have noted Trump’s intention to cut the Environmental Protection Agency’s budget by nearly a third – even though Congress had other ideas – and the climate change denial of many in the administration, including the president himself.

“I’m very worried by what is happening in the US regarding climate change. It was an extraordinarily strong shock to hear that Trump has signed a decree to revise the clean power plan,” said Ramón Méndez, former head of Uruguay’s climate policy who was among those who hammered out the Paris agreement in 2015. “Of all of Trump’s policies, this is the one with the worst consequences for the world.”

Without the US – which is responsible for almost a fifth of all emissions on the planet – Méndez told the Guardian it would be extremely difficult to reach the goal of keeping temperature rises below 1.5C. It would also set a bad example. “If an important country like the US, which has the second biggest emissions after China, doesn’t abide by the Paris agreement, then the Paris agreement is broken. It will make it harder for other countries to maintain their ambitions,” he said.

Mendez said it was “terrifying” that Scott Pruitt, the administrator of the EPA, has denied that carbon dioxide was a primary driver of global warming. Pruitt’s denial contradicts the EPA’s own scientists, although the future visibility of such evidence is in question as the agency is currently “updating language” on climate change and regulations on its website.

Should the US completely vacate the international effort to combat global warming, many observers consider it an opportunity for China to use the climate forum to assert itself more forcefully. But Zhang Haibin, a Peking University expert in climate negotiations, said Beijing was taking a “wait-and-see attitude” towards Trump’s climate policies.

The academic said that Xie Zhenhua, China’s chief climate change negotiator, had indicated to him that the Chinese government believed Washington had “not yet formed a clear global policy on climate change”.

Zhang said he saw only a 40% chance that Trump would follow through on threats to abandon the Paris agreement. “I think the greater likelihood is that Trump will end up not pulling out of the pact but instead adopting a passive approach towards it [and] meeting none of its commitments. I call it a ‘semi-withdrawal,” he said.

However, Zhang warned that even that kind of reversal would deal a heavy blow to international efforts to tackle climate change. He predicted that Trump’s lack of interest in the issue would create “a vacuum of a global leadership” that would make it harder to reduce global emissions and finance mechanisms such as the Green Climate Fund.

Many activists have called on China, the world’s largest emitter, to step up as the global climate champion. Chinese president Xi Jinping appeared to seize that mantle just days before Trump’s inauguration, using a speech in Geneva to urge the US not to derail the Paris agreement and warn: “There is only one earth in the universe and we mankind have only one homeland.”

However, Zhang rejected the idea that his country was pushing to become the world’s climate leader. “I think there are two key words to describe China’s leadership role in combating climate change: one is ‘stabilizer’ and the other is ‘coordinator’,” he said.

“China should be a climate stabilizer because Trump is someone who is quite uncertain. China should stabilize the existing international order and its norms. And China has the ability to connect and integrate all involved parties in order to build a united global front to combat climate change.”

Environmentalists hope to slow Trump’s ambitions by using legal action to entangle attempts to scrap the Clean Power Plan and rewrite other pollution standards. But those who helped negotiate the previous US position on climate change fear momentum will be lost at a crucial juncture in the effort to avoid dangerous warming.

“The Trump people can slow-walk things, and a delay of three of five years is significant because with climate change we can’t sit and twiddle our thumbs for too much longer,” said Nathan Hultman, who worked on climate policy at the White House during Obama’s presidency.

“Paris is a robust agreement but other countries looking at us and saying ‘why should we do anything then?’ is a risk. We are seeing some shift in leadership but many countries are hoping this a short withdrawal. This problem isn’t going away.”

Hultman, who has attended international climate talks for more than 20 years as a negotiator or observer, said Trump’s administration is “far more unpredictable” than that of Bush, which withdrew the US from the Kyoto climate agreement.

“Unlike the George W Bush administration, there’s now no clear core ideology or advising strategy as to how decisions are made,” he said. “There was some pragmatism under Bush. So far Trump has been a bull in a china shop.”