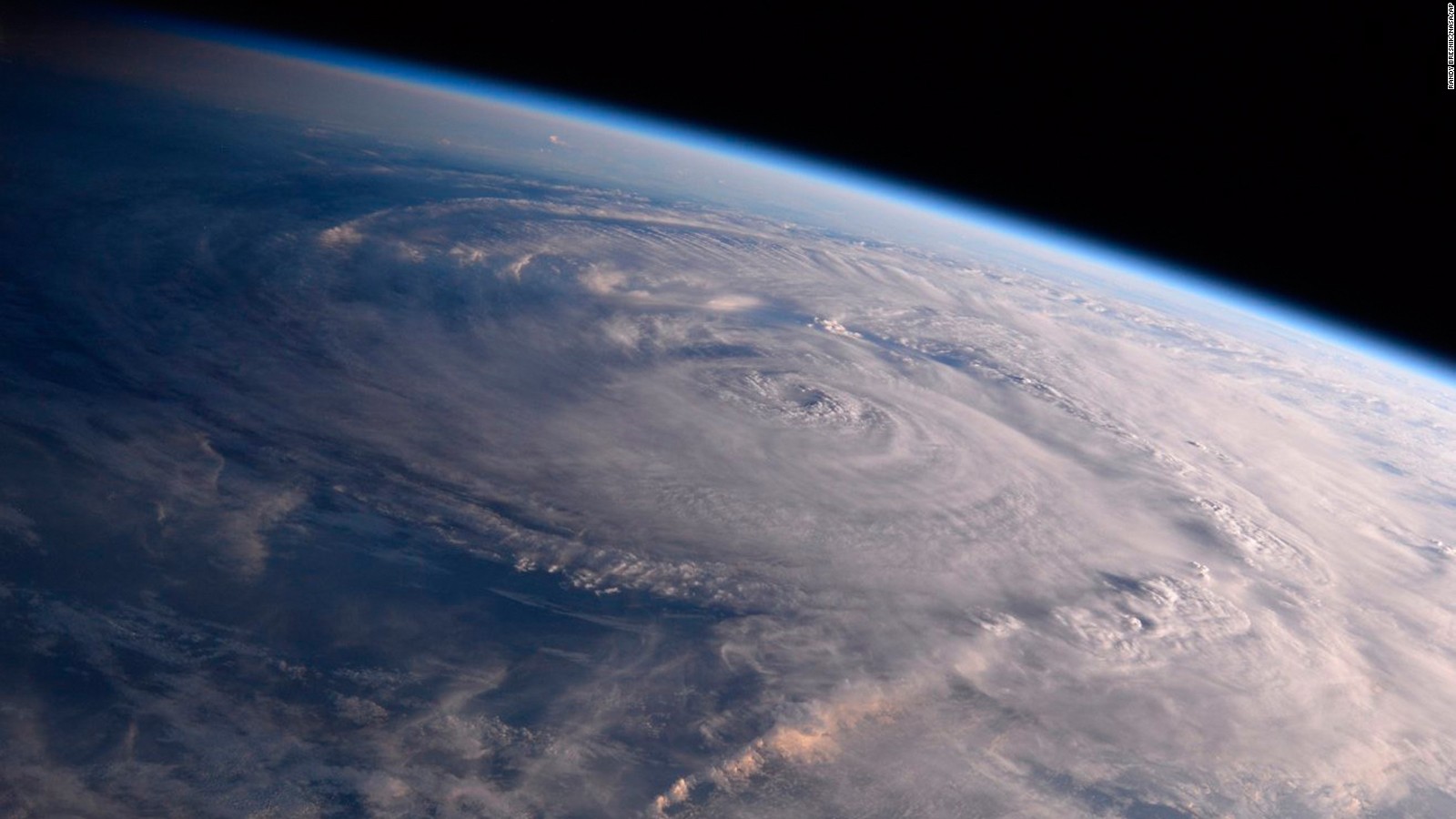 FILE - This photo made available by NASA shows Hurricane Harvey over Texas on Saturday, Aug. 26, 2017, seen from the International Space Station. Experts say a combination of unusual factors turned Harvey into a deadly monster. The storm intensified just before it hit land, parked itself over one unfortunate area and dumped a record amount of rain. (Randy Bresnik/NASA via AP)

It might seem premature when people in the Caribbean, Florida and Texas are still mucking out their flooded homes.
And no, changes in our planet's atmosphere did not cause Hurricanes Harvey or Irma. But the consensus among scientists is that the effects of climate change, such as rising sea levels and warmer oceans, made those storms far more destructive than they would have been in previous decades.
"The short version is, climate change makes these very bad storms worse," said Sean Sublette, a meteorologist with Climate Central, a nonprofit group that studies climate change. "It's not the approximate cause of the storm, but it makes these bad storms worse. And in the case of a really bad storm, climate change can make it totally disastrous or catastrophic."
The data on how our warming planet specifically impacted Harvey and Irma won't be known for quite some time. It can take months and even years to collect and analyze that information.
But the science is this: Hurricanes thrive over warm water and strengthen in intensity; oceans have warmed on an average 1 to 3 degrees Fahrenheit over the past century, and sea levels have risen about 7 inches during that time. Throw in compound flooding -- the combination of rising sea levels from global warming, storm surge and extreme rainfall -- and you have the perfect mix for record flooding.
We saw this in greater Houston from Harvey and along the 240-mile stretch of the Atlantic coast from Jacksonville, Florida, to Charleston, South Carolina as a result of Irma's storm surge and heavy rains.
Both storms were massive in scope. Harvey dumped a record 51 inches of rainfall as it sat over Texas and Louisiana, saturating the region with 27 trillion gallons of water in six days. Irma was the strongest Atlantic-basin hurricane ever recorded outside the Gulf of Mexico and the Caribbean Sea, spending three days as a Category 5 hurricane, the longest Category 5 on record. Irma maintained winds of 185 mph or above for a total of 37 hours, the most ever for a storm.
"If this isn't climate change," Miami Mayor Tomás Regalado said as Irma bore down on Florida, "I don't know what is." 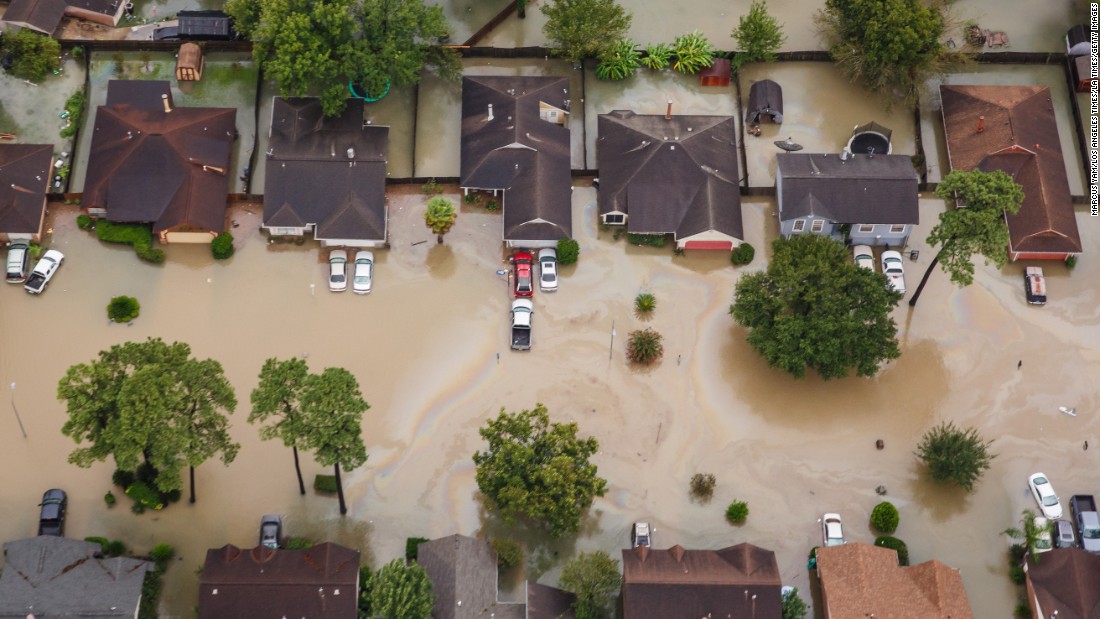 Neighborhoods near Interstate 10 in Houston sit in floodwaters in the wake of Hurricane Harvey.

'This brings it home'

Last week, Scott Pruitt, head of the Environmental Protection Agency, said it would be "insensitive" to talk about global warming as Irma took aim at Florida.
Other administration officials also refused to address the matter. When asked Thursday whether the recent hurricanes had changed his views on climate change, President Trump said, "we've had bigger storms than this" -- contradicting the hyperbolic language he had used to describe Irma days earlier as it neared Florida. In the past, Trump has said climate change is a hoax.
But scientists said that talking climate change amid major storms is in their DNA.
In August 2016, prolonged rainfall caused catastrophic and deadly flooding across southeastern Louisiana. A team of scientists studied the storm and determined within weeks that climate change had made it at least 40% more likely to occur.
But the National Oceanic and Atmospheric Administration last month called it "premature" to conclude that human activities have had a detectable impact on Atlantic hurricane activity, although it added that global warming by the end of the century will probably make tropical storms more intense.
Katharine Hayhoe, director of the Climate Science Center at Texas Tech University, agreed that now is not the time to lecture hard-hit Florida and Texas residents about hurricane preparedness or how their energy consumption might impact the planet. But "now is absolutely the time to be having this conversation" about climate change's real-time effects, she said.
"The most dangerous myth that we have bought into as a society is not the myth that climate isn't changing or that humans aren't responsible," she said. "It's the myth that 'It doesn't matter to me.' And that's why this is absolutely the time to be talking about the way climate change amplifies or exacerbates these natural events. This brings it home." Kelly McClenthen returns to her flooded home with boyfriend Daniel Harrison in the aftermath of Hurricane Irma in Bonita Springs, Florida.
Sublette and Hayhoe said they are all too familiar with the arguments of climate-change deniers. People point to images of devastating hurricanes from the early 1900s as examples of how extreme weather has always been part of coastal living. Or they say things like, "You can't even get a weekly forecast correct, let alone predict stuff happening decades from now."
But Hayhoe said people shouldn't cherry-pick scientific facts or think that their beliefs somehow trump reality.
"You can say you don't believe in gravity, but if you step off a cliff, you're going down," she said.

Hayhoe and other climate scientists say it's important to emphasize their belief that climate change didn't cause Harvey and Irma.
"No scientist ever said that," Hayhoe said. "What you will find is that we're basically saying the same thing, which is that climate change exacerbates those risks" posed by the storms.
For example, Tropical Storm Allison dumped more than 30 inches of rain over Texas in 2001, causing widespread flooding around Houston. But Harvey was an even bigger storm, fueled by warmer waters, than was Allison. As a result, it dumped more than 50 inches of rain on the region, causing massive flooding stretching more than 150 miles from Houston to Lake Charles, Louisiana.
"Are Irma and Harvey affected by climate change? Absolutely," said CNN senior meteorologist Brandon Miller, who has studied global warming for more than a decade.
"But everything in the atmosphere now is impacted by the fact that it's warmer than it's ever been," Miller said. "There's more water vapor in the atmosphere. The ocean is warmer. And all of that really only pushes the impact in one direction, and that is worse: higher surge in storms, higher rainfall in storms."
Video: Wrath of Hurricane Irma on the Caribbean
The intensity, frequency and duration of North Atlantic hurricanes have increased since the early 1980s, according to the most recent National Climate Assessment, a periodic report by a team of more than 300 scientists and other experts. The 2014 report also found that the frequency of the strongest storms -- Category 4 and 5 hurricanes -- has increased in recent decades.
But other scientists say the evidence is less conclusive. 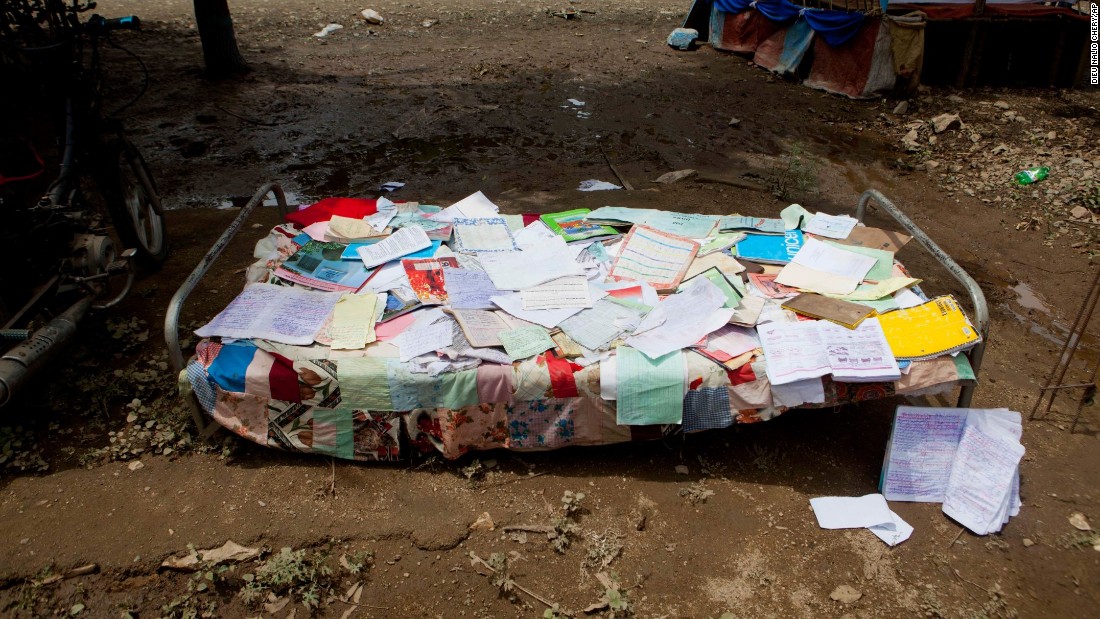 Personal papers and notebooks recovered from a flooded home are spread out on a cot in the aftermath of Hurricane Irma in Fort-Liberté, Haiti.
"The historical Atlantic hurricane record does not provide compelling evidence for a substantial greenhouse warming-induced long-term increase (in storms)," said Ryan Maue, a research meteorologist at the Cato Institute, a libertarian think tank.
In the future, most scientists say, there won't necessarily be more hurricanes -- just the potential for more hurricane-related flooding and destruction.
"More than 90% of the people doing the research are in very good agreement about what's going on," Sublette said. "As we go forward in time, there's going to be a tendency for the hurricanes that do form to have heavier rain and, perhaps, stronger winds."
Asked whether it's appropriate to talk about climate change while hurricane victims are suffering, Sublette said, "The public wants to know, the public has the right to know, and the public wants answers. I think it's up to us to give the most scientifically accurate information possible."
Hayhoe added, "You can say, 'I don't believe in climate change,' but the planet is warming, humans are responsible, and the risks are becoming increasingly serious and even dangerous."

What Hurricane Harvey left behind

Irma's destructive path through the Caribbean

Widespread destruction in the Florida Keys

What Hurricane Harvey left behind

Irma's destructive path through the Caribbean