'THE TIME HAS NEVER BEEN MORE URGENT': AT THE WORLD'S LARGEST EARTH SCIENCE EVENT... 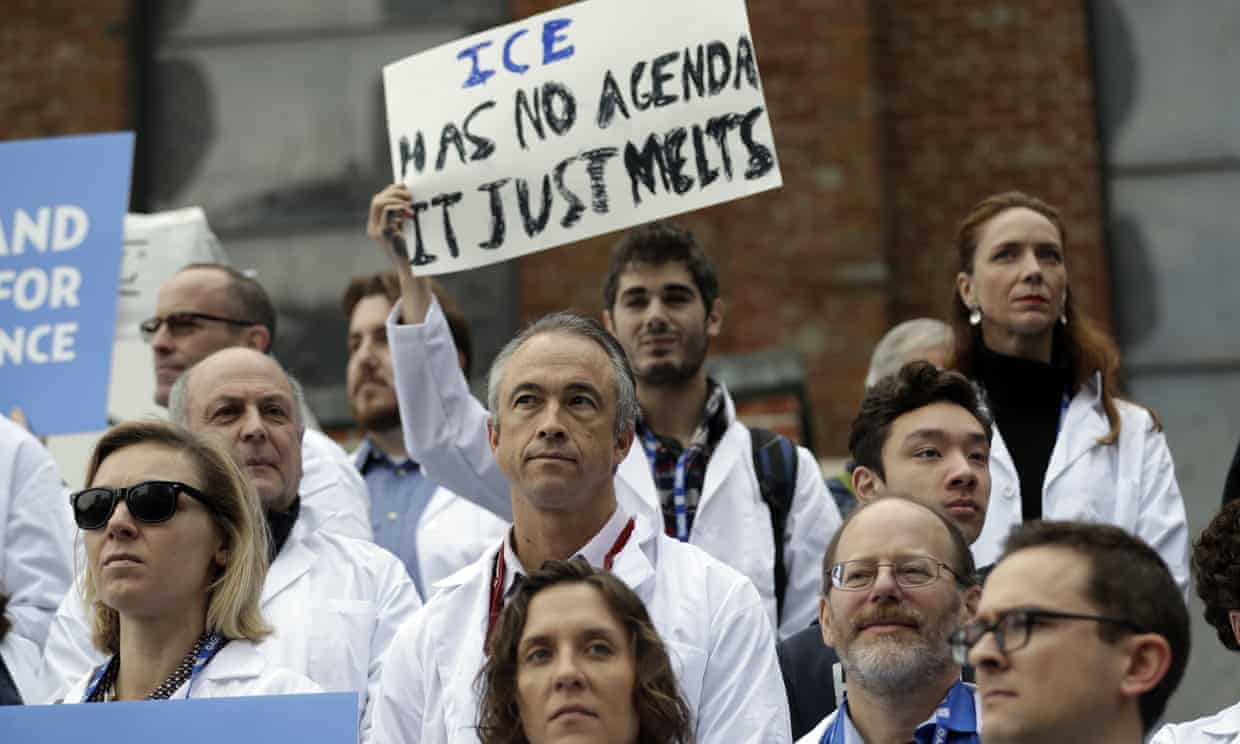 With Trump set to have a ‘chilling effect’ on environmental policy, 20,000 Earth and space scientists met in California to face up to a new responsibility...

They argued about moon-plasma interactions, joked about polar bears, and waxed nostalgic for sturdy sea ice.

But few of the 20,000 Earth and climate scientists meeting in San Francisco this week had much to say about the president-elect, Donald Trump – though his incoming administration loomed over much of the conference. 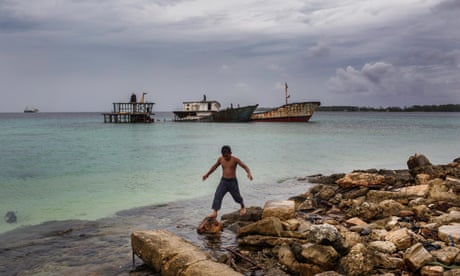 Lives in the balance: climate change and the Marshall Islands...

For some, the annual meeting of the American Geophysical Union (AGU) – the largest Earth and space science gathering in the world – was a call to action. California’s governor, Jerry Brown, addressed the scientists on Wednesday morning, telling them, “the time has never been more urgent or your work ever more important. The danger is definitely rising.”

Citing financial inequality, the risks of nuclear arms and the mounting effects of climate change, Brown said, “we’re facing far more than one or two or even thousands of politicians.

“We’re facing big oil, we’re facing big financial structures that are at odds with the survivability of our world. It’s up to you as truth tellers, truth seekers, to mobilize all your efforts to fight back.”

Brown compared the struggle to the campaigns waged by the tobacco industry, noting that health science and the law eventually curtailed its power. “Some people need a heart attack to stop smoking,” he said. “Maybe we just got our heart attack.” 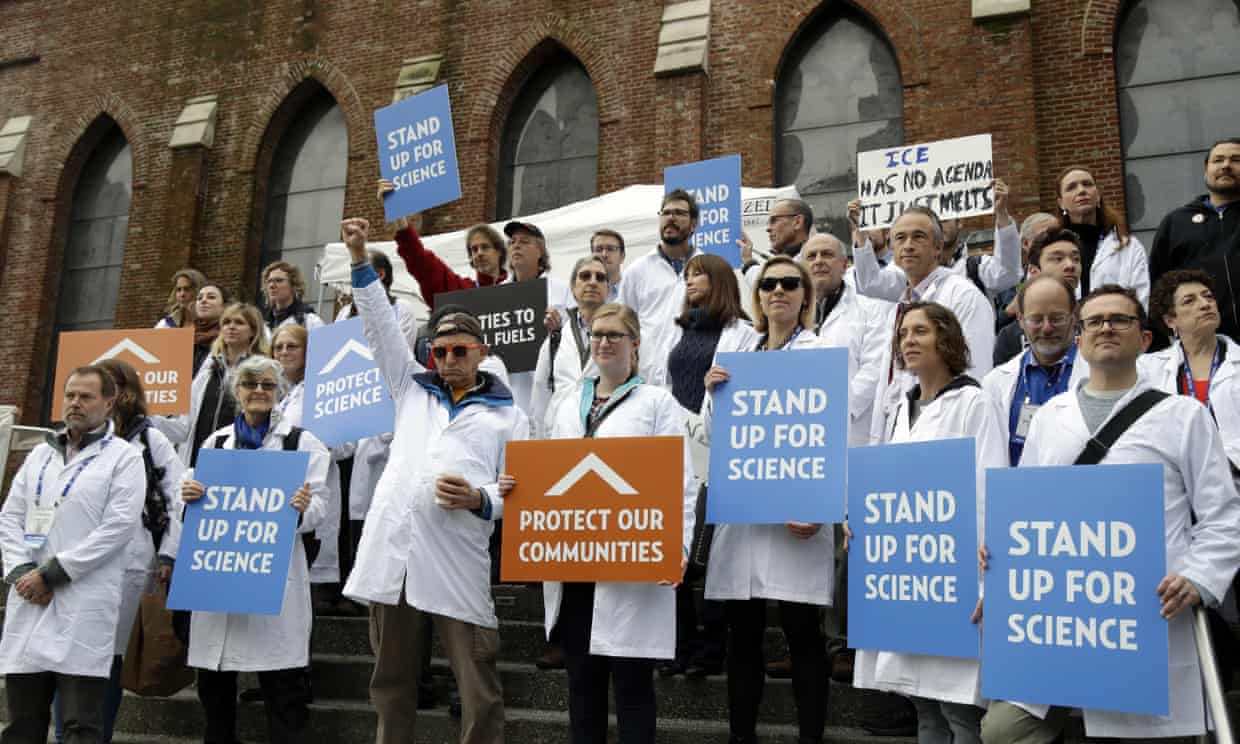 “This is not a battle of one day or one election,” he added, calling scientists “foot soldiers” for truth. The governor promised to help lead the campaign, daring Trump to shut down climate science satellites and mocking Rick Perry, his pick for secretary of energy.

“If Trump turns off the satellites, California will launch it’s own damn satellites,” Brown said. “Rick, I’ve got some news for you: California’s growing a hell of a lot faster than Texas. And we’ve got more sun than you’ve got oil.”

Not far away, a team of lawyers with the Climate Science Legal Defense Fund met with scientists to discuss the threats ahead. The group helps defend scientists from harassment and suits over climate change research, most prominently a case brought by a climate change-denying organization to obtain emails and research of scientist Michael Mann.

At the AGU table, attorneys handed out guides to “handling political harassment and legal intimidation”.

Some scientists are taking action on their own, including Eric Holthaus, a meteorologist who has started one of several “guerrilla archiving” efforts to preserve public climate data on non-government servers. Holthaus and others fear that a Trump administration could take down the data, as former Canadian prime minister Stephen Harper tried to silence scientists.

Sally Jewell, the outgoing secretary of the interior, tried to reassure scientists that the Trump administration could not quickly gut federal research. Science would be “foundational” to government, she told attendees: “We have a president-elect that likes to win, and we can’t win without science.”

Jewell argued that scientists should stress the benefits of science to industry, saying they should start speaking “in the language of business, perhaps, to translate” for the Trump administration.

Many federal researchers had already begun to speak in those terms. Scott Hagen, presenting on the dangers of rising tides to Louisiana, said the state could face losses of up to $280m in agricultural lands. Jennifer Francis, a Rutgers professor, said the extreme heat in the Arctic would almost certainly contribute to extreme weather around the world next year. Marco Tedesco, presenting on the “Arctic report card 2016” – a year of record lows – noted that changes in snowfall patterns would affect hydropower and freshwater resources.

“Snow melting sooner and faster is leaving a drier soil exposed to a drier summer,” he said. “You might have more drought, might have more forest fires, ramifications for economy, population.”

Thomas Zurbuchen, the head of Nasa’s science mission directorate, stressed that scientists should “behave like scientists” and “focus on the data that we get and not amplify the noise”.

He too drew a link between science and business: “What you’re carrying around in your pocket is a lot of space data that’s doing work for you.” 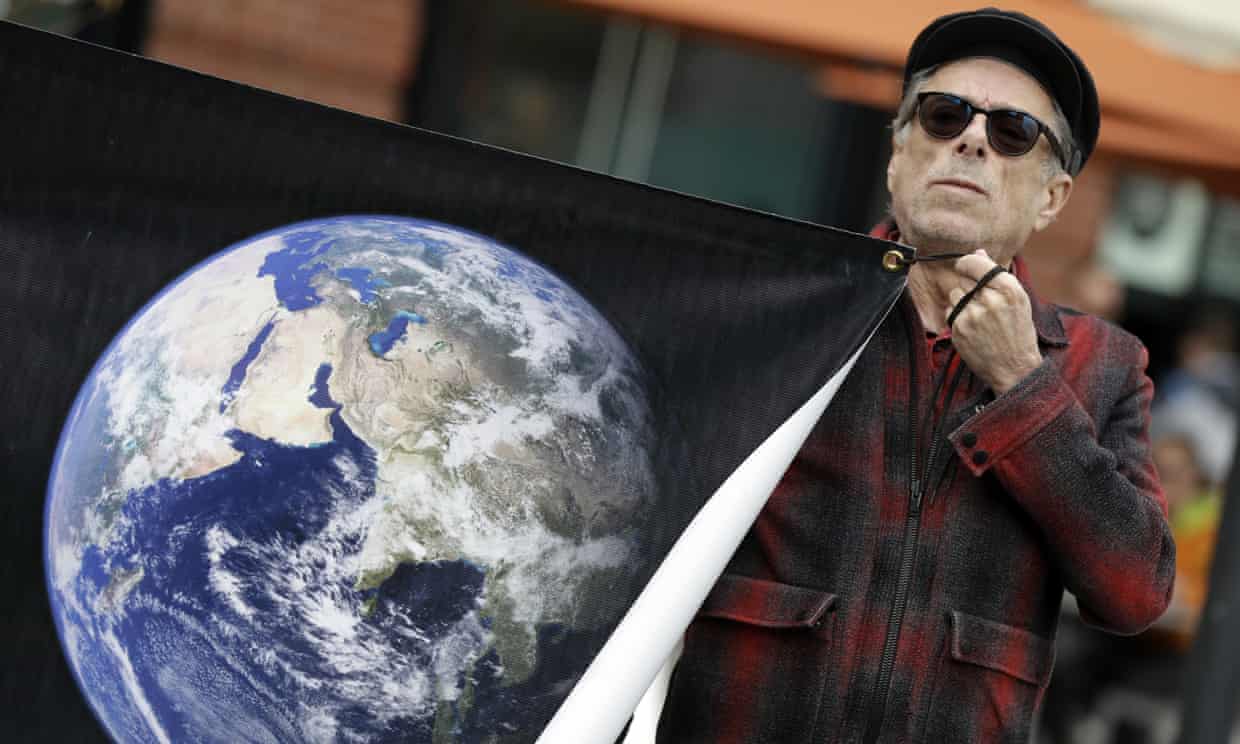 At the meeting, scientists were feeling the pressure of a looming Trump administration. Photograph: Marcio Jose Sanchez/AP

Jewell urged scientists to “speak up for scientific integrity”, and tried to assure them that pro-science policies “are not going to be easy to undo”. But uncertainty and anxiety reigned, for the future of research and the planet.

“Trump’s leadership will have a chilling effect on environmental and science policy no matter what,” said one climate scientist, who asked for anonymity for fear of work being politicized. “What worries me most is that this administration might launch a fundamental attack on the scientific process.”

The best-case scenario, the scientist said, would resemble the Bush administration, in which “leadership doesn’t care much about what the climate scientists say, but they continue to support funding for research”. A worst-case scenario would be “an effort to undermine the scientific infrastructure of the country”.

Agencies could radically restructure their staff, for instance, shuffling scientists to unappealing projects while Republicans in Congress slash budgets and Trump reneges on world climate talks. Charles Kennel, a former Nasa official, said that the US’s withdrawal for several years would be “serious but not fatal”.

Other scientists stressed that the world is already changing in dramatic, unpredictable ways. Donald Perovich, a professor at Dartmouth University, said that the Arctic in 2016 looked “as though part of the United States has melted”, a region comparable to all the states east of the Mississippi plus the midwest and North Dakota.

When the researchers began doing a yearly report card in the mid-2000s, Perovich said, “you kind of had to listen closely, because the Arctic was whispering change.”