Click here first to read the ten most critical climate change facts as of 2.2.2023.

If you are curious after reading the above link, learn more about why 60+ years of fossil fuel reduction efforts have failed below?

In spite of 60+ years of warnings by credible scientists and the work of the environmental movement, plus a preponderance of collaborating scientific evidence, as well as numerous conferences and previous treaties, the carbon dioxide and methane pollution of our atmosphere, has not stopped, slowed, or even leveled off. On the contrary, it is getting worse faster than ever before! 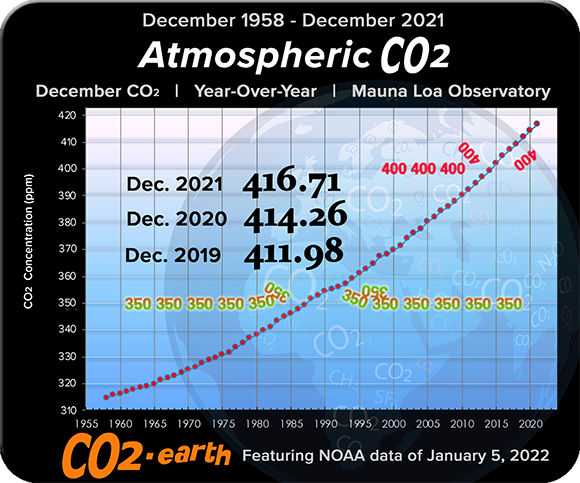 As you can see, we are not doing very well.

Leading climate scientists like James Hansen, who originally warned us about the global warming danger 40 years ago, say we would remain safe if carbon in the atmosphere did not go over 350 parts per million (ppm). As of July 2021 we are at about carbon 420 ppm and increasing at about 3 ppm per year in a near exponential progression.

When you combine the heating effect of carbon with the other greenhouse gases, it is called the CO2e ppm rating. CO2e, or carbon dioxide equivalent. CO2e is a standard unit for measuring all greenhouse gases in terms of the amount of warming they create compared to CO2.carbon footprints.

As you can see below, carbon has been rising since the beginning of the Industrial Revolution in England. 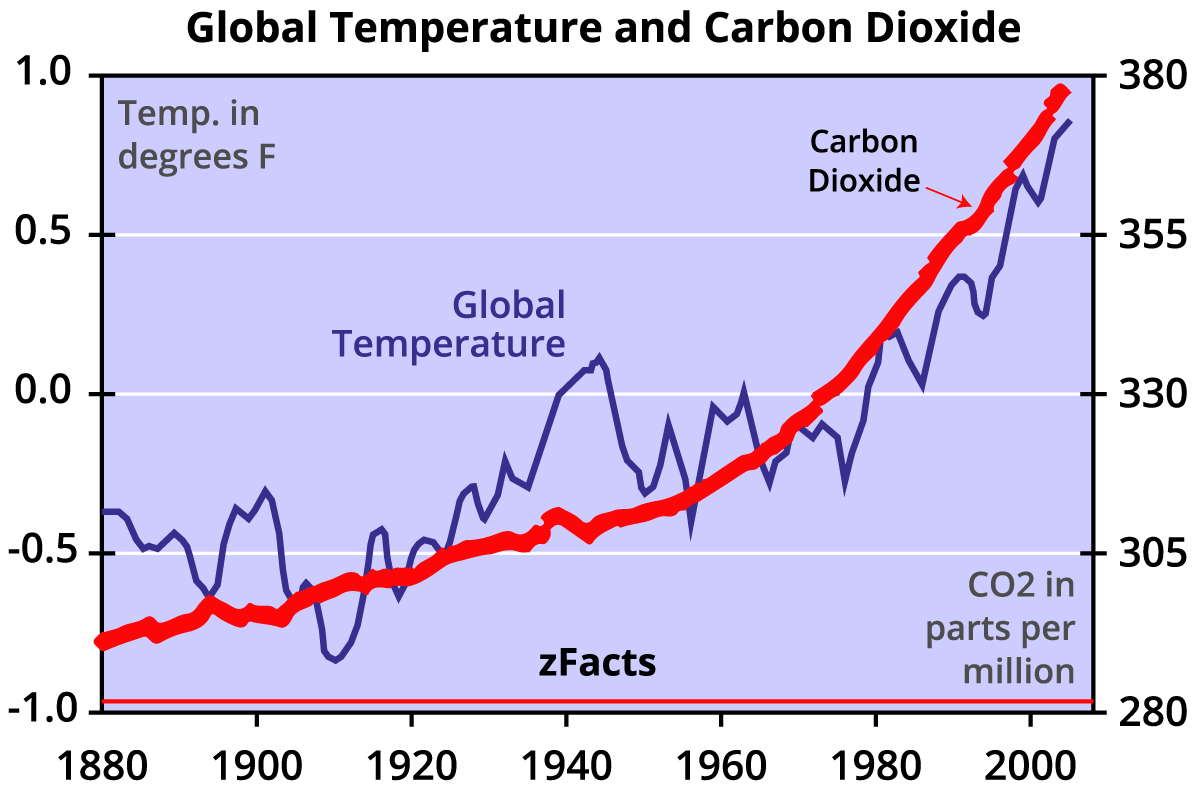 Image via Stephen Stoft at zfacts.com

According to James Hansen, a carbon 450 ppm level would eventually correspond and develop into an average global temperature increase of 6° Celsius (10.8° Fahrenheit) in this century and the end of human civilization as we’ve come to know it. Based on carbon ppm levels already in the system and reaching the 450 mark, this also means at least another 2.7° Celsius (4.9° Fahrenheit) global temperature increase beyond where we are now is the eventual and inescapable future reality.

This 2.7° Celsius would also be the most realistic minimal temperature increase to project as part of any future planning over the next 10-30 years. Bear in mind that even this scenario applies only if everything goes perfectly and we cross no additional global warming tipping points.

Hansen’s projections for “ending human civilization as we know it” is not the same as mass human extinction (most of humanity dying by mid-century,) as we approach carbon 500 ppm and carbon 600 ppm which turn into the 5° or 6° Celsius (10.8° to about 12° Fahrenheit) temperature levels. In Hansen’s 6° Celsius rise coming from eventually crossing the carbon 450 ppm mark, what would be considered normal, stable, comfortable, or predictable daily life in developed nations will become severely impaired and dysfunctional, to say the least.

In undeveloped nations, there will be a high and consistent level of chaos and breakdown that will rapidly render most of these nations politically and economically unsustainable. As it is already occurring, the chaos of existing less-developed nations destabilized by factors such as war and the global warming extinction emergency will then affect the more developed and stable nations far beyond just the current massive migrations of climagees escaping the suffering and heat.

In spite of all the media PR, 21 United Nations climate conferences, endless warnings from credible scientists over the last 30 + years, and national reduction pledges and treaties, things are worsening in a nearly exponential progression (2,4,8,16, etc.). There is no way to deny we are not only losing the escalating global warming battle, and we are losing it at a progressively faster rate!

Instead of enacting the needed changes when they were far easier, more gradual, and far less costly, we must now take radical, painful, and costly tough medicine if we are going to save the future. The changes that would have been merely inconvenient 35 years ago will now become nearly unbearable.

Our decades long inability to control the climate change and global warming emergency is due in part to:

But, if everyone on the planet and every government simultaneously agreed to scale up green energy generation immediately and there were no budgetary or resource restrictions in completing this life-critical project, it would still take many many decades to put that infrastructure in place.

If escalating global warming and its consequent climate destabilization proceed to the levels currently being predicted, it will eventually cost the global society hundreds of trillions of dollars in crisis recovery, as well as soaring insurance rates, massive real estate losses and depreciation, and massive coastal and other infrastructure losses, in addition to the vast amount of human suffering and death.

Right now, most nations are struggling with debt and their economies are in trouble with anemic annual growth. How will many of these nations, particularly the weakest ones, remain politically or financially viable, stable, or even continue to exist if another 5% or more of their total GDP (the Stern Review) is drained off each year into the continually escalating costs of global warming-caused climate destabilization? Current estimates from a book called Climate Shock project all global warming consequences will cost 10 percent and probably far more of the world’s total GDP by 2050.

The global warming extinction emergency is already here! Its superstorms, flooding, seasonal disruptions, wildfires, heat waves, migrating insect infestations, and droughts will continue increasing in magnitude and frequency. According to a recent analysis from scientists at the National Center for Atmospheric Research (NCAR),  "[t]he worst-case projections for global warming may be the most likely.”

The next battle now lies in keeping global warming from rising to an extinction-level event where human-caused carbon dioxide and methane levels in the atmosphere push the global temperature increases to 4°-6° Celsius (7.2°-10.8° Fahrenheit) above preindustrial levels and beyond. How we can survive and fix this is found in the new Job One for Humanity Plan found on this website. 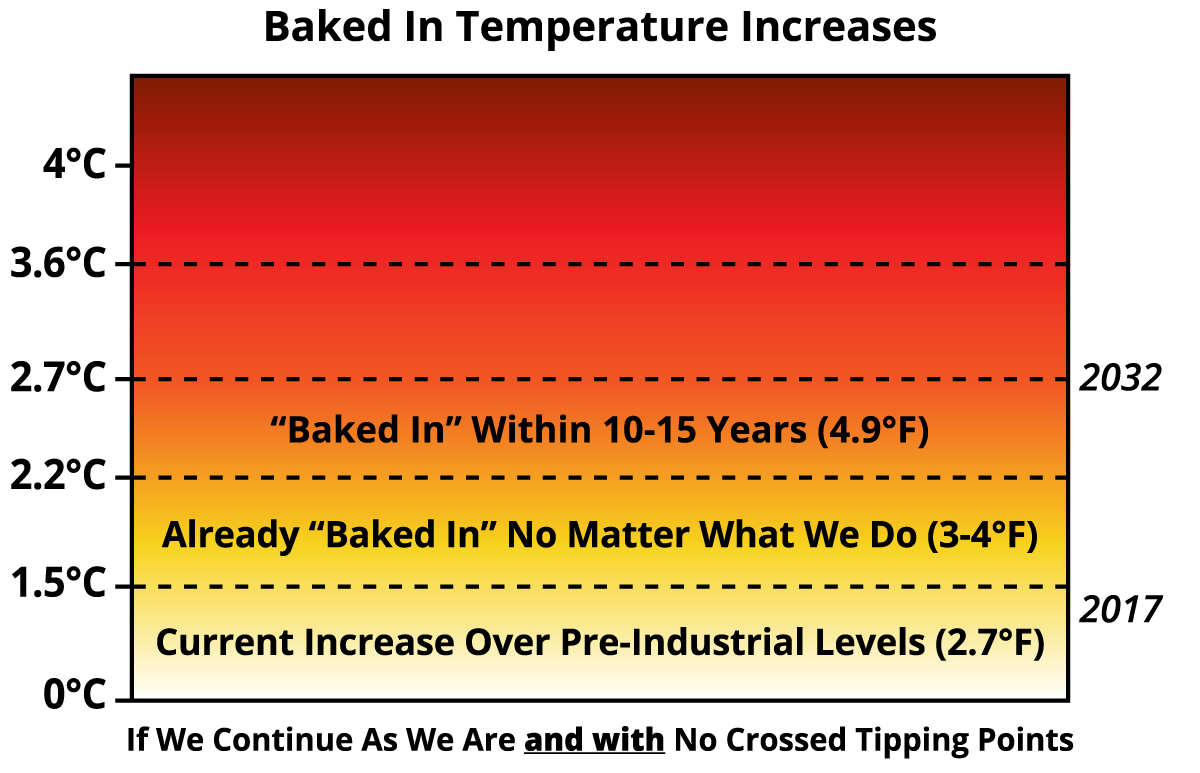 The following Illustration is From the new Climageddon book: 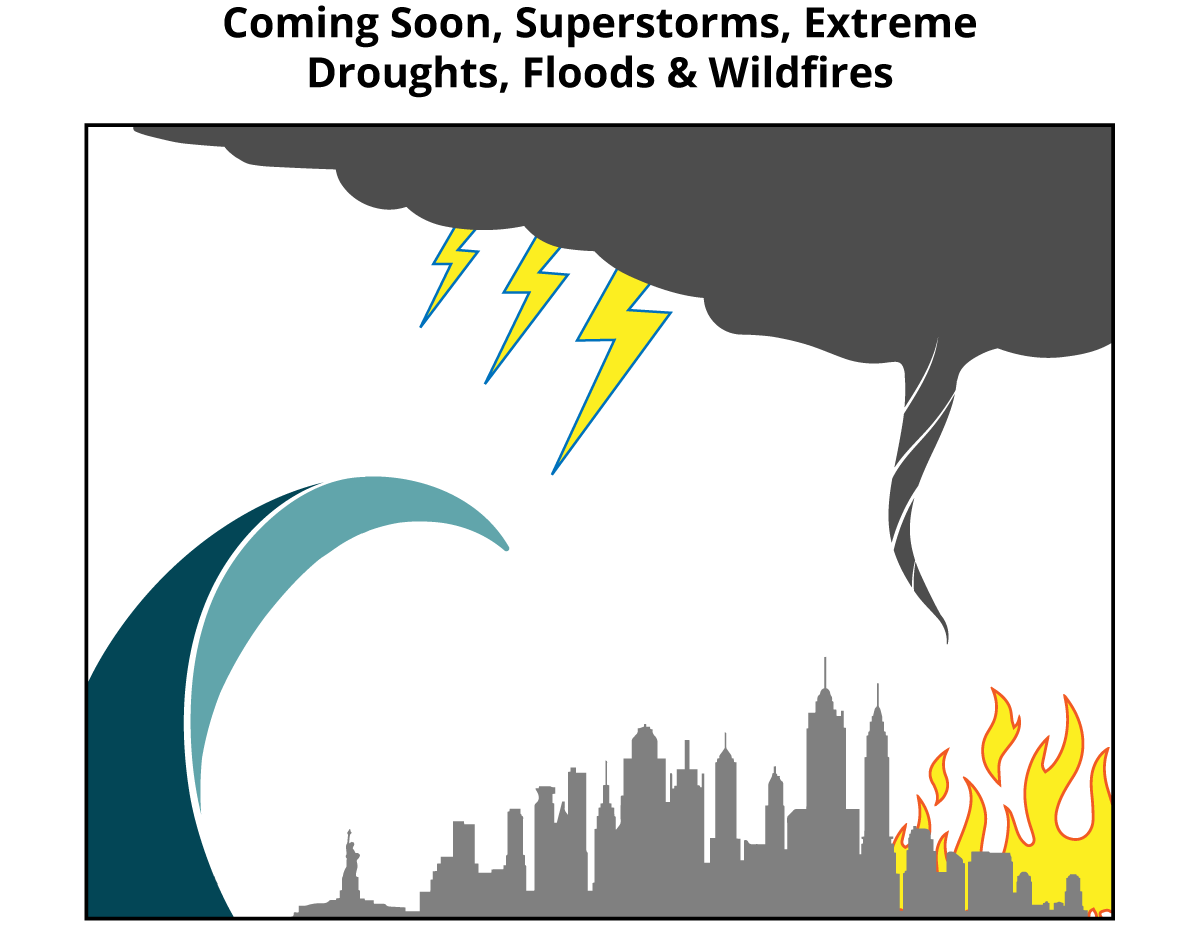 Now that you read the global warming emergency details provided above, it is critical to first read this critical new article which fully explains:

1. why we are already in an undeclared state of a global warming extinction emergency and,

Once you have read the above article, please click here for the good news of what you can do about this climate change and global warming extinction emergency!

Next, please click here first to read about why mass die-offs and a climageddon-type global warming mass extinction event killing most of humanity by mid-century are a near-certainty within the next 30-50 years, but only if we miss the critical 2025 global fossil fuel reduction targets.

Click here for the full timeline and consequence details for this climageddon extinction scenario and countdown.

(Click here to discover why total human extinction is not realistic or probable and the worst humanity will experience is near-total extinction (50 to 90+% of humanity going extinct.)

There is also more information about the escalating global warming emergency in the new Climageddon book. In this new book, you will find out why anything at or above a 4°Celcius increase in average global temperature would be incompatible with an organized global society and would be beyond our ability to adapt to it!

Get your copy now! Your book purchase helps support the social benefit mission of Job One for Humanity to end global warming. Click here for more detailed information about this news.