AFTER REVENANT … LEONARDO DICAPRIO STARS AS ECO-WARRIOR IN CLIMATE BATTLE... 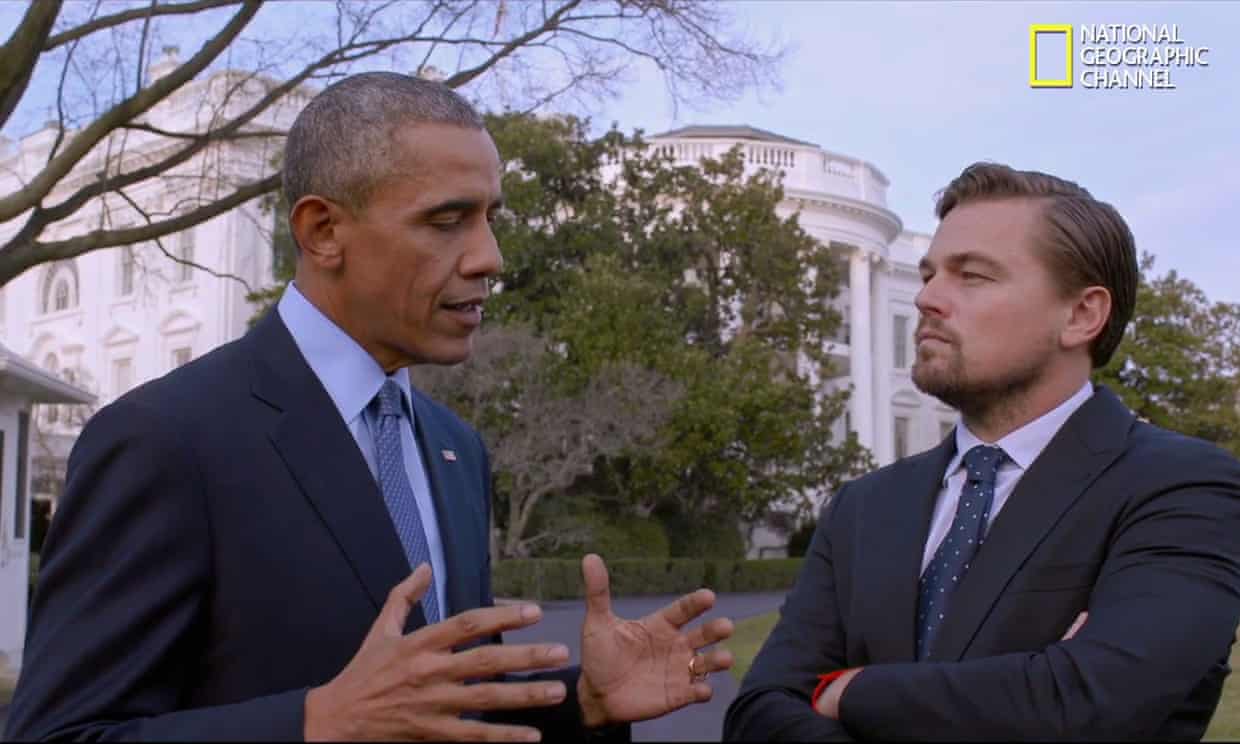 Leonardo DiCaprio and President Obama in a scene from Before the Flood. Photograph: Zero Media

Obama and the pope feature in documentary, Before the Flood, that hopes to influence presidential election...

e struggled through the frozen wastes of North America in his Oscar-winning performance in The Revenant. Now Leonardo DiCaprio is starring in a different role – taking his powerful new eco-documentary to the White House, in the hope it can help restart President Obama’s battle against global warming.

It’s an issue of importance to both men. Obama, who appears in the documentary, Before the Flood, is using the last days of his presidency to make environmental protection a central pillar of his legacy. Last month he created the world’s largest ecologically protected area when he expanded Papahānaumokuākea, a marine reserve in his native Hawaii, to encompass more than half a million square miles. He also gave “marine national monument” status to 4,913 sq miles off the New England coast.

Two years ago, DiCaprio – who has raised money for protecting tigers, orangutans and elephants – was designated a UN messenger of peace, with a special focus on climate change.

The White House screening of Before the Flood, which follows DiCaprio as he travels to parts of the world including Greenland, the Pacific islands, Sumatra and industrial regions of China, precedes a global release via National Geographic later this month. DiCaprio and the film’s director, Fisher Stevens, hope to use it in the run-up to next month’s US presidential and Senate elections. They plan to show the film on college campuses and across swing states, including Florida, where Senator Marco Rubio is up for re-election.

“Rubio is a climate change denier, and we want to get these deniers out of Congress, to make them understand the Paris [climate] accords are important and that we need to do more,” Stevens said. The film-makers claim 38 US senators accept money from the energy industry, in effect blocking the passage of environmental legislation.

“These people are not necessarily climate deniers. They’re just in the pockets of the energy industry, even though that’s at the expense of all of us,” said Fisher. “And [Republican presidential candidate] Donald Trump has said he’s going to try to kill the Paris accords if elected.”

Last month DiCaprio told the audience after the film’s world premiere at the Toronto international film festival: “We cannot afford, at this critical moment in time, to have leaders in office that do not believe in the modern science of climate change.”

Before the Flood’s release comes as statistics relating to the health of the planet worsen. Last week the Scripps Institution of Oceanography announced it was safe to conclude that global CO2 levels will not drop below 400 parts per million this year – “or ever again for the indefinite future”. The figure is seen as the point at which global warming becomes irreversible.

The Observer view on global warming

DiCaprio and Stevens came up with the idea to make the documentary while in the Galápagos islands with the oceanographer Sylvia Earle. “We were frustrated with our government, and I felt if the media isn’t getting to the population about climate change, maybe Leonardo can,” said Stevens. “So the message is, it’s up to all of us. It’s a simplistic message but it really is.”

Despite the intransigence of US legislators, Obama is using his last months in office to establish his legacy as the most environmentally effective president since Theodore Roosevelt created national parks. In Obama’s reading of the issue, climate change is as much a national security issue as an environmental one.

He tells the film-makers: “In addition to the sadness I’d feel if my kids can never see a glacier the way I did in Alaska, even if you were unsentimental about that, you’ve got to be worried about national security and the capacity of the world order to survive the kinds of strains climate scientists are predicting.”

Sixty-one countries, including China and the US, representing about 48% of global emissions, have adopted the Paris accords. Countries representing at least 55% of emissions have to adopt the accords for them to be ratified.

The film-makers visit Pope Francis in the Vatican, Obama in Washington, political leaders in the Pacific islands of Vanuatu and Kiribati, climate scientists in Greenland and the Indian conservationist Sunita Narain, who explains to DiCaprio that access to energy is as much an issue as climate change for 300 million Indians.

“I’m sorry to say this to you, as an American, but your consumption is really going to put a hole in the planet,” Narain tells DiCaprio. “We need to put the issue of lifestyle and consumption at the centre of climate negotiations. ”

DiCaprio responds that it’s difficult to present to Americans the argument that they need to change their lifestyle. “I would also argue that it’s probably not going to happen,” he says. If the climate crisis is to be solved, it will be because “renewables will become cheaper the more we invest into them, and that will solve the problem”. But Narain shakes her head.

The film-makers have enlisteded Trent Reznor and Atticus Ross, the pair behind the The Girl with the Dragon Tattoo, for the soundtrack. They use Hieronymus Bosch’s triptych The Garden of Earthly Delights – which made a strong impression on the young DiCaprio – to frame the progress of humankind’s impact on the planet, from innocence to Bosch’s final panel of darkness and ruin.

How far off are we now, they wonder? “What haunts me is the last panel, with the planet in ruins, charred and blackened skies,” DiCaprio muses. “If this was a movie we could write our way out of this mess, but real life isn’t a movie and we can’t pretend we know how this is going to end.”

He adds: “What we can do is control what we do next, how we live our lives, what we consume – and how we vote, to let our leaders know that we know the truth.”

One passage of the documentary takes place during the filming of The Revenant, when director Alejandro González Iñárritu was forced to move production 9,000 miles from a snow-free Canadian location to Argentina in search of a snowy landscape.