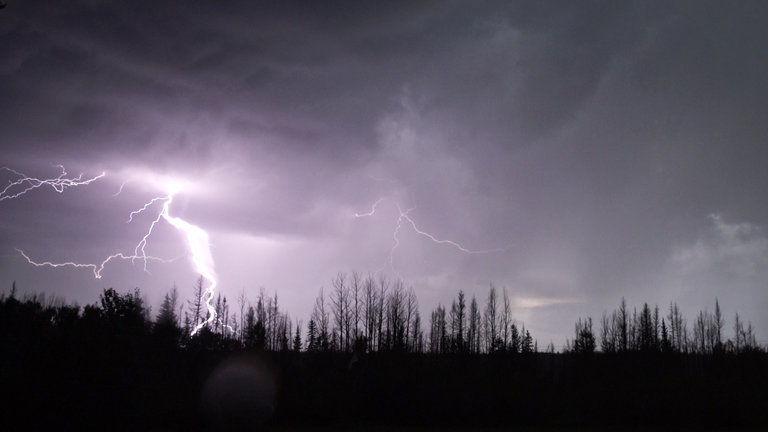 A lightning storm in Utikuma Lake, Alberta, in June. The area was burned from the 2011 wildfire. After each fire, peat moss grows and accumulates carbon, building a new layer on top of the previous one. Credit: Ed Ou for The New York Times

RED EARTH CREEK, Alberta — Kristyn Housman grabbed the end of a sampling auger, a steel tube that two colleagues had just drilled into a moss-covered hummock in a peat bog, and poked through a damp, fibrous plug of partly decomposed peat...

Peat has been building up for centuries in this bog, where the spongy moss is interspersed with black spruces and, on a late spring morning, the air is teeming with mosquitoes. The sample, taken from three feet down, is at least several hundred years old, said Ms. Housman, a graduate researcher at McMaster University in Hamilton, Ontario.

“There’s literally tons of carbon here,” she said, looking around the bog, which covers several acres off a muddy oil-company road amid the vast flatness of northern Alberta.

In discussions of how nature regulates carbon dioxide in the atmosphere, forests receive most of the attention for their ability to absorb and store carbon. But peatlands play an important role, too.

There are an estimated 1.6 million square miles of peatlands, or about 3 percent of the earth’s land surface, mostly in northern latitudes in Canada, Alaska, Europe and Russia.

Peat is made up of sphagnum and other mosses, which hold a large amount of water and contain compounds that inhibit decomposition. The peat slowly builds up over centuries because the annual growth exceeds the decay. 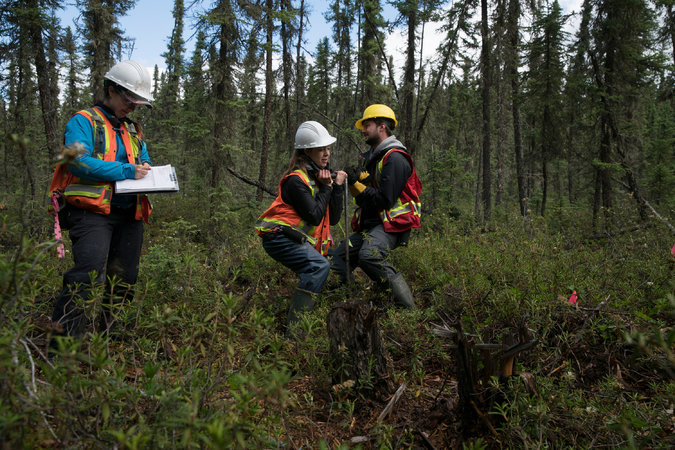 Students collecting a peat sample from the ground using an auger at the site of a recent prescribed burn in Red Earth Creek, Canada, on June 17, 2016. Credit Ed Ou for The New York Times

A relatively small amount of peat is mined to burn as fuel, to improve backyard gardens or to add smokiness to Scotch. But most of it stays where it is, and because it accumulates carbon over such a long time, it contains more carbon than is in the world’s vegetation, and nearly as much as the atmosphere does.

Like forests, peatlands are threatened by climate change. Warming temperatures can dry out bogs, making them more susceptible to fires, and to deeper, more intense burning. A peat fire, which can smolder like a cigarette for months, can release a lot of carbon.

“It’s carbon that has accumulated over several thousands of years,” said Mike Waddington, a McMaster professor who has been researching peat in Alberta and elsewhere for more than two decades. “If it were to be released, the global CO2 concentration would be much higher.”

The world has already had vast releases of carbon from peat, in Indonesia. Last year, bogs that had been drained for agriculture, and were drier because of El Niño-related warmth, burned for months, creating a haze visible from space and causing widespread health problems. At their peak in September and October, the fires released more carbon per day than was emitted by the European Union.

While few people foresee that level of disaster in northern peatlands, concern about fires is growing. A major worry is that as climate change and other disturbances affect peatlands, the intensity of fires will increase, releasing more carbon into the atmosphere.

“They take thousands of years to develop,” said Merritt Turetsky, a peat researcher at the University of Guelph in Ontario. “And in five minutes, a wildfire can blow through that area and release five to six hundred years of peat accumulation and change it forever.”

The enormous spring wildfire that destroyed much of Fort McMurray, a city of 90,000 people 150 miles east of here, burned bogs as well as trees. In June, the trees were no longer on fire outside the town, but crews were overturning peat with backhoes in an effort to extinguish smoldering hot spots. 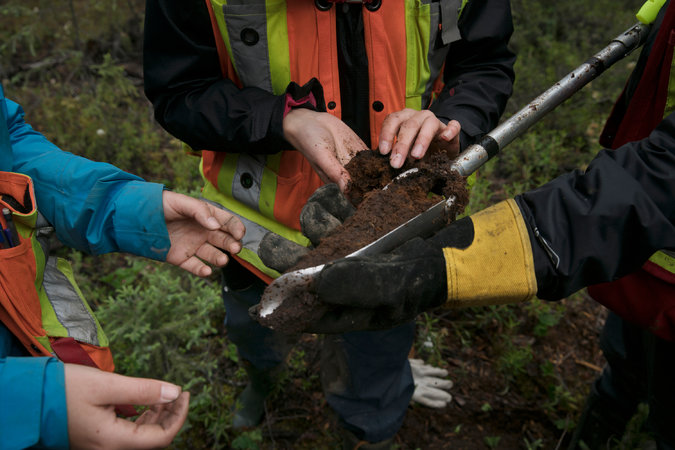 In a large wildfire in May 2011 that burned in and around the town of Slave Lake, about 80 miles south of here, some peat continued to burn through the winter, until spring rains and melting snow finally extinguished it.

Peat is generally resistant to burning, because sphagnum moss, which is dominant in a healthy bog, holds a lot of water. “If you have a large amount of this moss in a peatland, you aren’t going to get a very severe fire,” Dr. Waddington said. Typically only the top few inches of the peat will burn.

Warming, however, alters the system. Drier peat allows more oxygen to get to the roots of trees and other vegetation. This causes them to grow bigger, which means they use more water, further drying the peat.

As trees grow, they also provide more shade, which favors the growth of other mosses that, because they hold less moisture than sphagnum, are less fire resistant.

When the bog does catch fire, it may be more severe, with the combustion spreading deeper into the peat.

Other disturbances, like draining bogs to grow trees or to produce oil and gas, can also make a fire more severe. Dr. Waddington and others are doing research on how to restore bogs that have been drained, to reduce the risk of carbon loss through fires.

Normally a bog recovers slowly after a wildfire, with certain mosses and other vegetation taking over in stages until sphagnum mosses dominate. At the bog where Ms. Housman and her colleagues took samples, a section was deliberately burned last year. It is showing signs of recovery, with clumps of singed sphagnum moss already producing small shoots of regrowth.

But an intense fire, or a combination of other factors, can delay or even halt recovery.

That is the case at a small bog south of Red Earth Creek that researchers have nicknamed “Scorcho” because it was severely burned in the 2011 Slave Lake fire. As much as four feet of peat was consumed in some parts of the bog.

“All that peat, combusted and gone,” said Sophie Wilkinson, a McMaster doctoral student.

Five years later, the bog is showing few signs of returning to its old self. “It is definitely on the brink,” Ms. Wilkinson said. “There’s little to no sphagnum recovery, which is very worrying, because if it’s going to return to a carbon-accumulating system, which is what you would hope, really, it needs to get that sphagnum back.”

Scorcho may ultimately turn into something other than a bog — drier land with leafy trees like birches and aspens replacing the black spruces, with little to no moss and, as a result, less carbon storage.

The bog is laced with instruments to measure the water table, the evaporation of water from vegetation and other characteristics, but researchers are still uncertain why it is not recovering.

What is clear is that recovery from a fire is a delicate process, one that global warming will complicate.

“Climate change will determine the severity and frequency of burns the bog has to be resilient to,” Ms. Housman said.

Referring to Scorcho, Ms. Wilkinson said: “Like, if this was to burn again? Who knows, really, what’s going to happen.”