Hurricane Matthew reemerged over the ocean on Tuesday morning, following its initial landfall in Haiti as a strong Category 4 storm. As of 11 a.m. EDT, the storm was still packing maximum sustained winds of 145 miles per hour, and was moving north, across the Gulf of Gonave at 10 miles per hour.

The National Hurricane Center has now issued a hurricane watch and tropical storm watch for portions of Florida. Before the storm reaches the U.S., though, it is set to pound eastern Cuba and much of the southeast and central Bahamas through Wednesday night.

The revised track forecast for Matthew takes the storm over or just east of the Florida coast from West Palm Beach north to Jacksonville, then inland over the Carolinas by Saturday, followed by a possible threat to New England by Sunday.

Storm track and intensity forecasts have a high amount of uncertainty five days in advance, however.

Thousands of people are attempting to ride out the storm in makeshift shelters built of wood and corrugated steel that lack protection from torrential rains, let alone hurricane force winds. Humanitarian groups and weather forecasters are fearing the worst from Matthew.

The storm is the first Category 4 storm to hit Haiti in 52 years. A more comparable storm, based on its track and intensity, was Hurricane Hazel, which struck Haiti in 1954 and killed at least 1,000.

SEE ALSO: This is what astronauts saw from 250 miles above Category 4 Hurricane Matthew

The storm, which has a classic donut-shape appearance to it on satellite imagery, is among the most intense storms ever to form in the Caribbean at this time of year, with maximum sustained winds of 145 miles per hour at landfall, and a minimum central air pressure of just 934 millibars. In general, the lower the air pressure, the stronger the storm, and this reading was comparable to many Category 5 storms.

Hurricane Matthew's biggest threat may not be its strong winds, however, but the heavy rains it is dumping on Haiti's deforested hillsides. Up to 40 inches of rain are expected in some places, along with a 10-foot storm surge at the coast. Haiti has a pervasive problem with deforestation as residents chop down trees for firewood and to construct shelters with, and this leaves hillsides vulnerable to mudslides during heavy rainstorms.

"They are getting everything a major hurricane can throw at them," said Dennis Feltgen, a meteorologist and spokesman for the National Hurricane Center (NHC) in Miami.

After Haiti, the storm is headed for a potential landfall in southeastern Cuba, where the U.S. military base at Guantanamo Bay is on alert, and then is expected to blast the Bahamas for two days as a Category 3 or 4 storm.

Reports from Haiti indicate significant damage has already taken place, with at least one death reported there, and two more in other Caribbean nations. According to Chris Bessie with Catholic Relief Services, who is helping to coordinate disaster response efforts with the group's field workers and the government, there has been damage in the western areas of Haiti and "nonstop rain" in the capital of Port-au-Prince.

Bessie says the organization's field office in Les Cayes, close to where the storm made landfall, was damaged but no one was injured. The area, he said, is “still in a state where they have to stay indoors, where there is heavy wind and just a tremendous amount of rain,” he said in an interview with Mashable.

“We’re not really able to assess the extent of damage and how many people have been affected at this point,” he said, adding, "there’s going to be a lot of work to do."

According to reporting by the Associated Press, people in the area where the storm made landfall struggled to survive the night in their fragile homes:

"The winds are making so many bad noises. We're just doing our best to stay calm," Jenniflore Desrosiers said early Tuesday as she huddled with her family in her fragile cinderblock home, which had sprung numerous leaks from pelting rain.

A girl watches as authorities arrive to evacuate people from her house in Tabarre, Haiti, Monday, Oct. 3, 2016. Image: AP

Landslides and downed trees on roadways were preventing movement in numerous areas along the south coast of the country. The few places that were on the electrical grid had apparently lost power and cell phone service was spotty.

In an unregulated sprawl of shacks built on hillsides near the northern edge of the capital, some poor families did what they could to reinforce their tin-and-tarp home and hoped for the best."I know my house could easily blow away. All I can do is pray and then pray some more," Ronlande Francois said by the tarp-walled shack where she lives with her unemployed husband and three children.

After Hurricane Matthew begins its passage across the Bahamas, it is likely to turn more northwestward, either paralleling or crossing over Florida's highly populated eastern coastline. 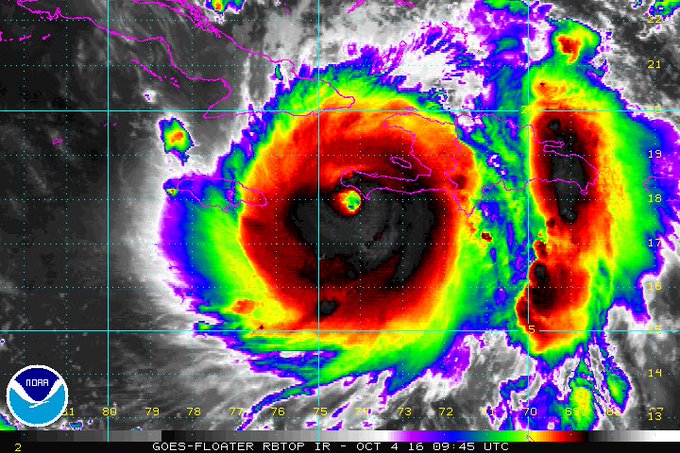 Eyewall of category-4 Hurricane Matthew about to push onto coast of immensely vulnerable Haiti. These are tough images to look at.

Hurricane or tropical storm watches are likely to be hoisted for portions of the Sunshine State on Tuesday. The storm is forecast to be a powerful "major" hurricane of Category 3 intensity or greater when it passes near or over parts of Florida, which means it would be capable of widespread, "devastating" damage.

Sea surface temperatures in the vicinity of Florida and the Bahamas are near to above average for this time of year, and are mild enough to support a major hurricane.

Unusually mild ocean temperatures are one climate change-related factor thought to be boosting the frequency of the most powerful hurricanes and typhoons in some parts of the world, possibly including Hurricane Matthew. 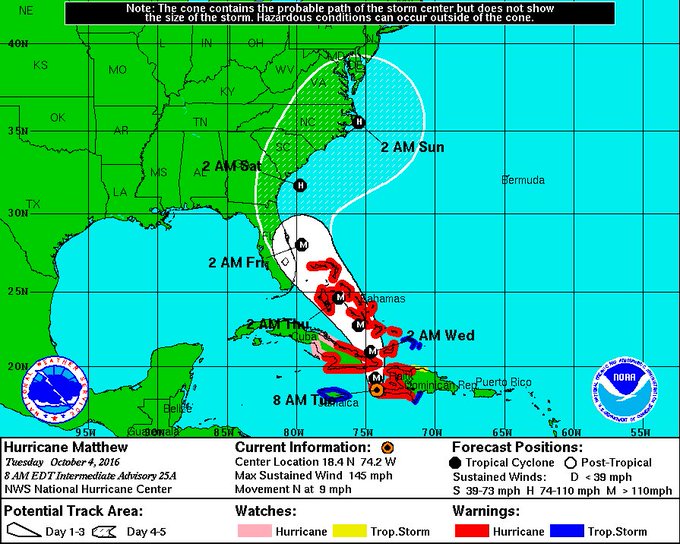 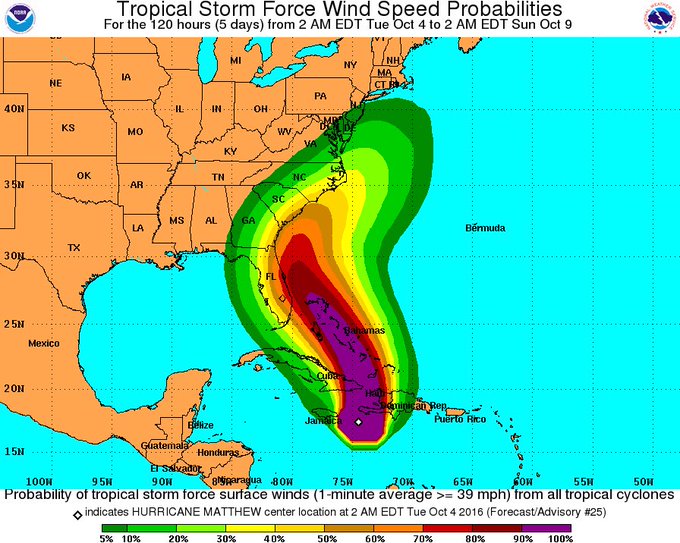