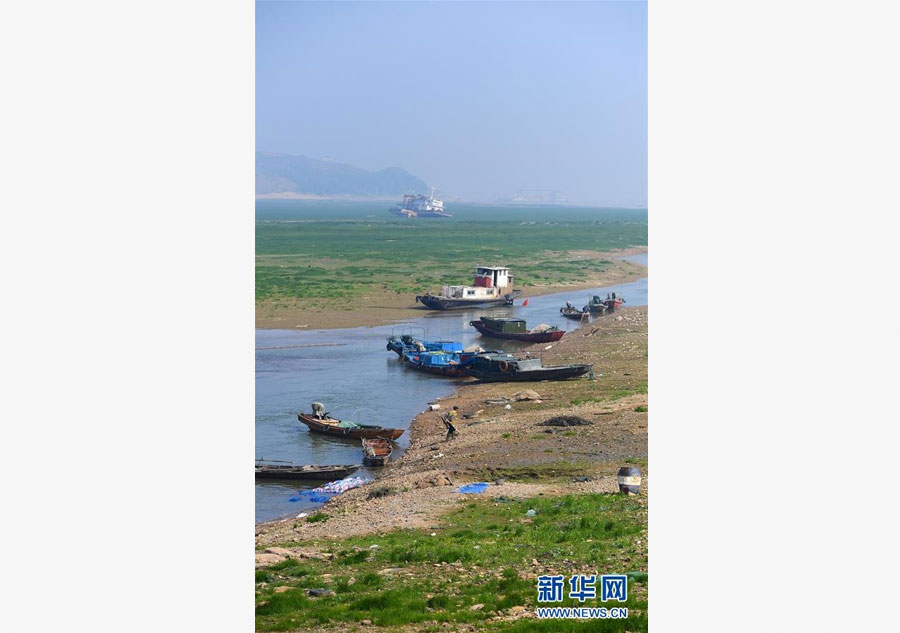 
Much of the Poyang Lake, which is about three times the size of Greater London, has disappeared after the northern part of China's Jiangxi Province had suffered from a shortage of rainfall since mid-September.

In the images, taken on November 2 in the city of Lushan, the once expansive and abundant lake had turned into a huge grassland, allowing residents to walk across on foot. 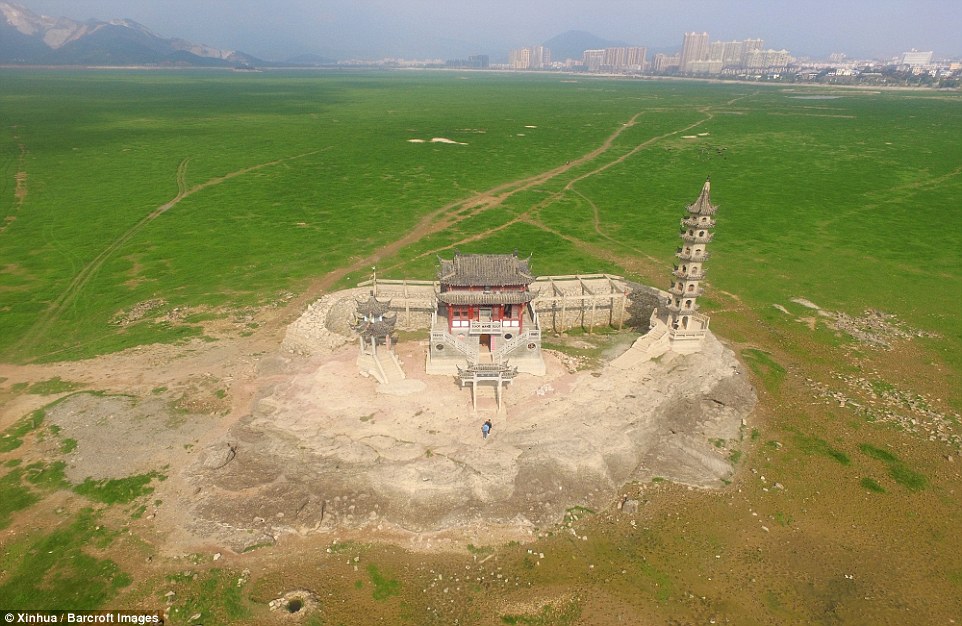 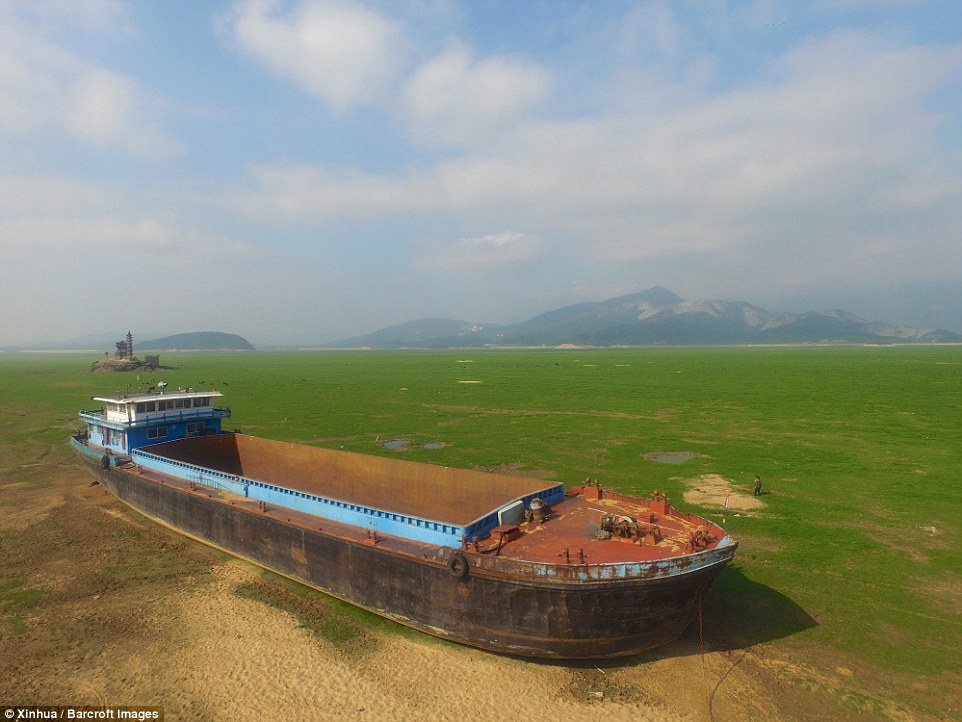 The size of the Poyang Lake fluctuates every year.

Historically, the lake was known for its abundance in freshwater fish and shrimps and supplied water resources for nearby rice fields.

However, pictures taken this week in Jiujiang revealed scenes a world away.

In Jiujiang's Lushan district, a huge ship could be seen stranded on the former lake bed of Poyang. 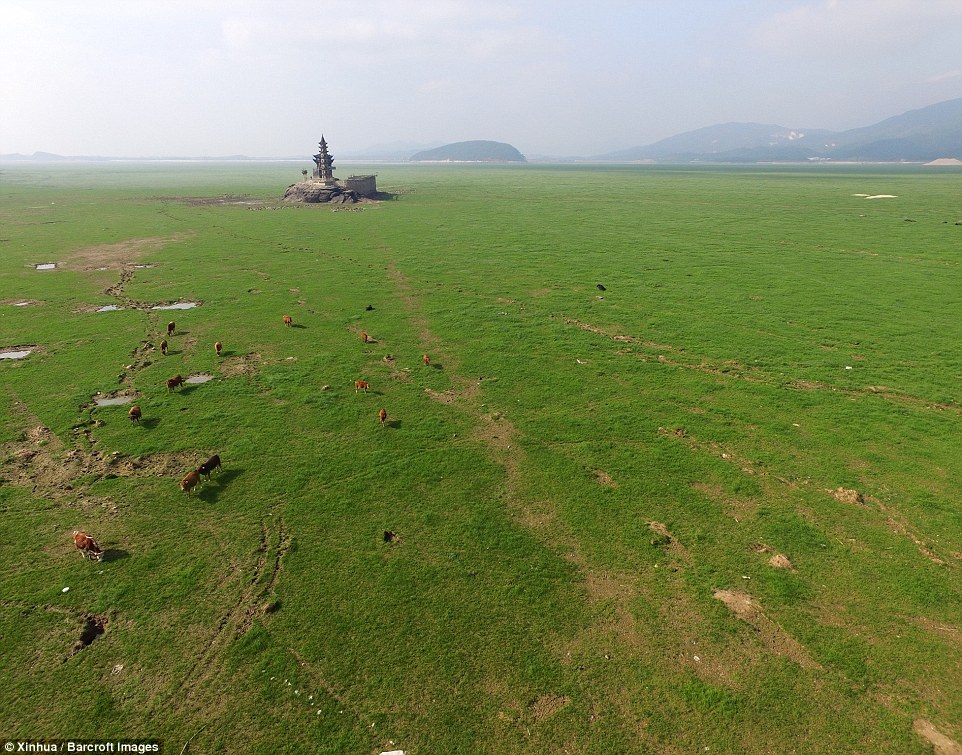 The Luixingdun island, once used as a navigation mark and lighthouse, was surrounded by grass as cattle grazed in the field

The Luixingdun island, once used as a navigation mark and lighthouse, was surrounded by expansive grass as cattle grazed in the field.

A pagoda and a temple, once situated in the middle of the lake, stood on the dried lake bed alone.

According to the Xingzi Hydrological Station, the water level of Poyang declined to 10.6 metres (34.8 feet) on November 3, according People's Daily Online.

The low-water level has raised an alarm in the local fishing industry. Fishermen have complained about the number and size of the fish they managed to catch.

Furthermore, the fishing season was shortened by two months this year as water started receding in September.

The local fishery bureau also said the fish resources of Poyang Lake had decreased gradually in the past decade. 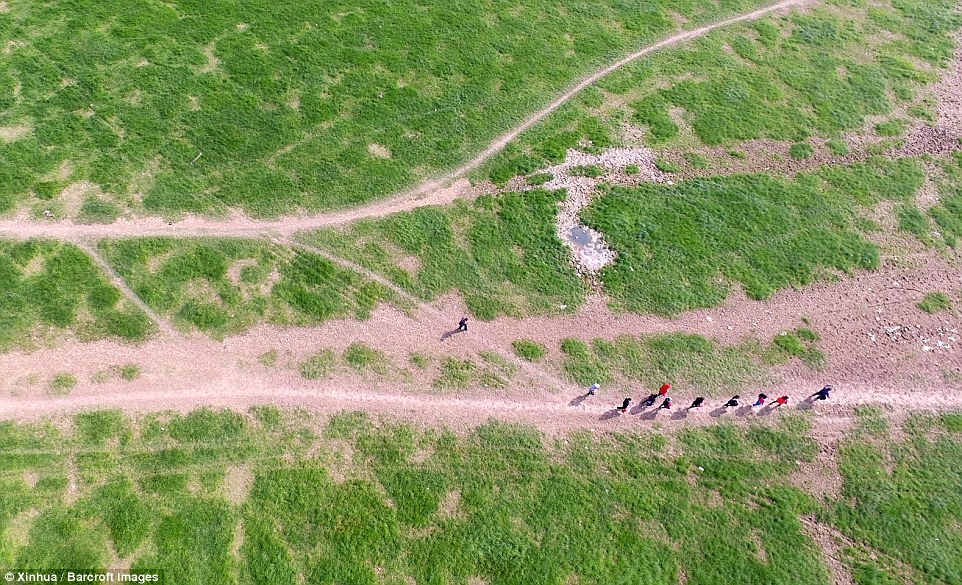 The Poyang Lake regularly dries out in winter. However, this year's dry spell came 54 days earlier than usual.

The water level of Xingzi section fell below 12 meters (39.4 foot) on September 19, marking the early onset of the dry season.

According to Jiangxi Hydrology Bureau, the low-water period of Poyang Lake has become longer since 1952.  The water level of the lake, which is connected to the Yangtze river, started receding earlier and earlier every year.

It can be linked to the decrease of the water levels in the Yangtze River, caused by reduced rainfall and human activities, reported Xinhua, citing an official from the water resources department of Jiangxi.

Poyang Lake in Jiangxi Province, once the largest freshwater lake in China, is fast drying-up and might soon become a prairie or a desert like the Aral Sea in Kazakhstan due mostly to human ignorance.

Chinese scientists are reporting with alarm that more parts of Poyang Lake have dried up leaving huge swathes of grassland in areas once inundated by up to 25 meters of water. That depth has been reduced on average to only eight meters and even this level is in danger since water levels have fallen continuously since September.

The lake's water level in eastern Jiangxi as measured by the Xingzi hydrological station plunged dropped to 10.6 meters on Nov. 3. The lake entered its low-water period of less than 12 meters on September 19, 54 days earlier than usual.

The early low-water period can partly be blamed on decreasing water levels in the Yangtze River, reduced rainfall and human activities, said Zhu Lilai, deputy director of the water resources department of Jiangxi.

The lake is fed by the Gan, Xin and Xiu rivers that connect to the Yangtze through a channel. Historically, the lake is known for its abundance in freshwater fish and shrimps and supplied water for nearby rice fields.

Scientists report tourists can now walk on the former lakebed in Duchang county as if they were wandering through fields. The lakebed is covered by flowering aubergine plants. Cattle are grazing on the exposed bed at Lushan.

Poyang Lake might soon share the fate of the Aral Sea, once the world's fourth largest lake, whose shrinking has been described as "one of the planet's worst environmental disasters."

By 2007, it had declined to 10% of its original size, splitting into four lakes. By 2009, the southeastern lake had disappeared and the southwestern lake had retreated to a thin strip at the western edge of the former southern sea.

Satellite images taken by NASA in August 2014 revealed that for the first time in modern history, the eastern basin of the Aral Sea had completely dried up. The eastern basin is now called the Aralkum Desert.