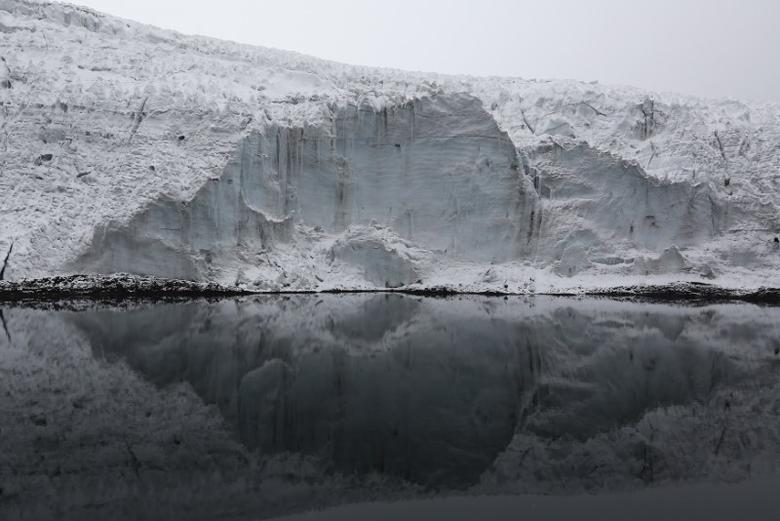 File photo of a view of the lake formed by meltwater from the Pastoruri glacier, as seen from atop the glacier in Huaraz, September 19, 2013. REUTERS/Mariana Bazo

But the planet is already two-thirds of the way to that lower and safer goal, and could begin to pass it in about a decade, according to Richard Betts, head of climate impacts research at the UK Met Office's Hadley Centre.

With world emissions unlikely to slow quickly enough to hit that target, it will probably be necessary to remove some carbon pollution from the atmosphere to stabilize the planet, scientists said at a University of Oxford conference on how to achieve the 1.5 degree goal.

That could happen by planting forests or by capturing and then pumping underground emissions from power plants. Or countries could turn to controversial "geoengineering" techniques, such as blocking some of the sunlight arriving on the planet, to hold down temperatures, they said.

"Negative emission technologies are likely to be needed, whether we like them or not," said Pete Smith, a plant and soil scientist at the University of Aberdeen.

But other changes – such as reducing food waste and creating more sustainable diets, with less beef and fewer imported greenhouse vegetables – could also play a big role in meeting the goal, without so many risks, he said.

"There are lots of behavioral changes required, not just by the government ... but by us," Smith said.

The scientists said building resilience to deal with climate change impacts was likely to prove tricky, not least because their scale and timing remains hard to predict with precision.

"We need to get ready to deal with surprise," said Jim Hall, director of the Environmental Change Institute at the University of Oxford.

Maarten van Aalst, director of the Red Cross/Red Crescent Climate Centre, said officials in the Netherlands failed to issue a heat warning earlier this month, despite a prediction of very hot days, because they assumed – falsely – that lower nighttime temperatures in September would help moderate the problem.

That kind of difficulty in making good decisions about changing conditions is playing out in many places, van Aalst said.

"This is the sort of misperception ... that will determine how we cope with these risks," he said.

Virginie Le Masson, a researcher on disaster risk, climate change and gender issues at the London-based Overseas Development Institute, said climate change was another factor – on top of widespread problems such as bad governance and social inequality – adding to the pressures people face.

Helping those most vulnerable to climate change to withstand the problem will require efforts to help them not only adapt to changes but also to absorb shocks, van Aalst said.

Ethiopia's government, for instance, operates a public works program that pays poor people cash or food for work on public projects, such as improving water channels or roads.

The program can be quickly scaled up in times of drought to provide a social safety net for those affected, while the work done improves water systems and builds drought resilience, said Stephane Hallegatte, a senior economist working on climate change issues at the World Bank.

Other effective ways to boost resilience among the poor include Rwanda's push to provide health insurance – 80 percent of people now have coverage – and giving poor people access to savings accounts, as a safer alternative to the tradition of putting cash into disaster-vulnerable livestock, Hallegatte said.

The problem, the scientists said, is that some of the coming pressures may be very hard to reduce. Competition for land, for instance, is likely to grow in coming years as it is simultaneously needed to grow food, to protect biodiversity and store carbon in forests, and to grow more climate-friendly biofuel crops.

That makes holding down global temperature rise – currently on a path toward at least 2.7 degrees Celsius of warming – more difficult, the scientists said.

"We are woefully behind in our current response to climate change," said Stefan Raubenheimer, the director of SouthSouthNorth, a Cape Town-based organization.