The largest voter turnout ever and, to Joe Biden, the largest number of votes in US history made American democracy work. Thank goodness. 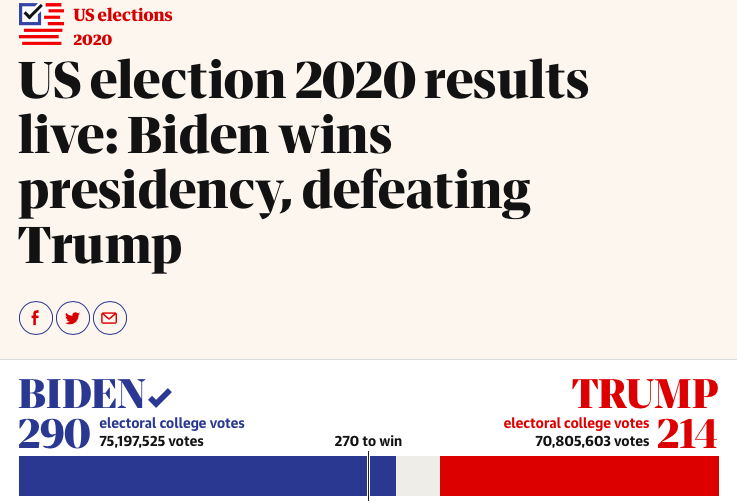 Vice-President-elect Kamala Harris promised that the Biden administration will work to “combat the climate crisis.” Pointedly she thanked America for choosing “hope, decency, science and yes, truth.” She is the first woman and first woman of colour to hold the office of vice-president in the US. She is also likely to be the most influential vice-president ever.

Tonight (7 November) from Wilmington, Delaware, Joe Biden, at 77 years old, really came alive during his first speech as President-elect. It was an energetic, flawless and inspiring speech with a passion he never showed in his campaign speeches.

Biden promised that he would lead the battle to “save our planet by getting the climate under control.” An apt turn of phrase when humanity faces runaway climate change.

Other good quotes from his fine speech (I might be paraphrasing slightly): “We will lead not only by the example of power but the power of example,” and “The decision not to cooperate is a choice, and the decision to cooperate can be a choice.”

Thank goodness also that there was none of the feared violence that could have erupted in such a polarized election, especially as so many States were so close for so long as the mail-in ballots were counted. The election was a win for democracy and peaceful political restraint throughout the United States.

Present Trump has not yet conceded, instead calling on the American courts to reverse an obviously irreversible election result (Biden has nearly 4.5 million more votes and the count is almost done). So far, the courts have declined to get involved.

The Biden-Harris language of combating and battling global climate change is exactly right. It will take World War-like national and international mobilization.

With appreciation from the rest of the world, America can be proud of the 2020 forty-sixth US presidential election.

(Image via The Guardian, with thanks)