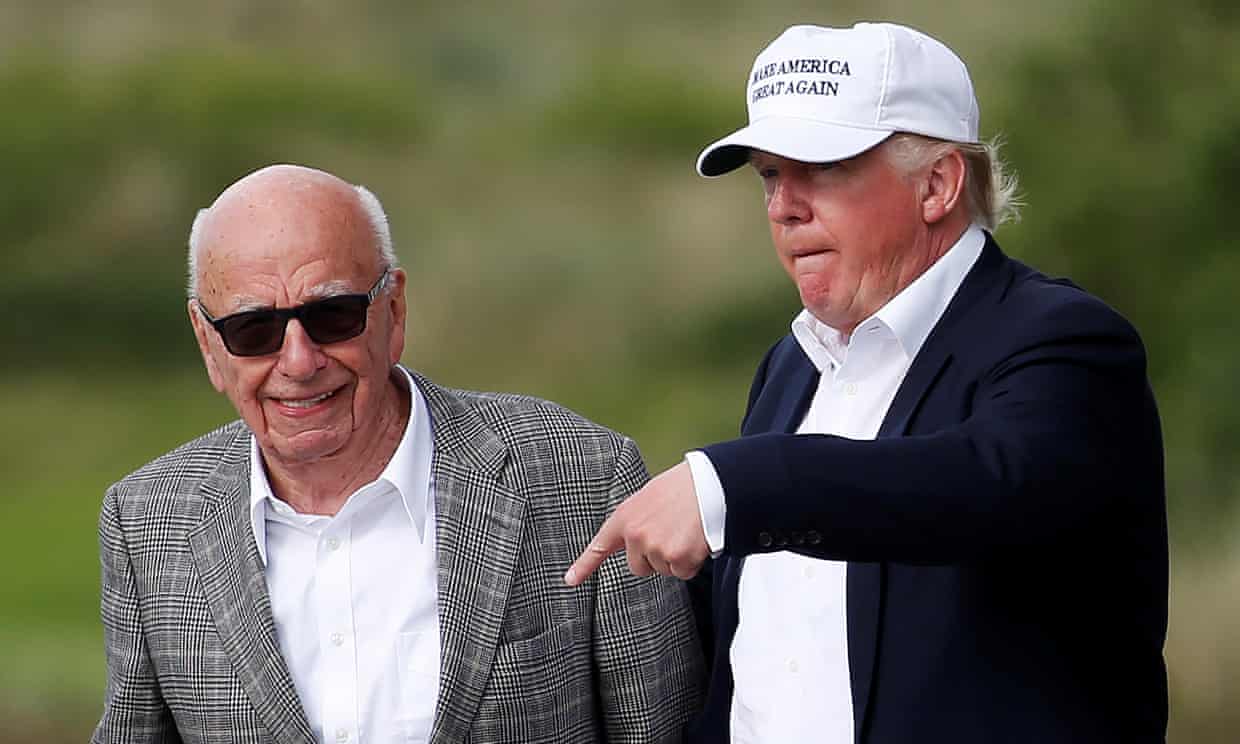 Republican presidential candidate Donald Trump speaks to media mogul Rupert Murdoch as they walk out of Trump International Golf Links in Aberdeen. Rupert Murdoch and his conservative media outlets like the WSJ are among the worst influences on perceptions of climate change. Photograph: Carlo Allegri/Reuters

New studies show that climate polarization is on the rise in the US; WSJ climate coverage is full of denial...

A new study by a team of sociologists at Oklahoma State University has found political polarization on climate change is growing in the United States. Today’s Republicans are less likely than they were a decade ago to accept that the effects of global warming have begun, that humans are responsible, and that there is a scientific consensus on these questions. Democrats and independents are slightly more likely to answer these questions correctly today than a decade ago.

Climate change is now more polarizing in the US than abortion or gay marriage. At the same time, climate denial has become the norm among Republican policymakers, as they’ve grown increasingly anti-environment. As the study notes:

What was once a modest tendency for Congressional Republicans to be less pro-environmental than their Democratic counterparts has become a chasm—with Republicans taking near-unanimous anti-environmental stances on relevant legislation in recent years, especially 2015.

Policymakers work for their constituents, so if Republican voters are generally apathetic about the tremendous threats posed by climate change, party leaders have relatively little motivation to tackle the problem (aside from the obvious, like protecting future generations and the long-term viability of their political party).

However, the public responds to cues from intellectual and cultural leaders. Were Republican leaders to start listening to climate science experts, many of their voters would likely follow suit. After all, most American conservatives already support climate policies; they just don’t view the issue as a priority. Unfortunately, today’s Republican Party is essentially controlled by the fossil fuel industry. As the study notes:

we and others have argued that the conservative movement, fearful of the regulatory implications of climate change, and seeking to defend the current economic system built on fossil fuel use, has been the driving force behind organized climate change denial.

Public perception and priorities are also heavily influenced by the media. A 2013 study found that conservative media consumers are more likely to distrust scientific experts and reject climate science realities.

Out of 93 climate-related opinion pieces published in the Journal during the time period examined, 31 featured climate science denial or other scientifically inaccurate claims about climate change (33 percent) 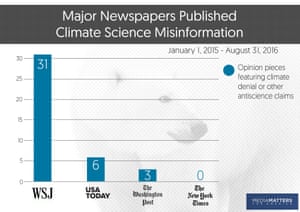 A study last year found that the WSJ’s biased climate coverage extended beyond its opinion pages to its news coverage as well. And during the time of the scandalous #ExxonKnew revelations, Media Matters found that the WSJ was a constant apologist for the oil company. 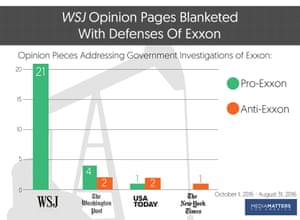 The WSJ readership is heavily comprised of wealthy, powerful men, and it has become an increasingly conservative paper since Rupert Murdoch purchased it. Conservative media consumers are bombarded with climate misinformation and fossil fuel industry propaganda, usually without the authors’ fossil fuel ties being disclosed.

The industry has created an echo chamber in which they control the climate messaging of conservative media and party leaders, which in turn trickles down to misinform Republican voters, growing the partisan gap on climate change. The authors of the Oklahoma State study see no easy way break through what they call the “denial countermovement”:

consisting of fossil fuel corporations and business allies like the U.S. Chamber of Commerce, conservative think tanks and their funders, conservative media, and a large supporting cast of front groups, bloggers, and contrarian scientists …

There’s plenty of blame to go around. Republican policymakers have failed to deliver much-needed leadership on climate change, American conservatives have relied too heavily on biased media sources, and conservative media outlets like Murdoch’s WSJ have misinformed their readers.

Democrats are tackling climate change on their own

Until the fossil fuel industry’s control over conservative policymakers and media loosens, American climate action will be up to the Democratic Party. This weekend, President Obama and Chinese President Xi announced they will formally ratify the Paris climate change agreement. If she is elected president, Hillary Clinton likewise plans to rely on executive actions to tackle climate change.

But there’s a limit to what the President of the United States can do on his or her own. US Congress still controls American climate policy, or the lack thereof. As long as the conservative media continues to misinform readers and breed a conservative culture of climate denial, American efforts to tackle the threat of climate change will be constrained, and the future of human society and of the Republican Party will be endangered.