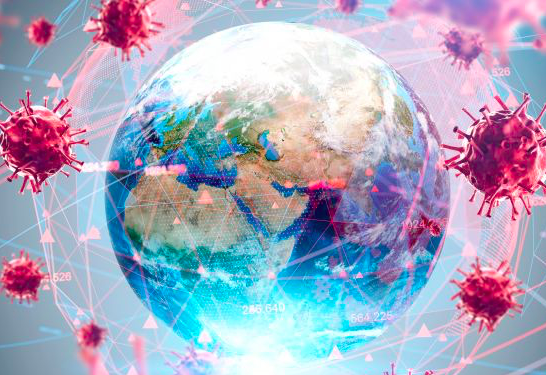 SARS-CoV-2 (coronavirus or Covid-19) is a new infectious disease that has become a global pandemic.

This adds to the overwhelming evidence and the recommendations of climate scientists that we must put global greenhouse gas—especially carbon—emissions into decline on an immediate basis. One irony of the pandemic is that while governments and corporations only plan to keep emissions increasing, the new virus will most likely put them into decline this year. However, when the pandemic is over, those world powers will boost the fossil-fueled economy and global emissions more than ever. It’s an insanely evil plan for unprecedented suffering of humanity—and global suicide.

Here is a description of having Covid-19 from a healthy adult living a healthy lifestyle in a healthy, clean-air environment region of British Columbia, Canada:

“I began feeling 'unwell' late one night this month. I just felt off, no identifiable symptoms, just an over-all feeling of unwellness and tired. Next morning, I started the cough and sore throat, some sneezing but not much, not much of a runny nose, either, but cold-like symptoms, for sure. I just wanted to sleep, and I did, all day. Next day, I woke up with a headache and severe sore throat and coughing, like I have never coughed before!!! It was difficult to keep liquids down because I would cough so much, I'd puke everything up and that hurt the throat and stomach muscle really bad.

“The next day, I was coughing almost non-stop and barely able to catch a breath. I had a low-grade fever that came and went. Oh my god, my lungs and surrounding ribs hurt so much, I have never ever had such pain! The pain was horrible; even Tylenol 3 did nothing to diminish the pain. It also became almost impossible to sleep, and if I managed 10 minutes here and there, it was sitting up; there was no way you could lie down, or at least I couldn’t because it felt like my lungs were filling up with liquid whenever I did lie horizontally. My husband wanted to take me to the hospital but I was just too weak and sick. I just wanted to try and sleep... sleep and cough, more like cough and pain.

“But later when my lungs felt white hot and breathing was more difficult, we followed protocol and had an ambulance take me to the hospital. I needed help so bad! At the hospital, I was tested and given oxygen and allowed home with a prescription and instructions. At this stage, I have never been so sick and so sore all over in all my life!! And I still can't sleep more that 10 minutes at a time. Seven days on, I feel as though I can now see a light at the end of this horrible, horrible sickness. I can breathe a lot better, my coughing has lessened, and I am actually out of bed and walking around my room. I'm still in quarantine, of course.”

As the Journal of Clinical Investigation reports, SARS-CoV-2 is a new infection that started in the city of Wuhan, China with dangerous cases of “acute severe respiratory syndrome.”

The group of viruses called coronaviruses was first identified in the 1960s and reported by health authorities to be common in humans and responsible for a small percentage of common cold cases. The first known severe illness caused by a coronavirus emerged with the 2003 Severe Acute Respiratory Syndrome (SARS) epidemic in China. A second outbreak of severe illness began in 2012 in Saudi Arabia with the Middle East Respiratory Syndrome (MERS).

The accounts of people with severe respiratory distress have been explained by the research on the new respiratory virus.  Once in the body, it attacks the immunity cells that line our airways. Covid-19 is different in that it affects both the upper and lower respiratory tracts practically at once. Dying cells slough away, filling the airways with junk and carrying the virus deeper into the body, down toward the lungs. Blood vessels open up to carry more immune-bearing fluid to the invading Covid-19 virus. As the infection progresses, the lungs clog with dead cells and fluid, making breathing more difficult. The immune response may over-react, in which case even more fluid pours into the lungs.

The virus has spread extremely fast, though the average person with the virus infects 2 to 2.5 other people, which is not unusual for a respiratory virus. Pneumonia and respiratory failure are the cause of death of the fatal cases—mostly older people, and those with pre-existing disorders.

Returning to the specter of new infectious diseases paper, given that microbes can adapt to higher temperatures, there is concern that global warming will select for microbes with higher heat tolerance. These can defeat our defenses and bring on new infectious diseases. Under a new warmer environment, microbes will be pushed to adapt and, unlike mammals, they can do this quickly and appear as new virulent infectious diseases. In other words, after living with a stable climate for thousands of years, we humans have developed some degree of immunity to the known viruses and in modern times also developed vaccines for the most vulnerable populations. But all that is changing.

In all respects, our ability to adapt to a new hotter climate depends on how slowly the climate changes. According to a 2013 climate research paper called “Natural systems in changing climates,” today our greenhouse gas emissions have locked in a global surface temperature increase of at least 1.5°C, and by then the planet will be heating up ten times faster than any rate in the last 65 million years (our earliest ape ancestors only appeared on Earth about ten million years ago). Our industrial civilization is now changing the climate at a rate that viruses will cope with by changing to new virus strains, to which we will be vulnerable.

There are some wild rumors circulating on the internet that the Journal of Clinical Investigation paper dispels. Shortly after the epidemic began, Chinese scientists sequenced the genome of SARS-CoV-2 and made the data available to researchers worldwide. Using this information, on 17 March 2020, the science journal Nature Medicine published a research paper, “The proximal origin of SARS-CoV-2.” The research analysis of the genome sequence data from SARS-CoV-2 found no evidence that the virus was made in a laboratory or otherwise engineered. It occurred through natural evolutionary mutation, assumed to have jumped from an infected non-human animal to human. “By comparing the available genome sequence data for known coronavirus strains, we can firmly determine that SARS-CoV-2 originated through natural processes,” said Kristian Andersen, PhD, an associate professor of immunology and microbiology at Scripps Research and corresponding author on the paper.

The research concluded that if the SARS-CoV-2 entered humans in its current pathogenic form from an animal source, it raises the probability of future outbreaks, as the illness-causing strain of the virus could still be circulating in the animal population and might once again jump into humans. The chances are lower of a non-pathogenic coronavirus entering the human population and then evolving properties similar to SARS-CoV-2. So far there is no scientific confirmation of a specific animal host.

All but about one and a half percent of us will survive this new virus, but if we don’t demand that governments at the very least stop subsidizing fossil fuels and boost the clean renewable energy industry—NOT the fossil fuel industries—the human race cannot expect to survive the changed hostile climate of our own making.

The impressive successful international response to the new virus does prove that collectively governments and citizens can unite to face a global life-threatening emergency. The healthcare community has responded brilliantly, and clinical trials on a vaccine have already begun. Now if we could get our act together on the climate disruption global threat to life, the future could still be bright.