Most people by now will have heard that the Covid-19 pandemic is a frightening global emergency demanding immediate drastic government action and public behaviour changes, even though the measures are collapsing the world economy — and that’s because the growth of the virus infections is exponential. (See, for example, from Forbes on 17 March 2020: “Why 'Exponential Growth' Is So Scary For The COVID-19 Coronavirus.”) 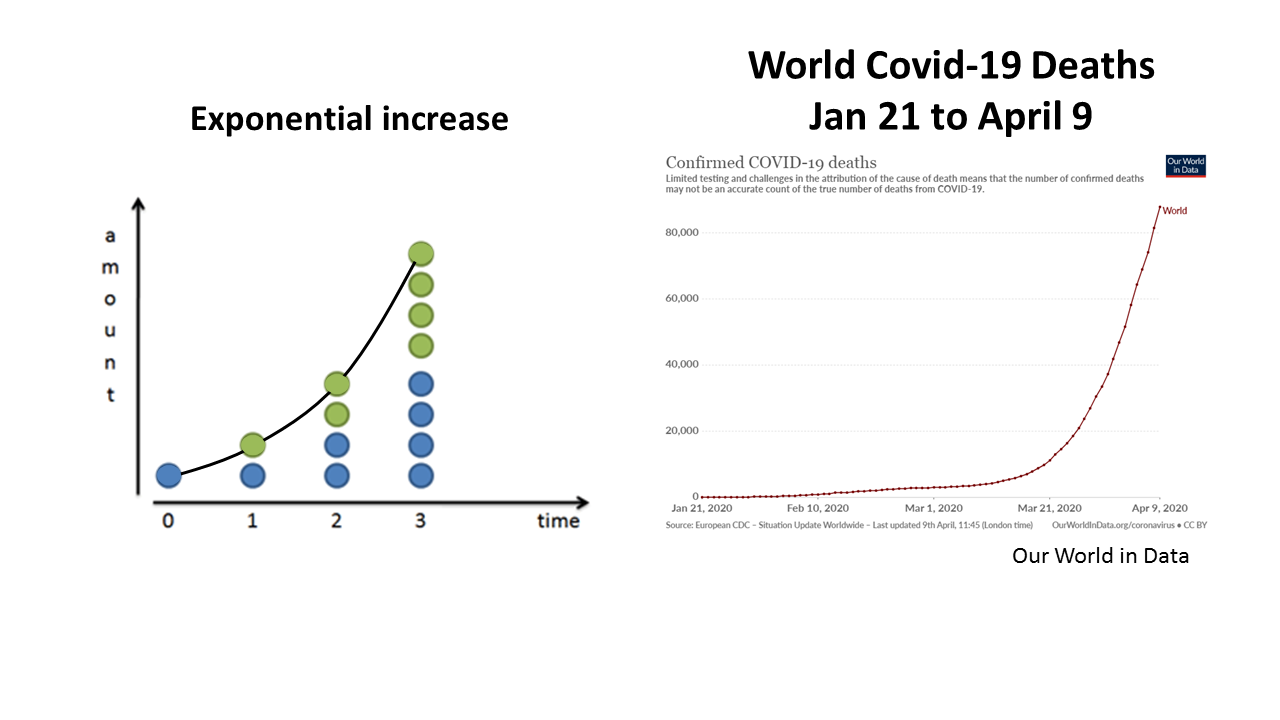 The World Health Organization (WHO) has issued a press release on the alarming “near exponential growth rate” in world Covid-19 infections and the increasing number of deaths. It has always been essential to understand what an exponential rate of increase means for environmental health as well infectious diseases. As global warming will increase more novel virus infections — new ones to humanity — we need to grasp how different an exponential increase in numbers is.

So why is exponential so bad for an infectious disease? Exponential growth shows greater increases with passing time. The more infected cases, the higher the rate of increase. To put it simply, exponential is an explosive increase. On a graph of a number of something being recorded over time, the graph rapidly increases, shooting up to become virtually a skyrocketing vertical line. For example, if one couple of mice in a country doubles its mouse population every year starting with 2 in the first year, the population would be 4 in the second year, 8 in the third year, 16 in the fourth year, and so on. The population is growing exponentially to the power of 2 each year in this case. In just 10 years, the mouse population would be over 1000, and in 20 years over 1 million. In time, the entire country would be overrun with mice, but they would eat the country up and the mouse population would crash.

A frightening characteristic of cancer is its exponential growth, which can rapidly overwhelm the otherwise healthy patient. Many of us have lost friends or relatives like that to cancer.

A virus or bacterial infection affecting one person can grow exponentially in that person’s body. A patient can be admitted to hospital one morning with a fever and headache, only to die by the end of the day. This happened in the deadly American flu pandemic of 1918 (mistakenly called the Spanish flu). Despite orders by American cities to lock down and wear masks, after the infection spread an estimated 675,000 Americans died of the virus. Cities like New York that applied quarantine measures early fared the best on the death rate.

Here’s the good news on Covid-19 first. The Chinese government understood exponential and acted on it. It looks like China has the situation under control. Since March 28, in China the number has been virtually flat, with no new cases for the first time on April 7. On January 23, the government of China imposed a lockdown on Wuhan (where the virus infection started) rapidly followed by other cities in Hubei Province, involving over 50 million Chinese. No quarantine on anything like such a scale had ever been tried before. The world has much to thank the Chinese government for. If China had not acted and set an example for the world, the situation today would be hard to imagine.

The world situation is a different story. Our World in Data (https://ourworldindata.org/coronavirus) website for world cases starts on 19 March 2020 with 8,842 virus cases, which by April 8, is up to 81,478 with a doubling of world cases in the past 8 days, an exponential type of rate of increase. The deaths from the Covid-19 virus are from an aggressive viral pneumonia, for which we have no treatment. Deaths started registering at the start of February and are up to 87,816 by April 9, again an exponential type of rate. World Covid-19 deaths have doubled in the past 7 days.

Almost 90,000 people have died from Covid-19 in the past three months, of about 1.5 million infected cases. The latest rate of deaths in the US is the worst (1,997 deaths on April 8), the same day that New York State had its worst day and biggest jump for Covid deaths: 799. More than 5,280 people have been killed in New York City by the virus. Overall, America has suffered over 14,817 deaths (April 9) out of its population of 327 million, with the number of deaths doubling in 5 days. It is looking very bad. China’s drastic containment measures have worked and China has only had 3,339 deaths out of a population of 1,368 billion. That’s a fifth of the total American death rate so far and the same as New York has had.

The American Republican administration ignored the example of China. From the same time in January that China was locking down Wuhan, and all through February, the US Republican President Trump was not concerned about the Covid-19. His infamous January 22 quote was, “We have it totally under control. It’s one person coming in from China, and we have it under control. It’s going to be just fine.” As late as February 27, he said the virus was going to disappear like a miracle. The latest projection is that 60,000 Americans will die from the Covid-19 virus. America has some of the best public health doctors in the world, but America, particularly under the Trump Republican administration, is not so good at looking after the public health of its citizens — nor for that matter, its most precious asset: America’s natural environment.

Global warming is expected to lead to more such new virus pandemics. Thanks to China’s successful containment handling, the world knows how to deal with them. The current Trump administration’s hands-off science and history-ignoring callous denial of the danger for America is the grossest case of negligence. It will cost tens of thousands of Americans their lives.

Exponential Covid-19 growth Covid-19: A Tale of Two Countries (China vs. the US)
Tweet