China is throwing the world’s leaders a party, and oil bulls may be hit with the hangover...

Authorities in the Asian nation have ordered hundreds of factories to curb activity ahead of the Group of 20 summit in Hangzhou in early September, in a bid to ensure blue skies when the red carpet is rolled out. The curtailments, along with flooding earlier this summer, may cut petroleum demand in the world’s second-biggest oil consumer by 250,000 barrels a day in the third quarter, according to industry consultant Energy Aspects Ltd.

The slowdown at facilities including refineries and petrochemical plants along the Yangtze River threatens to weaken Chinese oil imports that rose to record highs in the first half of the year, at some times exceeding even those of the U.S. Those unprecedented purchases, along with supply disruptions, helped crude rally about 80 percent from a 12-year low earlier in 2016, and any sustained recovery will hinge on continued strong demand from the world’s biggest energy consumer.

“There is a weather and policy induced slowdown in China,” said Michal Meidan, an analyst at Energy Aspects. “While the floods seemed to have died down, we are entering a period ahead of the G-20 when there is going to be industrial curtailment. Chinese demand is certainly going to be weak.” 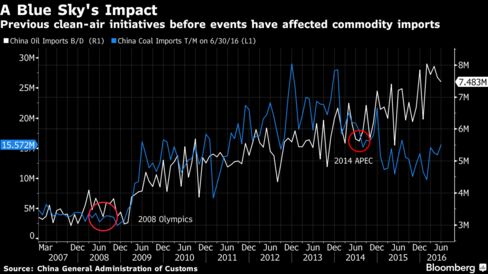 President Xi Jinping is expected to showcase his nation’s strengths at the G-20 summit, which will host leaders of countries that account for two-thirds of the world’s population and 85 percent of its economic output. They are gathering at a time of slowing trade and tepid global growth. China’s recent stabilization faltered in July as private businesses remain reluctant to invest and authorities seek to curb financial risks and cut excess capacity.

China has a history of enacting temporary environmental measures to clean the air before hosting major events, which have affected commodity prices. Before the 2008 Olympics in Beijing, small coal mines in the northern provinces of Shanxi and Hebei were ordered to shut. That exacerbated a supply shortage of the fuel, sending local prices to a record ahead of the Games.

Iron-ore prices slumped in 2014 when the Chinese government ordered some steel mills in the world’s largest buyer to suspend production before the Asia-Pacific Economic Cooperation meeting in Beijing. They again tumbled last year ahead of closures before the world track and field championships and a parade to mark the 70th anniversary of Japan’s surrender in World War II.

“The rationale is that you have to shut down in order to achieve absolutely clean air,” Salmon Aidan Lee, a Singapore-based consultant at Wood Mackenzie Ltd., said by phone. “Shutdowns have happened before during APEC meetings in Beijing and the Olympic Games many years ago. What is unprecedented is the scale or magnitude of this shutdown.”

For G-20, Shanghai, which is 180 kilometers (112 miles) northeast of Hangzhou, has asked 255 companies, including coal-power plants and oil refineries, to curb output from Aug. 24 to Sept. 6, according to a statement on the website of the city’s Environmental Protection Bureau. Officials in Ningbo, about 150 kilometers east of Hangzhou, proposed cuts or closures at 445 companies, including petrochemical plants and producers of steel, cement and paper, according to a document obtained by Bloomberg.

In spite of the planned measures, some analysts remain optimistic that China’s overall oil use could rise in the third quarter, compared with the prior three months. Demand may increase by 250,000 barrels a day from the period before, backed by more industrial activity before the G-20 event, according to Yao Li, an analyst at SIA Energy, a Beijing-based consulting firm.

Still, the planned shutdowns for the G-20 meeting could exacerbate the effect from flooding last month. Raging waters across 11 Chinese provinces that account for more than a third of the country’s fuel use wreaked havoc on oil-product and gas pipelines, and may have reduced demand by about 100,000 barrels a day, according to Barclays Plc.

China’s total oil demand is estimated at 11.64 million barrels a day in 2016, making it the largest user after the U.S., according to the International Energy Agency. Consumption is expected to grow by 200,000 barrels a day from the year earlier, accounting for about 14 percent of global expansion, data from the Paris-based IEA show.

The Asian nation’s crude imports fell to the lowest level in six months in July, according to data from the General Administration of Customs. It received shipments from overseas at a rate of about 7.35 million barrels a day, the slowest pace since January.

Crude prices remain vulnerable. They entered a bull market last week, but that was less than three weeks after tumbling into a bear market amid concern that a global supply glut is persisting. While there’s speculation that informal OPEC talks next month may lead to action to stabilize the market and producers including Russia may discuss an output freeze, a similar plan proposed earlier this year didn’t end in an accord.

Brent crude, the benchmark for more than half the world’s oil, traded at $48.79 a barrel at 10:38 a.m. New York time on the ICE Futures Europe exchange. While futures are up about 30 percent in 2016, they are still more than 50 percent lower than mid-2014 levels. Their climb to the $100s earlier this decade was driven by China’s insatiable thirst for fuel, and their collapse two years ago came as the Asian nation’s economy slowed and global output peaked.

The factory output reductions for the G-20 meeting in China could eliminate about 400,000 barrels a day worth of crude processing at the nation’s refineries, according to Harry Liu, associate director for oil markets, midstream and downstream at IHS Markit Ltd.

“A number of major refineries will be required to cut back runs, therefore limiting a further rise in Chinese crude imports,” Liu said by e-mail.