EMERGING CLIMATE ACCORD COULD PUSH A/C OUT OF SWELTERING INDIA’S REACH... 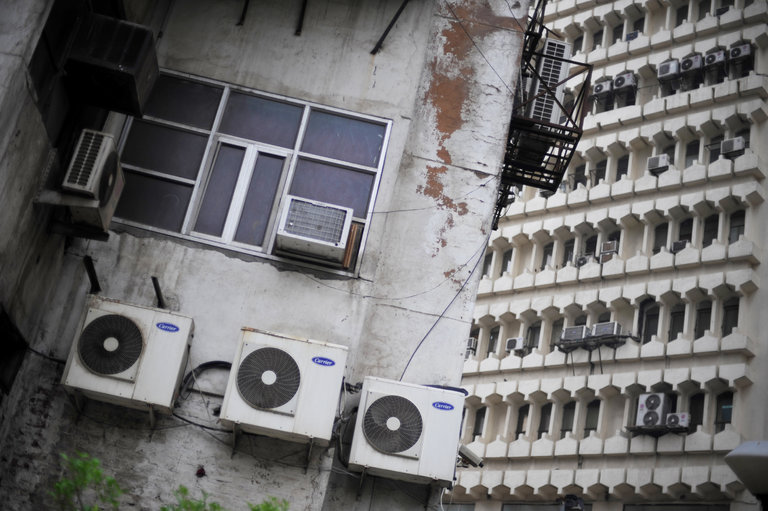 DELHI — A thrill goes down Lane 12, C Block, Kamalpur every time another working-class family brings home its first air-conditioner. Switched on for a few hours, usually to cool a room where the whole family sleeps, it transforms life in this suffocating concrete labyrinth where the heat reached 117 degrees in May...

“You wake up totally fresh,” exulted Kaushilya Devi, a housewife, whose husband bought a unit in May. “I wouldn’t say we are middle class,” she said. “But we are closer.”

But 3,700 miles away, in Kigali, Rwanda, negotiators from more than 170 countries gathered this week to complete an accord that would phase out the use of heat-trapping hydrofluorocarbons, or HFCs, worldwide, and with them the cheapest air-conditioners that are just coming within reach of people like Ms. Devi. Millions of Indians might mark the transition from poverty with the purchase of their first air-conditioner, but as those purchases ease suffering in one of the planet’s hottest countries, they are contributing profoundly to the heating of the planet.

HFCs function as a sort of supergreenhouse gas, with 1,000 times the heat-trapping potency of carbon dioxide. While they account for just a small percentage of greenhouse gases in the atmosphere, scientists say a surge in the use of HFC-fueled air-conditioners would alone contribute to nearly a full degree Fahrenheit of atmospheric warming over the coming century — in an environment where just three degrees of warming could be enough to tip the planet into an irreversible future of rising sea levels, more powerful storms and deluges, extreme drought, food shortages and other devastating impacts.

Related: How Bad Is Your Air-Conditioner for the Planet?

The emerging HFC ban, nearly seven years in the making, has not drawn the same kind of attention as last year’s Paris agreement on climate change. And the Kigali talks are focused on a narrow slice of the economy — just the HFCs in air-conditioners and refrigerators.

But the deal, which could be completed this weekend, could have as much or more of an effect on climate change. Unlike the Paris accord, the emerging Kigali agreement will have the force of international law, a legal requirement that rich countries give poor countries money to help them comply, and trade and economic sanctions against countries that do not.

President Obama has sent Secretary of State John Kerry and Gina McCarthy, the Environmental Protection Agency chief, to Kigali to push for a rapid global phaseout. Mr. Obama hopes to lean on the friendship he has carefully cultivated with Prime Minister Narendra Modi of India, and to create one final major piece of his climate change legacy.

But there is no guarantee that Mr. Modi will give Mr. Obama the deal he wants. The president’s rapid timeline pits the planet’s richer, cooler countries against poorer, hotter ones. And among the latter, none has more at stake than India, whose strong economic growth means tens of millions of families will soon be able to afford air-conditioning.

“Both Obama and Modi understand that we’re going to have to have a viable answer to the typical business owner and consumer as to why this is not going to come on the backs of increased costs and burdens for them,” said Brian Deese, Mr. Obama’s climate change adviser.

Between 6 and 9 percent of Indian households use air-conditioning, and the purchase of a first unit — not a second or a third — is driving growth, said Ajay Mathur, the director general of the Energy and Resources Institute in New Delhi. Every time government salaries are raised, he said, air-conditioner purchases surge, as civil servants gain confidence that they will be able to pay higher electric bills.

“It is me of 10 years ago. It is many of my younger colleagues,” Mr. Mathur said. “It is my driver, who after 20 years working for me, bought his first air-conditioner. It is a marker of social mobility.”

But a new global deal committing the world to a rapid phaseout of HFCs, Mr. Mathur said, would mean that many Indians would never “be able to get the benefits that go with air-conditioning.”

A fast phaseout comes with big wins for the United States, since many of the replacement chemicals are manufactured by American chemical companies like Dow and Honeywell. But those manufacturers concede that they are more expensive than HFCs.

“The replacements are more flammable and toxic,” said Stephen Yurek, the president of the Air-Conditioning, Heating and Refrigeration Institute, an advocacy organization. “So there is a need to make sure the equipment is better designed and maintained, a need to make sure that when it is installed, it is done correctly and safely. You need better-trained people to do all that, and that will be more expensive.”

The cost to India of phasing out HFCs by 2050 could range, depending on the mitigation plan, from around $13 billion to $38 billion, according to a study by the India-based Council on Energy, Environment and Water.

At this week’s talks, developed countries led by the United States have proposed to require developing countries to freeze HFC production and use by 2021, phasing down to about 15 percent of 2012 levels by 2046.

Developing nations in the hottest corners of the world, led by India, say that making the transition so quickly would be too costly. The Indian proposal would delay developing countries’ freeze of HFC use until 2031. By 2050, it would phase down to about 15 percent of 2029 levels. That would likely still leave a much higher level of HFCs in the atmosphere, since the 2029 HFC levels are expected to be much higher than those in 2012.

But a compromise solution is not just a matter of meeting in the middle. Experts say that it is crucial to ban HFCs before the Indian air-conditioning boom begins.

During the 1990s, 5 percent of urban residents in China owned air-conditioners. A decade later, it was nearly 100 percent.

India has three times the number of high heat-index days as China, and the surge in air-conditioning purchases will be far greater, Mr. Shah said. In a study published last year, he projected that the tipping point for India’s air-conditioning market will come between 2020 and 2023.

“The idea is to get the best air-conditioner technology in place before this happens,” he said. “Otherwise, you’ll have these HFC air-conditioners locked in place for another decade.”

In Burari, the Delhi neighborhood where Ms. Devi lives, and which Kamalpur is a section of, air-conditioning signifies both arrival and investment in the future. Homeowners here are mostly migrants from mountainous north India who work as government clerks or drivers and are investing heavily in their children’s English-language education.

S.S. Pathak, a bank manager, said he installed air-conditioning so his children, who are studying for medical school entrance exams, could manage late-night study sessions without nodding off or being devoured by disease-carrying mosquitoes.

Sandhya Chauhan and her family live in two musty, windowless subterranean rooms, which turn stifling on summer nights, leaving six sweat-soaked adults to fidget, toss and pace until morning. They have lived there for 20 years, unable to find other lodging on the household’s combined earnings of around 30,000 rupees a month, or less than $450.

But it was never as awful as this May, when temperatures crept so high that Ms. Chauhan’s friends speculated that the earth was colliding with the sun. After a doctor warned Mrs. Chauhan that heat exhaustion was affecting their oldest son’s health, her husband bought an air-conditioner on credit. Though they are hardly middle class — “we have never let this thought cross our minds,” Mrs. Chauhan said — the purchase has changed the way they see themselves.

Among the changes that have come with increasing wealth, Ms. Devi said, is the confidence to spend on the family’s comfort, rather than squirreling every bit of savings away.

“Education is teaching people to take care of themselves,” she said. “Now that we are used to air-conditioners, we will never go back.”