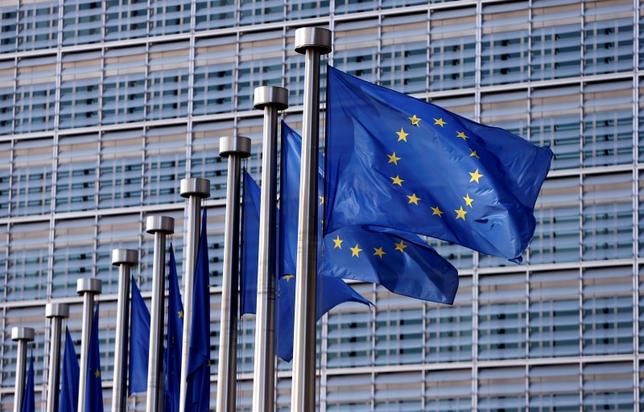 European Union flags flutter outside the EU Commission headquarters in Brussels, Belgium, April 20, 2016.
Reuters/Francois Lenoir
The European Union called on its 28 member states on Wednesday to speed up ratification of the Paris climate accord so the bloc is not left behind in an international push to curb global warming...

The EU executive, as a separate party to the agreement in addition to the member states, laid out its procedure for ratification on Wednesday, a process which will require approval by the European Parliament and EU leaders.

But the timeline for doing so remains unclear. The EU, with some 10 percent of global emissions, wants to lead the fight to cut greenhouse gases, after being a key actor in the negotiations leading to the Paris deal last December.

Ratification in Europe, however, entails a tortuous process that needs to be taken in parallel both at the EU level and at the national level, where each member state has different rules.

"We are determined to maintain the momentum and spirit of Paris and ensure the early ratification," EU Commissioner for Climate Action and Energy Miguel Arias Cañete said in a statement.

At least 55 nations representing 55 percent of man-made greenhouse gas emissions need to ratify for to take effect. Some experts predict that could be reached in 2017, with India, China and the United States saying they aim to join this year.

EU ministers will now discuss the bloc's procedure for ratification at their quarterly gathering on June 20.

Hungary is the only EU nation so far to ratify. France said it would formally sign the Paris accord on Wednesday, making it the first major industrialized nation to ratify the landmark deal.

The EU as a whole, however, is seen to be lagging.

Many EU member states are reluctant to move to ratify before the bloc agrees in what is expected to be a tough debate on how to share out the burden of cutting its emissions.

That debate will begin in earnest next month when the European Commission proposes individual member state emissions targets for achieving its Paris pledge to cut emissions by 40 percent below 1990 levels by 2030. It could take around 18 months to reach an agreement.

"The EU and its Member States will need to move swiftly if the bloc is indeed to become one of the first 55 parties," Stephanie Pfeifer, head of the Institutional Investors Group on Climate Change (IIGC), said in a statement.