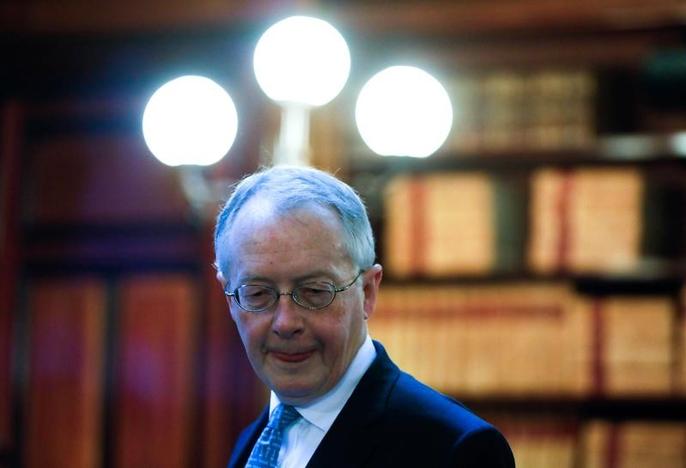 Myron Ebell, who leads U.S. President Donald Trump's Environmental Protection Agency's transition team, waits before holding a speech at the Solvay library in Brussels, Belgium February 1, 2017. REUTERS/Yves Herman -
Faced with a U.S. retreat from international efforts to tackle climate change, European Union officials are looking to China, fearing a leadership vacuum will embolden those within the bloc seeking to slow the fight against global warming...

While U.S. President Donald Trump has yet to act on campaign pledges to pull out of the 2015 Paris accord to cut greenhouse gas emissions, his swift action in other areas has sparked sharp words from usually measured EU bureaucrats.

When Trump's former environment adviser, until the president's inauguration this month, took to a stage in Brussels on Wednesday and called climate experts "urban imperialists", a rebuke from Britain's former energy minister drew applause from the crowd packed with EU officials.

But with fault lines over Brexit, dependence on Russian energy and protecting industry threatening the bloc's own common policy, some EU diplomats worry Europe is too weak to lead on its own in tackling climate change.

Instead, they are pinning their hopes on China, concerned that without the backing of the world's second-biggest economy support for the global pact to avert droughts, rising seas and other affects of climate change will flounder.

"Can we just fill the gap? No because we will be too fragmented and too inward looking," one EU official, involved in climate talks, told Reuters. "Europe will now be looking to China to make sure that it is not alone."

The EU's top climate diplomat Miguel Arias Canete will travel to Beijing at the end of March, EU sources said. Offering EU expertise on its plans to build a "cap-and-trade" system is one area officials see for expanded cooperation.

Enticed by huge investments in solar and wind power in economies such as China and India, Germany, Britain and France are seeking closer ties to gain a share of the business.

But hurdles stand in the way of an EU clean energy alliance with China after the two sides narrowly averted a trade war in 2013 over EU allegations of solar panel dumping by China.

"If America won't lead then it's clear that China will."

'WE LOST A MAJOR ALLY'

That agreement, which looks to limit the rise in average global temperature to "well below" 2 degrees Celsius compared with pre-industrial levels, entered into force late last year, binding nations that ratified to draft national plans to reduce greenhouse gas emissions.

But despite Beijing's green policy drive, propelled by domestic anger over smog and the environmental devastation wrought by rapid economic growth, some EU officials are skeptical it can pull as much weight as the United States on climate issues.

"We will make a lot of noises (about allying with China), but let's be honest we lost an ally - a major one," a senior EU energy diplomat said, speaking on condition of anonymity. "China's biggest issues are domestic ... It's clean water, air and food."

When the United States last took a step back on climate diplomacy, giving up on the 1997 Kyoto protocol on CO2 emissions under former U.S. President George W. Bush, Europe assumed leadership of global negotiations to cap planet warming.

It is among the first now to legislate on how to spread the burden among its member nations of its promise to cut emissions by 40 percent by 2030.

Talks are tough, though, particularly for coal-dependent nations such as Poland, and EU officials fear climate scepticism in the Trump administration may slow efforts.

"This may give the perfect excuse to a number of countries like Poland," another EU official said. "The deal has always been that we move when the big players (the United States and China) move."

Others are more sanguine, saying a U.S. retreat would dent, but not destroy, the current global momentum in tackling climate change - not least because cities, businesses and civil society are driving for change as much as governments.

"If the U.S. doesn't play the game, that's a problem. But it's a trade problem," an EU diplomat said. "Maybe European business will win out."

To date, there has been no sign that any other country is preparing to pull out of the Paris agreement. Days after Trump's election, almost 200 nations at the Marrakesh annual U.N. talks agreed a declaration saying that tackling climate change was an "urgent duty".