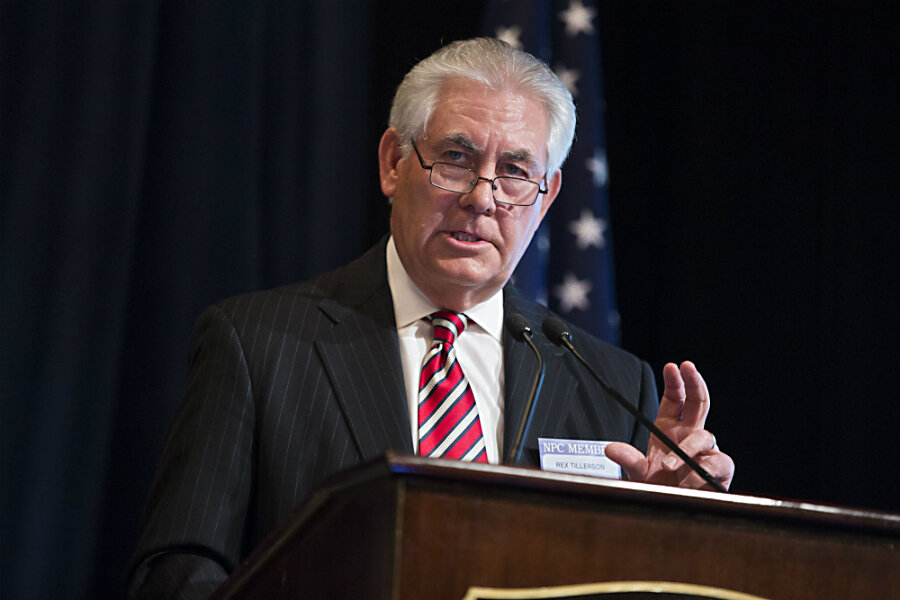 Secretary of State-designate Rex Tillerson speaks in Washington in 2015. As CEO of ExxonMobil, he supported the Paris climate change agreement. Evan Vucci/AP/File

The team includes an Energy nominee who knows wind power can work, a State Department nominee who has supported the Paris climate deal, and an Interior nominee who's not big on selling off federal lands...

That message has seeped through Donald Trump’s own speeches and tweets. It echoes in the views of some close policy advisors and financial backers. And it’s corroborated in key cabinet picks from fossil-fuel states.

But if that broad pattern is clear, the Trump worldview on energy is in some ways anything but a foregone conclusion. Scratch beneath the surface, and the signals coming from the Trump transition are about eclecticism, apparent contradictions, and an uncertain policy agenda that largely remains to be written.

Those policies all collide with separate blueprints released by the Competitive Enterprise Institute, whose energy director leads Mr. Trump’s Environmental Protection Agency transition, and by the House Freedom Caucus, a collection of far right Republicans. The ideological adherents to those groups were among the first to support Trump’s run for the presidency.

And the policy views of cabinet officers will matter.

“Personnel is policy, everywhere and at all times,” Mike McKenna, an energy lobbyist who formerly led Trump’s Energy Department transition team until the president-elect banned lobbyists, says in an email.

While policy generally comes from the top, the dynamics create a confusing picture of what Trump intends to pursue on energy and the environment. Partly, this may reflect the learning curve ahead for Trump. It’s also not yet clear whether it will be him or his Cabinet picks steering policy.

“With the presidency of Donald J. Trump, we are just moving into uncertainty across the board. He is without precedent,” says Joe Barnes, an energy geopolitics expert and research fellow at Rice University’s Baker Institute for Public Policy.

It’s not that Trump is a blank slate on energy.

He has telegraphed plans to remove regulations that crimped fossil fuel jobs, and much of his policy will head in that direction, says Nick Loris, an energy fellow at the conservative Heritage Foundation. But some of the finer details might come as agency heads fill out their staffs.

“Not to make this sound like a Russian nesting doll, but now it’s part of their jobs to find people who have intricate knowledge of these programs and these agencies,” he says.

“You’ve got a candidate who made promises to revive coal within an administration that now has a number of people in senior positions who worked in the gas and oil industry – and the gas side of it, that’s what killed coal,” says Josh Freed, vice president of clean energy at the nonpartisan think tank Third Way.

He says the incoming president has much to learn – or be taught – on energy and environment policy.

The Cabinet picks present their own inherent contradictions.

Consider Mr. Perry. When the Republican ran for president in 2012, he advocated eliminating the department he now could run (though, when asked in a debate which three departments he was pledging to erase, he infamously forgot the Energy Department). Perry also has no experience on nuclear safety issues, which accounts for a bulk of the department’s budget.

At the same time, Texas under Perry’s 14 years as governor also included: developing one of the most aggressive renewable electricity mandates in the country; becoming the nation’s top wind power state; investing in the electric grid in an unprecedented way; and applying for Energy Department grants to support projects within the state. [Editor's note: The duration of Perry's time as governor has been corrected in this paragraph.]

Meanwhile, Trump has lambasted wind and solar power as “very, very expensive,” though he has show an interest in nuclear.

“Perry knows that wind works, that the technology works. He knows that the prices are very different than what the president-elect has been saying. The Texas system has been able to incorporate wind easily and he knows that the stories that Trump has been saying about [massive killing of] bats and birds are blatantly false,” says Jim Marston, who runs the Environmental Defense Fund’s Texas office.

“If he’s confirmed, can he – will he – educate the president who has nominated him? Or will he just float out there and not correct him?” Mr. Marston asked.

That doesn’t mean Perry is all about renewables. Marston says Perry rejects and ignores climate science, and signed a deal to fast-track coal power plant construction to aid a utility that had donated to his campaign (courts later ruled the move illegal).

EPA may align with Trump pledges

If environmental groups are going to marshal their forces to nix any one nominee, it’s Scott Pruitt, the Oklahoma attorney general tapped to run the Environmental Protection Agency. Mr. Pruitt, who is skeptical of human-caused climate change and has sued the Obama EPA on a range of regulations, appears most closely aligned with Trump’s campaign statements.

“When President Trump sits down with his Cabinet there’s going to be no shortage of oil interests in the room,” says Jeremy Symons, associate vice president for climate political affairs with the Environmental Defense Fund. “At a minimum we need an EPA administrator who is willing to bring public health and the environment perspective in the discussion. And instead we have Pruitt.”

Although the EPA will have a crucial role to play on climate policy, so will the State Department, given its role in international treaties such as the Paris climate agreement.

And the nominee for secretary of State, Mr. Tillerson, is notably the only person charged with any sort of energy responsibility in Trump’s prospective Cabinet who has said human beings are driving climate change.

Tillerson has defended the international climate change agreement that Trump vowed to “cancel” on the campaign trail. Trump has more recently said he has an “open mind” on the agreement and that he is “studying” it.

While Tillerson promoted the climate deal and the idea of taxing carbon emissions to address global warming, that was during a Democratic presidency and when polls showed Democratic nominee Hillary Clinton with an edge.

Indeed, Tillerson is hardly a climate crusader. For one thing, his firm in the 2016 cycle donated nearly 10 times as much to Republicans, who as a party have consistently resisted legislative efforts to slow climate change, as to Democrats.

Oil companies also haven’t been bashful about their motives for supporting the Paris deal and a carbon price: A moderate-to-weak carbon price would make the natural gas many of them also develop more competitive with coal, its more carbon-intensive rival in the electricity sector.

But Tillerson has the most accurate pulse on where the private sector as a whole – not just oil firms – is heading on energy issues, says Mr. Barnes at Rice University. That could have a measurable effect on how Trump approaches a range of climate change and energy issues, if he’s open to suggestion.

“Renewables are here to stay. Natural gas will almost certainly continue to displace coal. A big program on nuclear energy is going to be very, very hard – it’s not even certain it makes economic sense,” Barnes said. “We’re not going to go back 20 years. A lot of the major oil companies have sort of understood and accepted that the world energy mix is changing.”

Even the ideological thread in the Trump Cabinet is hard to follow after the nomination of Representative Zinke to lead Interior. That move signaled there’s less purity than originally assumed, at least according to conservatives who fit more in the tea party mold.

Zinke has defended maintaining federal lands; many on the far right want to sell off more federal lands to the states or private owners. That’s a stark contrast from GOP Washington Rep. Cathy McMorris Rodgers, who was also considered for the Interior post and who supports whittling down the federal estate. Zinke also backs the Land and Water Conservation Fund, a program that pays for federal conservation protection that tea party backers oppose.

“I’m having a more difficult time piecing it together now more than ever with this pick,” says Mr. Loris at the Heritage Foundation. “With McMorris, it seemed like a pretty clear line that there would be a lot less federal intervention. But with Zinke, he has been really supportive of the Land and Water Conservation Fund and more skeptical on devolution.”

Even some environmental groups with a sportsmen bent to them have signaled they’ll support, or not oppose, Zinke’s nomination based on those factors.

“I’m not sure that everyone is going to be opposed on Interior,” says Mr. Symons at the Environmental Defense Fund, though he noted his group has concerns about Zinke, who has promoted developing more coal, encouraging energy production on Indian lands, and easing oil and gas pipeline construction through Interior land.

“I have a hard time finding patterns” beyond Trump team’s support for fossil fuels, Symons says. “People are asking me all the time to explain the connections, and I don’t know. I can’t get inside the thinking.”

Zack Colman
@zcolman
source: http://www.csmonitor.com/
original story HERE
If you would like to share this blog story on Facebook with one easy click, scroll down to the very bottom of this page and look for the SHARE button along with the Facebook LIKE button under the "Sign up to Learn About & Help End Global Warming" area where people enter their email address. You do not need to enter any email address to use the one click SHARE button.
Get more of The Global Warming Blog. Bookmark this page and signup for the blog’s free RSS Feed. Sign up for free Global Warming Blog by clicking here. You will automatically be emailed a regular summary of the latest global warming headlines.
To learn about more about global warming, climate change or greenhouse gases as well as the causes, consequences, solutions, definitions, facts and tipping points related to these subjects, click here.
To see our most current positions, opinions, comments, agreement or disagreement with this article, and/or possible criticisms related to the subjects or facts raised in the above article, click here.  Then look for those subjects in the navigation links at the top the page.
To sign a critical petition for declaring an international global warming State of Emergency, click  here!