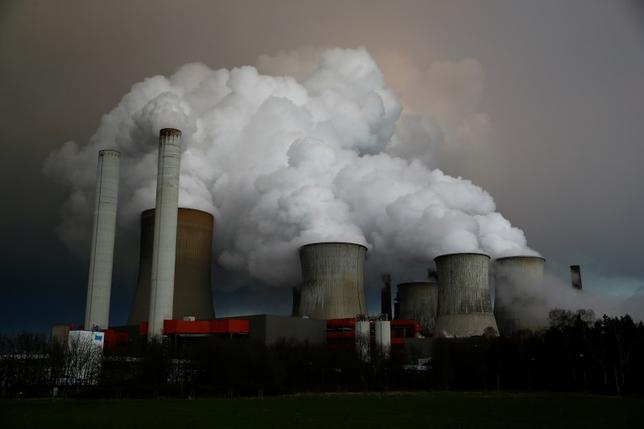 Steam rises from the cooling towers of the coal power plant of RWE, one of Europe's biggest electricity and gas companies in Niederaussem, north-west of Cologne, Germany. Picture taken March 3, 2016. Reuters/Wolfgang Rattay
Germany has abandoned plans to set out a timetable to exit coal-fired power production and scrapped C02 emissions reduction goals for individual sectors, according to the latest draft of an environment ministry document seen by Reuters on Wednesday...

An earlier version of the draft document that was leaked in May had suggested that Germany should phase out coal-fired power production "well before 2050" as part of a package of measures to help Berlin achieve its climate goals.

The new version, which was revised following consultation with the economy and energy ministry, has also deleted specific concrete C02 emissions savings targets for the energy, industry, transport and agriculture sectors.

The document forms the government's national climate action plan for 2050 and lays out how it plans to move away from fossil fuels and achieve its goal of cutting CO2 emissions by up to 95 percent compared to 1990 levels by the middle of the century.

The original proposals met with hefty opposition from unions, coal-producing regions and business groups who said it would cost jobs and damage industry.

"Seven months after the successful climate summit in Paris the government is capitulating to the interests of the fossil fuel industry and missing the chance to give the economy a modernization impulse by presenting clear plans," he said.

Another suggestion for an additional levy on petrol, heating oil and gas to increase demand for green technologies has also been scrapped, according to the document. However, the document does still mention plans for an ecological tax reform.

An alternative paragraph that said Germany would consider lobbying for the introduction of a minimum price on European carbon-dioxide emissions has also been taken out of the document.

The draft, which still needs to be rubber-stamped by other ministries, is now in the Chancellery. It is due to be debated by the cabinet in September.

by Markus Wacket and Caroline Copley; Editing by Alexandra Hudson