A woman searches for dry land after a flood in Bangladesh, a country already affected by cyclones, floods and drought Probal Rashid

Dr Gavin Schmidt, director of Nasa’s Goddard Institute of Space Studies, describes suggestions that climate change had slowed down or stopped as ‘delusional’ and ‘bunk’...

The idea that global warming “paused” has been comprehensively refuted by the record warm temperatures over the last three years – and the rate of increase could soon start to accelerate, a leading Nasa scientist has warned.

Dr Gavin Schmidt, director of Nasa’s Goddard Institute for Space Studies, said some people had been “confused” by temperatures that were below the average rate of increase, mistaking what was simply a blip as the sign of a long-term trend.

But the last three years have each seen successive, record average global temperatures, according to Nasa’s figures, partly fuelled by the natural El Nino effect, but mostly because of human-induced climate change.

This, Dr Schmidt said, was “almost certainly” just another blip as random factors take temperatures above the average rising trend, which remains virtually the same as it has since the late 1990s.

But he also said the rising amount of energy being put into the atmosphere and oceans as a result of greenhouse gas emissions had led scientists to believe the pace of global warming would get faster over the next decades.

Writing on the Real Climate website, Dr Schmidt asked himself whether he had to “mention the ‘pause’”.

“Apparently yes,” he said. “The last three years have demonstrated abundantly clearly that there is no change in the long-term trends since 1998.

“A prediction from 1997 merely continuing the linear trends would significantly under-predict the last two years.

“The difference isn’t yet sufficient to state that the trends are accelerating, but that might not be too far off.” 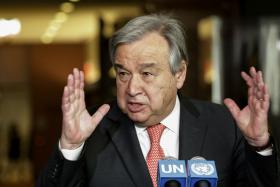 He said it was perfectly reasonable for scientists to analyse variations in climate on a yearly basis.

But he added that the figures “should serve as a reminder that short-term variations should not be conflated with long-term trends. One is not predictive of the other”.

Speaking to The Independent, Dr Schmidt said discussions about annual changes in temperature before the record warmth of the last three years had been exploited by some in a reference to those known as “sceptics” or “deniers”.

“The whole thing was somewhat delusional from the beginning.

“So this notion that global warming has stopped was bunk from the start.”

While he said the recent high temperatures were equally likely to be statistical noise, studies of how much extra energy is being absorbed by the atmosphere and particularly the oceans suggest global warming is going to gather pace over the next 20 years or so.

“The fact there’s more energy coming into the system than is leaving, we think that’s increasing over time,” Dr Schmidt said.

“The larger that difference gets, the faster we think things will warm. We’re anticipating an acceleration of temperature changes on a multi-decadal time scale.”