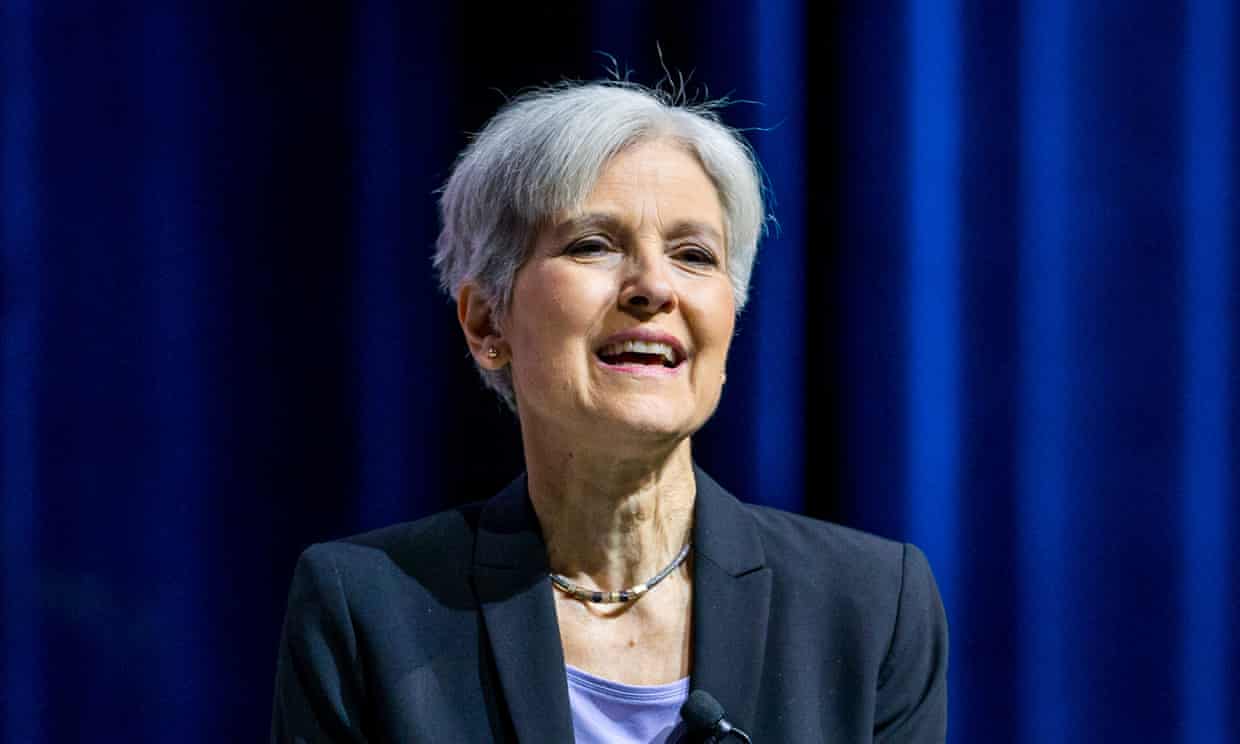 Jill Stein: ‘We need to acknowledge the true state of emergency we’re in.’ Photograph: MediaPunch/Rex/Shutterstock

Presidential hopeful points to California wildfires and Louisiana flooding in push for Green New Deal to address both environment and economy...

Dr Jill Stein called for a national state of emergency to be declared over the rapidly worsening effects of global warming, during a campaign swing through New York.

Promoting her party’s Green New Deal – an agenda designed to address the interconnected problems of climate change and the economy – Stein said the still uncontained Blue Cut fire in California and the record flooding in Louisiana were ample evidence of the worsening effects of climate change.

'The only other option': Bernie Sanders backers turn to Green party's Jill Stein...

“We need to acknowledge the true state of emergency we are in,” Stein said. “The fires in California and floods in Louisiana are going to become day-by-day occurrences, and, within our lifetimes, there is going to be potentially catastrophic sea-level rise.

“We need to ensure that these disasters do not become a daily way of life for all Americans and people all over the world,” she said, “and this is why we need to declare a climate state of emergency so that we can respond in real time in the ways that we need to.”

In poll after poll, Stein added, the American people say they want substantial action on climate change that meets the severity of the crisis. She called for empowering Americans to instruct their elected officials – namely Congress – to act in their interests, not in the interests of lobbyists.

Stein remarked that she was astonished to be witnessing a Republican party that appeared to be “unravelling at the seams”. But she also warned that Democrats were moving to the right.

Salazar, she said, is widely considered a reliable friend to the oil, gas, ranching and mining industries. As interior secretary, he opened the Arctic Ocean for oil drilling, and oversaw the response to the BP oil spill in the Gulf of Mexico.

Since returning to the private sector, she said, Salazar had become “the lobbyist’s lobbyist – a man who strongly supports fracking, is in favor of the [Keystone XL] pipeline and likely to ensure such projects are approved in the future, and supports the Trans-Pacific partnership”.

“So when people say: ‘Hasn’t the Democratic party moved to the left?’ – well, talk is cheap. His appointment unveils the real Hillary Clinton who would take office. We’re seeing how much faith people should put into the new vision of the Democratic party. It’s a case of buyer beware. ”

The Green party nominee, currently polling as high as 6% but well below the 15% threshold required for a podium position in the coming presidential TV debates, said declaring a state of emergency would address two related crises in the climate and the economy.

Part of the solution would be the Green New Deal, a plan that would rapidly create 20m new jobs, lead to a sustainable economy and transition the US to 100% clean energy by 2030.

The New Deal, Stein said, would help revive the economy, turn the tide on climate change and make wars for oil obsolete. “When you have 100% renewable energy, you do not need and you cannot justify a military budget that distributes soldiers and weapons all around the world.”

The plan includes “restoring critical infrastructure, including the ecosystem, cleaning up rivers and waterways, restoring our wetlands and forests and ensuring that we have water systems for our communities that are not toxic”.

Part of the program, she added, would be to call for a complete ban on new fossil fuel and nuclear infrastructure. Communities dependent on coal or fracking would be assured that jobs would be replaced before they were laid off.

Stein estimates the costs of the transition would be completely offset by the money saved by not using fossil fuels. The savings, she suggested, would include billions of dollars related to healthcare costs from asthma, emphysema, heart attacks, strokes and cancers related to exposure to fossil fuels.

The party’s vice-presidential nominee, Ajamu Baraka, also appeared at the event. A longtime human rights activist, he told the gathering that participatory job creation and planning was paramount in the development of a Green New Deal economy. “It’s imperative that the people are direct participants,” he said. “It’s a principle that this party and this campaign stands for.”

But getting the Greens’ message out remains problematic. The party’s message on climate has been repeatedly overshadowed by Stein’s controversial comments on the government’s regulatory oversight of vaccines, drawing accusations that she has associated herself with the discredited “anti-vaxxer” movement.

Stein, a Harvard-educated physician, has both cited the proven importance of vaccines, noting that they save lives and have eliminated devastating diseases, and suggested that Americans cannot trust the people who recommend widespread vaccination.

Jill Stein dismisses perception she is anti-vaccines as 'ridiculous'...

Responding to criticisms last month, she said her concerns were about the influence of corporations on government, but they also seemed to echo the concerns of anti-vaccination campaigners that compromised or influenced regulators could open the door for dangerous medicine.

“As a medical doctor, of course I support vaccinations,” she tweeted. “I have a problem with the FDA [Food and Drug Administration] being controlled by drug companies.”

But on the campaign trail, Stein largely limited her remarks to concerns over climate change. She proposed introducing a carbon tax of $60 a ton that would yield around $360bn annually and increasing the estate tax to its level during the Reagan administration. Her proposals, she argued, were now a necessity.

“Each month now, we’re seeing records set for climate change and global warming. Science is telling us that the day of reckoning is coming closer. This is not something that can wait another four years.

“We are in an existential moment where we have to decide if we want a future or not,” she said.