HOW CLIMATE CHANGE WILL DESTROY OUR GLOBAL HERITAGE... 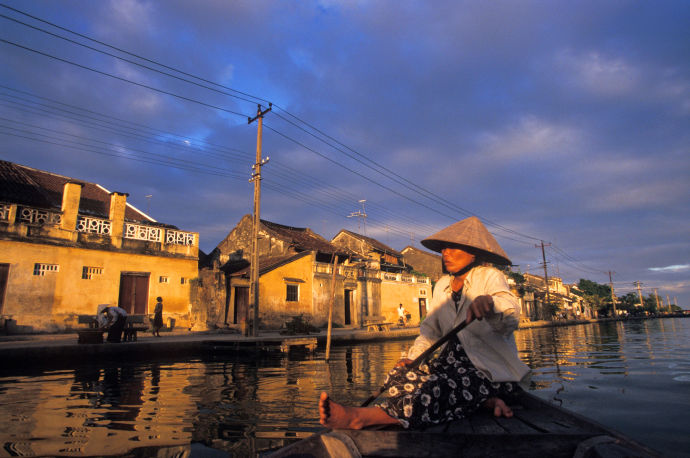 Hoi An, Vietnam. Credit: photograph by Jeremy Horner / Lightrocket / Getty
"UNESCO report’s concerns: the threat of climate change to the multibillion-dollar tourism industry, which, as the report notes, sustains economies in many parts of the world..."

ast week, the United Nations Educational, Scientific, and Cultural Organization issued a report called “World Heritage and Tourism in a Changing Climate.” It contains twelve case studies and eighteen snapshots of what climate change is expected to do to places that have been designated as UNESCO World Heritage sites. More than a thousand sites around the world have the UNESCO designation, which is awarded on the basis of “outstanding universal value,” or O.U.V., in U.N. bureaucratese; it’s something between a Michelin star and an Olympic medal, both a marketable touristic imprimatur and a reminder of both the aspirations and the limits of internationalism. And so the report, co-produced with the Union of Concerned Scientists, provides an eclectic set of postcards from our cataclysmic future.

In Venice, the rising water is “eating away at the substance of the buildings as damp spreads up the brickwork.” Statues are flaking and blistering, and mosaics in St. Mark’s Basilica are crumbling. Superstorm Sandy caused a hundred million dollars in damage to the Statue of Liberty, an experience that only highlighted its vulnerabilities. Higher and stronger waves could topple statues on Easter Island. Flash floods are expected to hit Stonehenge.

At times, the report reads like a guide to places that have been lost, then found, and, any minute, will be lost again. The medieval ksour, or caravan town, of Chinguetti, in Mauritania, which has stores of ancient manuscripts, is being threatened both by the encroachment of sand dunes and by sudden, violent rainstorms. The kurgans, or frozen tombs of the Scythian warriors who rode on horseback from the Black Sea to Mongolia two thousand years ago, may fall apart as the permafrost in Russia’s Altai Mountains thaws. The tombs and their artifacts, made of gold and leather, are among the only firsthand records of those people. Hoi An, a town in Vietnam with hundreds of buildings from the sixteenth and seventeenth centuries, is just two metres above the sea, near an eroding shore. Skara Brae, the remains of a five-thousand-year-old settlement in the Orkney Islands, may also be lost to the sea. Other neolithic sites in Britain will likely soon be undermined by a warmth-induced increase in small burrowing mammals. When all this will happen is a little unclear, but the report’s main message is that it’s sooner than one thinks. The ruins of Kilwa Kisiwani, a city that was founded in the ninth century in what is now Tanzania and stood for a thousand years, may be washed away before anyone gets around to excavating them. Many of the buildings there were made of coral, held together with limestone mortar. Present-day coral reefs, meanwhile, are dying off in ways that, as Elizabeth Kolbert has described, are painful to read.

Some of those reefs are also featured in the new report, such as those surrounding the Rock Islands of Palau. UNESCO conceives of wildlife as part of World Heritage. The flowers in South Africa’s Cape Floral Kingdom may wither and die, or fields of them may burn as the heat and drought lead to an increase in wildfires. A warmer current, which would keep certain sea life away from the Galapagos, could mean that the penguins there starve. The golden lion tamarin monkey, in Brazil’s Atlantic forest, may be swept away in landslides brought on by torrential rains. Climate can make a mockery of our efforts to safely set aside the things that we treasure. Yellowstone’s lakes are shrinking, and fires in the park are increasing.  The salt flats of northern Germany, where birds nest, may become indistinguishable from the sea. When that happened in the fourteenth century, salt prices spiked across Europe, contributing to the Famine of 1315, which has its own lessons to offer the present. Perhaps we are less vulnerable now, in a world of interconnected countries and economies, or maybe we are more so.

Indeed, reading the UNESCO report, it can be hard to tell where the borders are between the built and the natural worlds. Sometimes, they are jointly under threat. There are just eight hundred and eighty mountain gorillas left in the world; half live in Uganda’s Bwindi Impenetrable Forest, which is proving quite penetrable to diseases that are expected to spread more rapidly as the local human population nearby comes under pressure from climate change.

Among the report’s recommendations, which include making use of the latest scientific analyses and involving indigenous peoples, is one that goes to the heart of why we set aside these places to begin with, apart from their beauty: “Analyse archaeological data and cultural heritage to use what can be learned from past human responses to climatic change to increase climate resilience for the future.” We are going to need all the help we can get.

“We’re going to cancel the Paris Climate Agreement and stop all payments of U.S. tax dollars to U.N. global warming programs,” Donald Trump promised last week, in his “America First Energy Plan.” He has said that he thinks climate change is, essentially, nonsense. One might think that a man who makes money selling hotel rooms might have some interest in one of the UNESCO report’s concerns: the threat of climate change to the multibillion-dollar tourism industry, which, as the report notes, sustains economies in many parts of the world. (Politico reported that Trump’s golf course in Ireland has cited climate change in order to get a sea-wall-building permit.) Of the World Heritage sites that the report looked at, most would see a loss of visitors and the economic benefits that they bring. (Some already are.) There was only one site, UNESCO found, where the result could be “climate change actually helping to drive tourists to the destination.” That is Greenland’s Ilulissat Icefjord, where people are going to see how fast the glacier is melting.

Amy Davidson is a New Yorker staff writer. She is a regular Comment contributor for the magazine and writes a Web column, in which she covers war, sports, and everything in between.