HOW SUN, SALT AND GLASS COULD HELP SOLVE OUR ENERGY NEEDS... 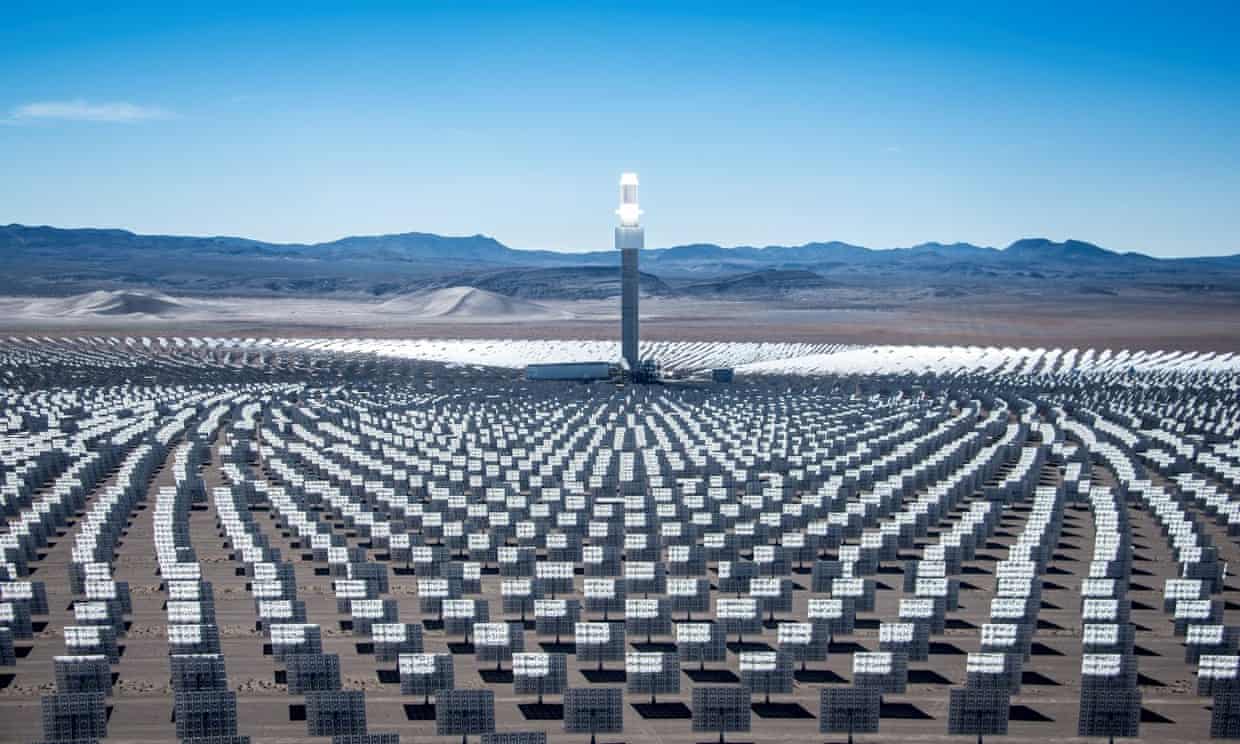 It looks like a set from a sci-fi epic, but this solar plant in the scorching Nevada desert has a far more practical purpose…

High in the stark Nevada desert, a couple of hundred miles north-west of Las Vegas, is the shimmering circular mirage of Crescent Dunes. Ten thousand silvery glass panes, each measuring 115 square metres, surround a tall central tower, which stands like a twinkling needle in the featureless landscape around it. Resembling a fabulous alien metropolis, Crescent Dunes is in fact a highly sophisticated, mile-and-a-half-wide solar power plant – “the next generation in solar energy”, according to Kevin Smith, one of the project’s founders.

The glass panes, which comprise a combined area of more than a million square metres, are not photovoltaic (PV) panels like those installed on rooftops and in solar farms worldwide. Instead, they are simply vast, multifaceted mirrors, which track the course of the sun like heliotropic plants. This field of mirrors harnesses and concentrates the blazing Nevada sunshine, directing it precisely towards the top of the central tower.

"It’s really an alternative to fossil fuel or even nuclear" Kevin Smith, CEO of SolarReserve

“The difficulty with photovoltaic is that it’s intermittent,” says Smith, who is CEO of Crescent Dunes’s parent company, SolarReserve. “When the sun goes down, you’re done.” Engineers have long sought methods of storing solar energy – in water, in batteries, in fluid-filled “parabolic troughs” – but Smith claims that Crescent Dunes demonstrates “the world’s most advanced energy-storage technology”, known as molten-salt storage.

The central tower secretes a reservoir of potassium and sodium nitrate – about 25,000 metric tonnes of it – heated in advance to 288°C, at which temperature the mixture is a clear, water-like liquid. This is circulated in narrow, thin-walled tubes, rising dramatically in temperature when exposed to the fearsome, concentrated sunlight at the top of the tower. “We heat it to 560°C,” says Smith, “it flows back down the tower and we capture it in a large tank.”

The molten salt efficiently maintains the heat and when the energy is required, it is converted to electricity through a conventional steam turbine. This set-up allows Crescent Dunes to provide power to 75,000 Nevada homes long after the sun has set and even, if necessary, 24 hours a day.Smith believes that concentrated solar power (CSP) is not simply a substitute for photovoltaic panels but a potential competitor to conventional fuels. “It’s really an alternative to fossil fuel or even nuclear. You couldn’t power a city with just PV and wind, but you could with CSP, because of the storage capacity.” SolarReserve is already developing cheaper, higher-capacity installations and planning to build similar solar plants in South Africa, Chile and China.

Of course, the technology isn’t flawless: CSP can only efficiently operate in areas with intense, uninterrupted sunlight and birds can be burned and killed by the concentrated sunbeams. Nonetheless, Crescent Dunes emits no pollutants, uses a fraction of the water required to generate coal or nuclear power and occupies a smaller combined area than, say, a coal-fired power station. Assuming the technology proves sustainable and replicable, among the ancient mountains of the American west, a bright future may be under way.