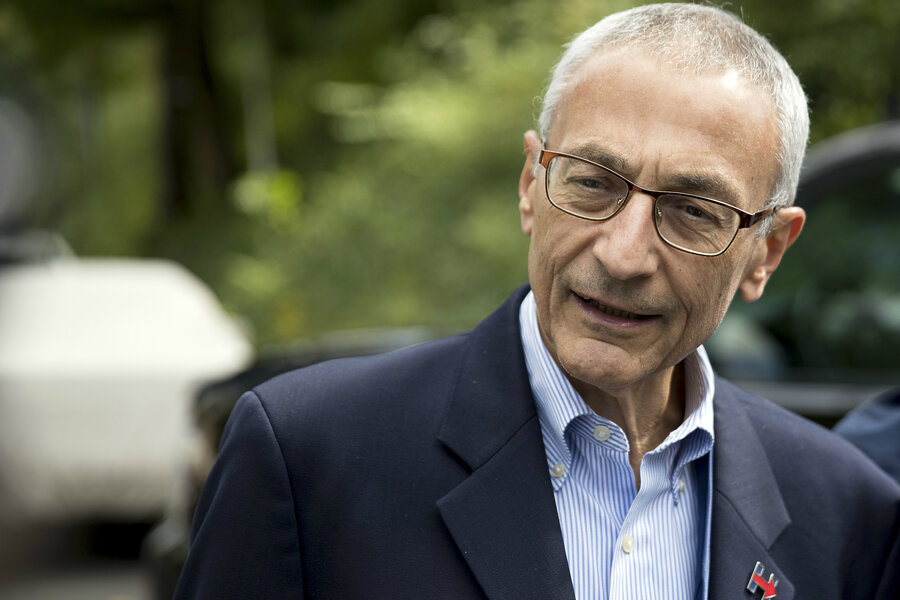 Hillary Clinton campaign chairman John Podesta speaks to members of the media outside Mrs. Clinton's home in Washington on Oct. 5. The WikiLeaks organization has posted what it said were thousands of emails from Podesta involving the Clinton campaign.  Andrew Harnik/AP

Hillary Clinton's campaign developed a policy plan favoring a new tax on carbon emissions, but later called the idea politically 'lethal,' according to documents made public by WikiLeaks...

October 22, 2016 Washington—Hillary Clinton’s presidential campaign considered advocating a carbon tax but ultimately steered away from the policy after polling revealed the idea was unpopular, according to a batch of emails released by WikiLeaks.

During the time when her campaign was investigating the idea, it would have aligned with some political currents in her own party: Primary challenger Sen. Bernie Sanders stumped early for a tax on carbon emissions, leaving Clinton little political space of her own on the matter. And the campaign's polling indicated supporting a carbon tax would cost her in the general election.

"On another matter, we have done extensive polling on carbon tax. It all sucks,” Clinton campaign chairman John Podesta said in a Jan. 7, 2015 email to Jake Sullivan, Clinton’s foreign policy adviser, according to the leaked documents.

Mrs. Clinton’s campaign did not respond to a request from the Monitor Friday to comment on the emails and her policies on climate change. Mr. Podesta has implied the legitimacy of at least some documents by saying on Twitter that he is "not happy about being hacked by the Russians.... Don't have time to figure out which docs are real and which are faked."

Though a politics-affects-policy storyline isn’t necessarily surprising, the documents lay out in sharp relief how sensitive climate policymaking is, even for Democrats.

The Clinton campaign’s resistance to back a carbon tax touches a growing rift on the left. Some more liberal elements within the Democratic Party want an aggressive climate policy in the mold of what Senator Sanders pledged.

Members of the Clinton team, too, apparently were calling early on for more substantial action. They floated a carbon tax in a December 2014 planning document titled “Climate Change Framing Paper." That paper, released by WikiLeaks this week, said that the Obama administration’s climate commitments were at the time "far from sufficient to meet the climate challenge.”

"Consequently, the next president will need to go beyond defending those measures already planned or in place,” the 19-page document said.

Clinton’s team eventually pursued a carbon price policy, even suggesting a $42 per ton price for carbon emissions in a March 2015 memo.

The aversion to a carbon tax grew, however, as the campaign got into full-swing. Campaign manager Robby Mook called the idea “lethal” in a June 2015 email, saying he didn’t want to draw attention to the matter to "give bernie contrast right now." A January email from energy adviser Trevor Houser urged the campaign to avoid “Bernie’s carbon tax fantasy fight."

Some advocates of climate action say all this shows Clinton missing a major opportunity to push for what many see as a sensible next step to reduce greenhouse-gas emissions.

Brad Johnson, executive director of Climate Hawks Vote, says Clinton and her allies underplayed the potential for sweeping Democratic victories this November that could have enabled passage of a carbon tax.

"This is, unfortunately, something that Hillary Clinton argued, all through the Democratic primary, wasn't going to happen,” he tells the Monitor by email. "And even more unfortunately, it's something that too many progressives and climate activists haven't been willing to envision as a possibility. This kind of defeatism can be self-fulfilling."

Other green groups, though, say they aren’t necessarily dismayed by the emails, even though Clinton's team eventually shelved the carbon tax. Short of a Democratic wave election, more Republicans must get on board with climate legislation to pursue a carbon tax anyway, says David Goldston, director of government affairs with the Natural Resources Defense Council Action Fund.

“I don’t think there’s anything surprising about the Clinton campaign having looked into a carbon tax,” Mr. Goldston says. “Clinton has been clear that she’s committed to climate action, including meeting the Paris goals, which will require building on the Obama Administration’s actions.”

Economists on the political Right, environmental organizations, and policy experts have all floated the idea of taxing carbon emissions as a potential bipartisan solution for curbing greenhouse gas emissions.

But a carbon tax is unpopular with many conservatives, as they see it as extending government control and raising prices for gasoline and electricity.

"Anybody who really understands the politics of what the deal will require in Washington, D.C., they understand it’s a fantasy and it will never happen,” says Dave Banks, a former George W. Bush adviser and current executive vice president of the American Council for Capital Formation.

The Clinton team was aware of these dynamics, as evidenced by the climate paper. The document explored a number of different political scenarios, such as how to position a carbon tax with the Clean Power Plan – a 2015 Obama administration rule to reduce electricity sector emissions – and how a tax compares to previous carbon price attempts, such as a cap-and-trade bill that passed the House in 2009 but fizzled in the Senate.

"A serious plan to price carbon would mark a departure from the Obama administration’s approach of relying primarily on its regulatory authority and would energize many people who care deeply about the environment. At the same time, it allows for an aggressive climate change strategy to co-exist with support for responsible domestic oil and gas development and energy exports, which most Americans support,” the document said. "Making a GHG (greenhouse gas) fee a central element of a climate policy will inevitably elicit traditional attacks from conservatives and fossil fuel interests, who will call it an energy tax and warn of skyrocketing electricity bills and domestic energy shortages."

While a carbon tax varies based on its design, the basic principle is that the government would levy a fee on carbon – likely increasing it over time – and either collect the revenues, use them for another purpose such as cutting taxes, or committing the money to measures that would further slash emissions.

The Clinton campaign was exploring funding a “middle class tax relief” or direct rebates to households on a “progressive basis” to aid low-income households dealing with the disproportionate effects of paying higher energy prices.