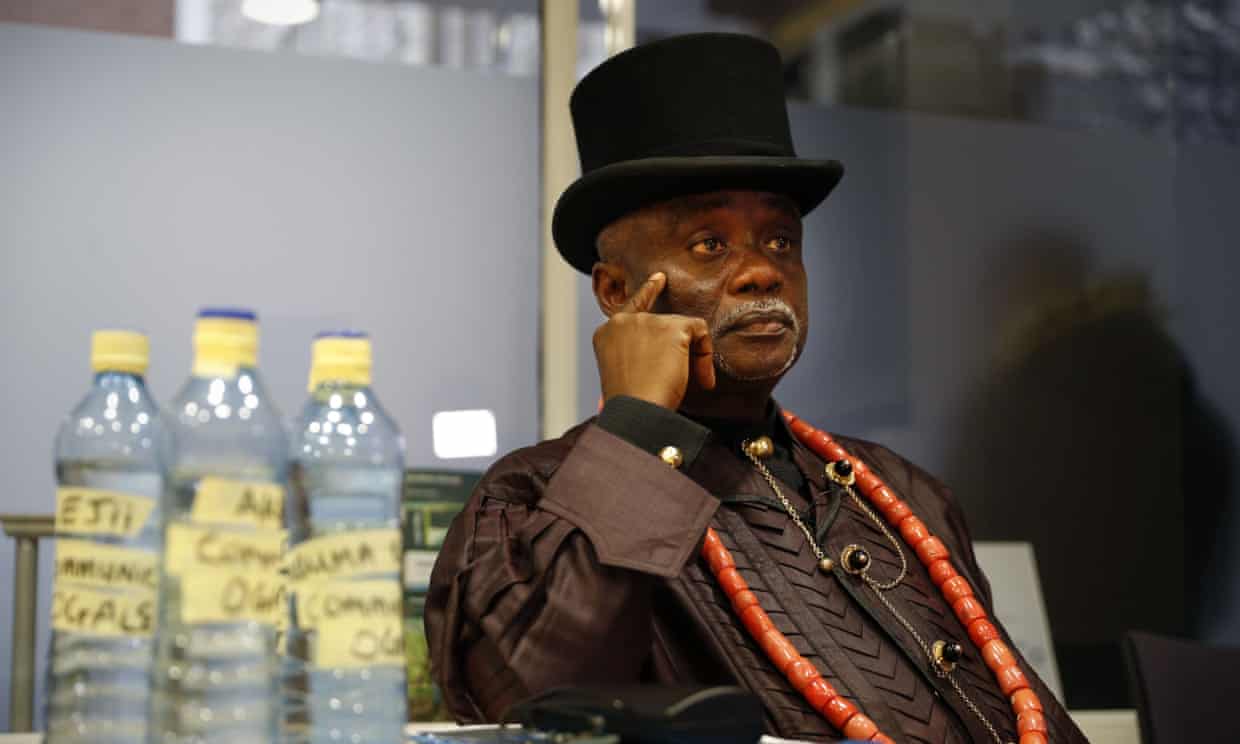 King Emere was in a London court last week for the case that he hopes will allow him to sue Shell in the UK for polluting his tribal land...

His Royal Highness Emere Godwin Bebe Okpabi, the paramount ruler and hereditary king of the Ogale community in the oil-rich Niger delta, is ready to explode. 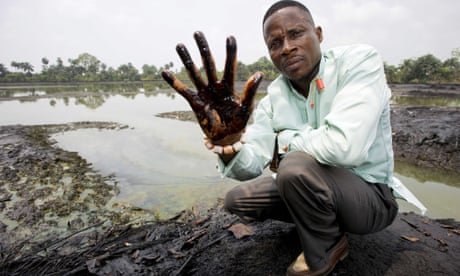 After nearly a week of sittting quietly in top hat and regal chains in the obscure technology and construction court in London listening to Shell, the Anglo-Dutch oil company, argue why 45,000 impoverished Ogalean farmers should not be allowed to sue the company in Britain for historical pollution, he says he feels “betrayed and saddened … I dispute everything they have said. To listen to Shell saying they have not been not responsible for the pollution in Ogale has been dreadful.”

King Emere wants to sue Shell in London for not cleaning up pollution because he fears his community may never get justice in Nigeria. “You can never, never defeat Shell in a Nigerian court. A case can go on for very many years. You can hardly get a judgment against [an oil company] in Nigeria. Shell is Nigeria and Nigeria is Shell.” 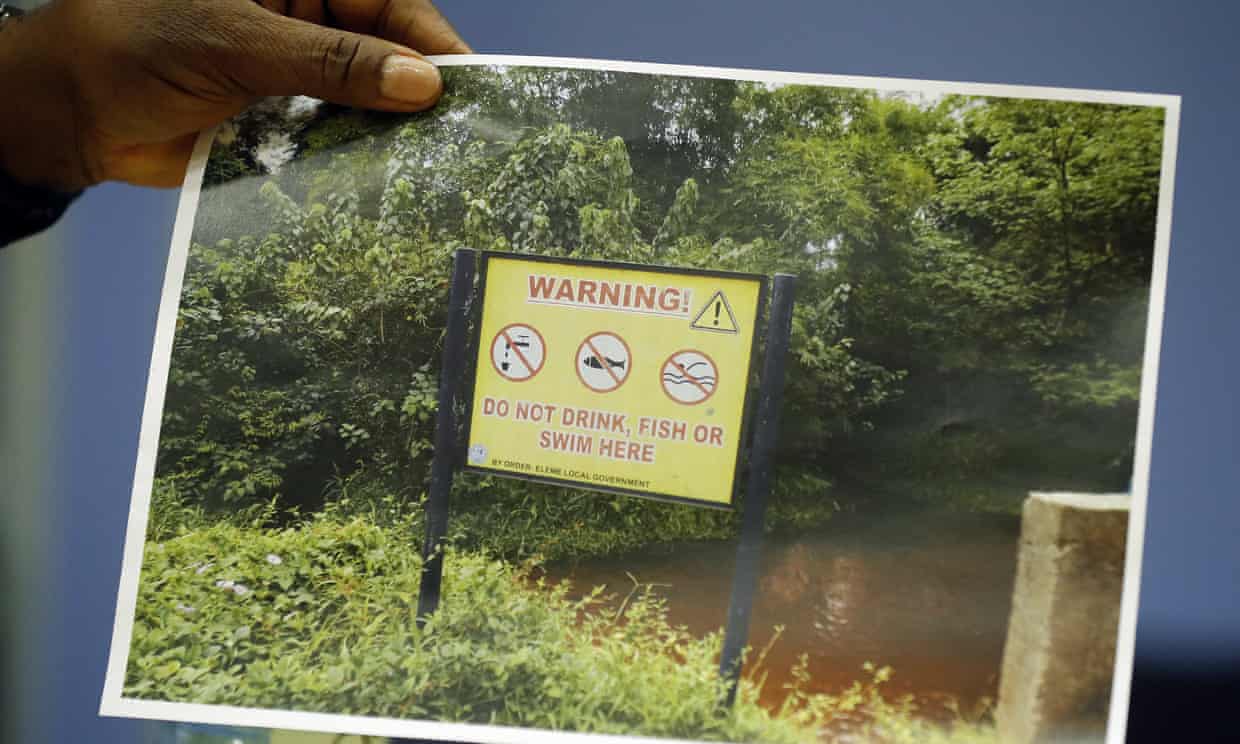 The stakes are high, he says. If the London judge hearing the preliminary arguments finds for the king then, in around one year’s time, Shell will have to defend itself in the British courts. The result could be a massive clean-up of Ogale, possibly millions of dollars’ in damages and other polluted communities bringing their cases to Britain.

The judge, who has nearly 1,000 pages of reports, submissions and statements from the two sides to consider will rule in the early new year. But if Shell wins, says the king, then the case will have to be heard in Nigeria where they may be able to avoid justice for decades because cases can get kicked between the appeal and supreme courts for many years.

“We are desperate people looking for justice. We know we cannot get justice there. A community near us got a huge judgment against Shell but the appeals have taken 10 years so far. In one case it has taken a community 32 years so far to get justice.”

Shell’s lawyers respond that the Nigerian justice system has been reformed and speeded up and that its Nigerian subsidiary, SPDC, should be held responsible for any pollution rather than the parent company, Shell International. They claim that Ogale has also been heavily affected by theft, pipeline sabotage and illegal refining rather than failure of infrastructure.

The king and and his legal team from a UK law firm, Leigh Day, argue that a precedent was set last year when Zambian villagers were allowed to take an Indian company to court in London over water pollution by a subsidiary because the Zambian legal system was deeply flawed.

That pollution has occurred in Ogale from old Shell and Nigerian oil company pipelines is not disputed. Official records say there have been more than 40 major spills in the small Ogale kingdom over the years, of which 23 have been since 2011. 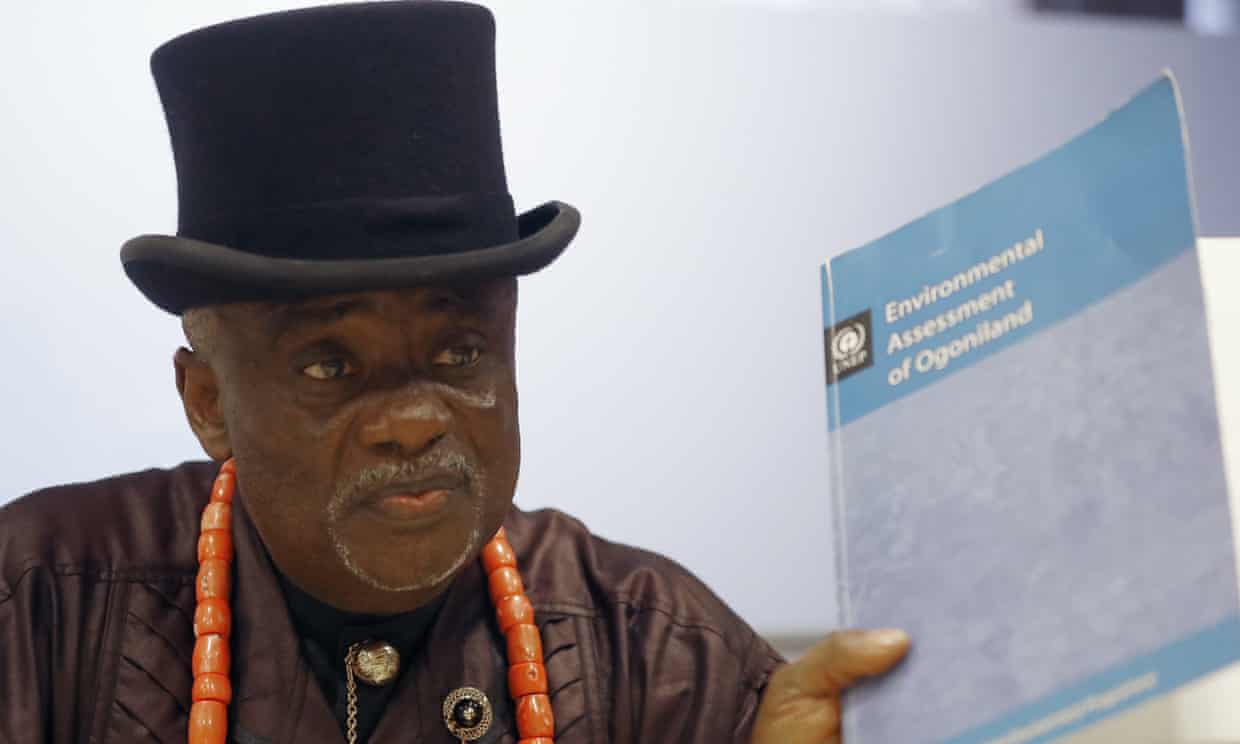 The king with the Unep report. Photograph: Frank Augstein/AP

In 2011 the UN environment programme (Unep) published a scientific study of pollution in Ogoniland which said it found oil spills happening with “alarming regularity” in Ogale, including groundwater contamination that is more than 4,500 times Nigerian recommended levels. Water samples taken in 2010 from three metres below ground were found to be contaminated with benzene and other chemicals.

King Emere offers a bottle of water taken recently, he says, from an Ogale borehole. The liquid smells powerfully of oil and tastes foul. “This is what we must drink. It is getting worse. We are getting strange illnesses. Our boys and girls cannot have children. We have strange deaths,” he says.

But the king says he is most saddened because he has witnessed the complete breakdown of trust between the company and his community. “I was a child of the 60s and 70s. We had a good relationship with the company. They would come with their Land Rovers. As little boys we would push them just to touch the Shell Land Rover. We used to go under the gas flare at the manifold to see the big beetles. We had no electricity. Our only lighting was the flare. We played there. When I was at primary school we used to run into the bush to get fruits, beautiful fruits. Now we have nothing.

“We did not know about pollution then. There were a lot of spills. We would see them and think nothing of them. We never knew that Shell was planting a time-bomb. We gradually realised things were getting bad in the 1980s and 1990s.

“Have we done well out of the partnership with Shell? No. They have dumped us. I got saddened as I sat in the court and watched them trying to create a distance between themselves and the consequences of pollution. I saw them trying to push the blame on to someone else.

“The truth is that Royal Dutch Shell has been responsible for the damage in my community. The same people we loved are killing us now.”