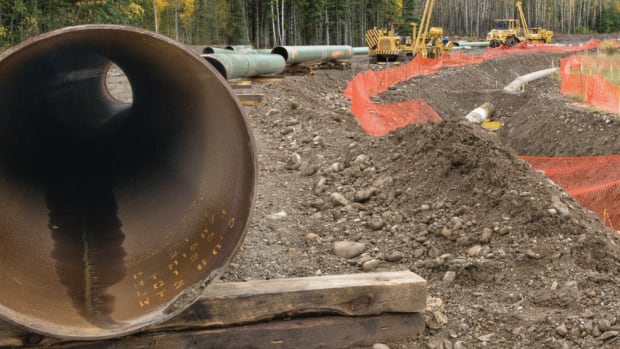 The cover image from the report from the Parkland Institute depicts a pipeline under construction. Author David Hughes says Canada has enough capacity already to handle a 45% increase in oil sands production and doesn't need new pipelines. (Parkland Institute)

Even with provincial climate plans in place, anticipated growth in Alberta's oilsands and British Columbia's natural gas sector will make it nearly impossible for Canada to reduce emissions to agreed-upon levels under the Paris Agreement, according to a new report.

"Short of an economic collapse, it is difficult to see how Canada can realistically meet its Paris commitments in the 14 years remaining without rethinking its plans for oil and gas development," author David Hughes, an earth scientist, said in a release.

The report comes from the Parkland Institute, a research centre within the University of Alberta, and the Canadian Centre for Policy Alternatives, a left-leaning think tank.

If oilsands production grows to Alberta's new annual limit of 100 megatonnes and B.C. builds the five liquefied natural gas (LNG) export terminals it is proposing, Hughes estimates it would be nearly impossible for the rest of the country to reduce emissions fast enough to compensate.

Meeting the Paris Agreement targets under that scenario would require everyone else to reduce emissions 55 per cent below 2014 levels, Hughes said.

If oil and gas grows at anticipated rates, the report's calculations suggest Canada can't meet its commitments under the Paris Agreement without unrealistic emissions reductions in other sectors. (Parkland Institute)

Even if just one LNG terminal is built in B.C., the report estimates emissions in sectors other than oil and gas would have to contract by 47 per cent by 2030.

Hughes also says in the report that new pipelines are not needed, as Canada has enough capacity with existing pipelines and rail lines to handle even a 45-per-cent increase in oilsands production, which would take the industry to the 100-megatonne annual limit under Alberta's new climate policy.

Alex Ferguson, vice-president of policy and performance with the Canadian Association of Petroleum Producers (CAPP), said the challenges Canada faces in meeting the Paris Agreement targets are well known, but the report fails to account for the role of technology and innovation in reducing emissions.

"If you look at the investments that we're making, the federal government is making, the provinces are making in the technology piece, that's truly the solution that's going to get us to that target," he said.

Ferguson said the oilsands industry fully expects to increase production in the coming years while staying below Alberta's 100-megatonne annual emissions limit through a variety of technological advances.

The report's projections, however, assume emissions per unit of production to be held constant at the average level from 2010 to 2014.

The report even describes that assumption as conservative, suggesting emissions rates are actually likely to increase in the future, "as bitumen is increasingly being recovered using in situ methods that produce more greenhouse gases than surface mining."

But Ferguson said the industry's growth depends on bringing per-unit emissions down, especially given the hard cap Alberta has imposed as part of its new climate plan.

"The amount and effort going into investing in the technology and innovations that are going to drive our ability to increase production over time and yet still stay under the emissions limit — that's the fundamental go-forward piece for this sector, and this economy," he said.

Here is the full report: