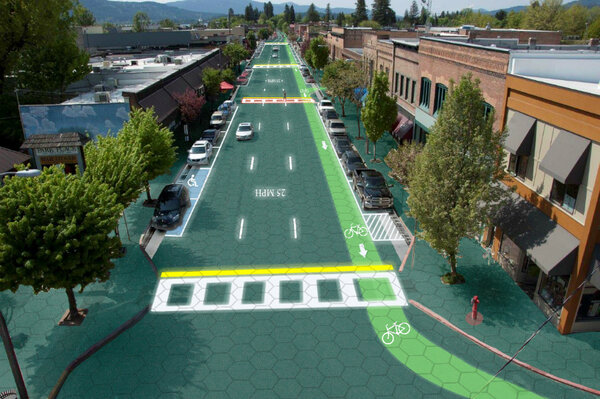 Artist's rendition of downtown Sandpoint, Idaho, with a road designed by Solar Roadway. The company is working with the Missouri Department of Transportation to test a solar road in Conway, Mo. Sam/Cornett/Courtesy of Solar Roadways/File

Solar Roadways is working with the Missouri Department of Transportation to install a stretch of solar road that could generate enough energy to power a rest stop...

America's iconic Route 66 is about to become part of a new solar system.

The Idaho startup Solar Roadways, created by husband-and-wife team Scott and Julie Brusaw, is working with the Missouri Department of Transportation (MoDOT) to install a section of solar panels at a rest stop on Rt. 66 in Conway, Mo. The aim is to see if the roadway can generate enough electricity to power the rest facility and potentially fund future projects.

"Solar roadways can hopefully create new revenue streams," said Tom Blair, assistant district engineer for MoDOT and head of the "Road to Tomorrow" long-range planning effort, local Missouri paper The News Tribune reports. "Technology already has changed how we think about different things in our lives," he said, "and it is going to disrupt everything that every one of us transportation leaders have experienced to date in our life."

Recommended: 40 iPhone tips and tricks everyone should know

As a company, Solar Roadways (SR) aims to generate renewable energy on any surface that can be walked or driven on, from roadways to sidewalks, driveways to bike and garden paths. A significant amount of solar energy is already hitting those surfaces, SR says, but doesn't go to good use – yet. Harnessing that power could be a step towards a smarter power grid and better infrastructure, they say, claiming that widespread use could significantly lower or eliminate consumers' electric bills and reduce greenhouse gasses by up to 75 percent.

40 iPhone tips and tricks everyone should know

The tempered glass hexagonal panels that make up their "roadways" weigh about 70 pounds and contain LED lights. The panels are textured for slip resistance and can warm up to keep roads free of ice and snow. In a parking area, or installed at a rest stop such as the one in Conway, the panels can also generate the lines for a basketball court or hopscotch.

The road test in Missouri has been at least five years in the making. In July of 2011, the Brusaws were awarded a two-year $750,000 contract by the US Department of Transportation, which allowed them to conduct more research and build the world's first prototype solar parking lot adjacent to their headquarters in Sandpoint, Idaho.

The couple's efforts gained global attention with a viral Indiegogo campaign, which got an extra boost from Star Trek actor George Takei on social media in 2014, with a promotional video by Michael Naphan that pulled in more than 20 million views on Youtube. The campaign netted $2.2 million in donations for further development on the project.

Creating the textured glass surface was one of the challenges addressed during that phase of development, according to the Solar Roadways' website, as they tested various textures and panel shapes before deciding in hexagons.

The use of solar panels for road surfacing may be new to the United States, but Europe is farther down the solar road.

In 2015, the Netherlands made headlines with the installation of the world's first solar road, a bike path that captured energy through glass-coated solar panels. After the first six months, the 230-foot test bike path generated 3,000 kWh, or enough electricity to power a small household for a year.

In France, the government recently announced plans to resurface 621 miles of roads with solar panels, using Wattway panels that were developed by road-building company Colas in partnership with the French National Solar Energy Institute.

However, the French panels are only designed for use in the generation of renewable energy. They function the same way a standard solar panel would work, but instead of taking up farmland or rooftops, they cover the road surface. Unlike Solar Roadways' hexagons, the Wattway panels are installed in sheets, and lack LED lights or heating.

While US solar enthusiasts may celebrate this first effort in Missouri, those who monitor the life cycle of traditional road constructions materials such as concrete and asphalt at the concrete sustainability hub for the Department of Civil and Environmental Engineering at Massachusetts Institute of Technology (MIT) in Cambridge, Mass., have a more jaded view.

"We can barely afford the upkeep on the asphalt and concrete we already have," says James W. Mack, PE Director, Market Development for CEMEX, the world's fourth largest supplier of concrete and redimix, in a telephone interview and research partner at the MIT hub.

"I don't want to naysay the innovations," Mr. Mack says in a phone interview from his office in Houston. "I love innovations. I'm an early adopter, but there are going to be some sustainability and durability issues. I wouldn't do the road surface. I'd run them [the hexagonal panels] down the shoulders first. They'll last longer."

SR, however, argues that currently most states' departments of transportation don't generate enough income through the gas tax to be able to keep up with road repairs.

"We are not preventing any roads or bridges from being built or maintained because of this pilot project," Mr. Blair of MoDOT told the News Tribune, adding that a successful test run could increase energy savings and contribute toward future needs.

"It is obvious that it is time to modernize the highway system and create the first roadway system with a return on investment (ROI)," SR says on its website. "In this way, two goals can be accomplished simultaneously: the creation of a modular, modern infrastructure while creating the renewable energy needed to effectively end the current dependence on fossil fuels."